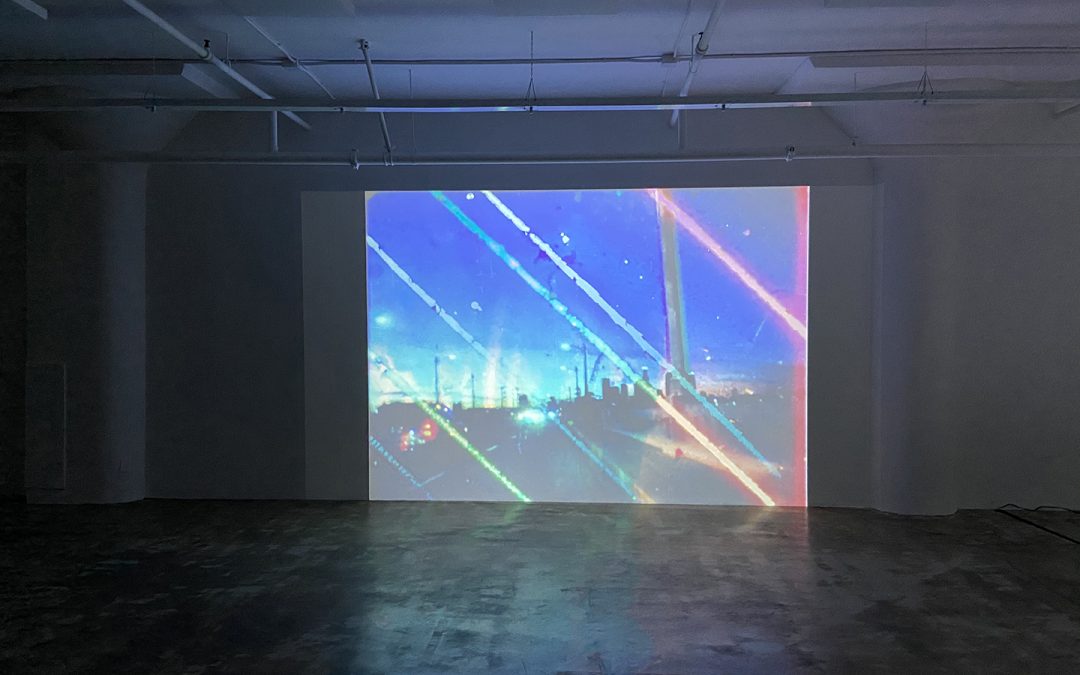 The centerpiece of Jennifer West‘s exhibition, Future Forgetting is a large projection of a nine-minute film originally shot on the banks of the Los Angeles River in 2016. Entitled 6th Street Bridge Film (all works 2020), it pays homage to the iconic bridge. Yet rather than celebrate its architecture and cultural significance, West indulges in the detritus of the location and the bridges impending demolition. She manipulated the footage more recently, purposely discoloring and damaging her original print by submerging it in the river, allowing the debris and algae to leave an imprint on the celluloid. The result is an abstracted representation, a quintessential experimental film that overlays the scene with pulsating colors and textures. Inspired by L.A. historian Norman Klein‘s text from 1997, The History of Forgetting, West infuses the varied works on exhibition with a sense of loss and nostalgia for those parts of Los Angeles that have been and will be erased. West is a thoughtful artist, dedicated to process and invested in history. Though best known for her “explorations of materialism in film,” she also creates installations and objects. Integral to Future Forgetting are pigment prints that composite black and white clips of the bridge culled from her original footage; hand-blown glass bottles filled with river water and found objects like circuit boards, film strips and torn photographs; a hand-bound, accordion-folding zine printed with fragmented texts about and images of the L.A. river, as well as a work that presents nine flat-screen monitors tethered across the floor. Entitled Archaeology of Smashed Flatscreen Televisions Thrown off Bridges, this piece consists of short video loops shot from above, showing objects West collected along the Arroyo Seco confluence in South Pasadena. West observed numerous broken monitors there (presumably thrown from the surrounding bridges) and began to assemble a collection of discarded electronics. She interpreted these shattered remains as the result of acts of violence against technology. West preserves the memory of the objects by filming them against a colored background (a green screen that due to a glitch, shifts from green to magenta) and displays them larger than their actual size on monitors scattered over the gallery floor. Atop each screen are the actual objects, creating an eerie conversation between the object and its filmed doppelganger. For example, on one monitor West has placed a cracked cell phone. This small object sits on a blown up, filmed version of its broken glass screen. Similarly, against a bright magenta background sits an array of plastic parts almost silhouetted against the glowing monitor. As the background imagery ebbs, flows and flickers (an ever-present reference to film), the work grows more surreal. It is as if the objects are part of a sci-fi dreamscape; West’s cat even traverses the screen. The experience of this work is akin to walking through a dilapidated electronic garden filled with fragmented artifacts that are representative of consumer technology and our ever-growing distance from nature. West’s enigmatic installation evokes the past, as well as the future— when Los Angeles may become a ragged dystopian landscape. This imagery particularly resonates now as we are in the midst of a world-wide pandemic, and in our forced isolation, we have become immersed and dependent on this problematic, yet essential technology.

Jody Zellen is a Santa Monica-based artist and writer. She has been writing art reviews for more than 25 years and currently contributes to Artillery, ArtScene, Afterimage and Art and Cake. For more information on her art and writings please visit www.jodyzellen.comContent goes here