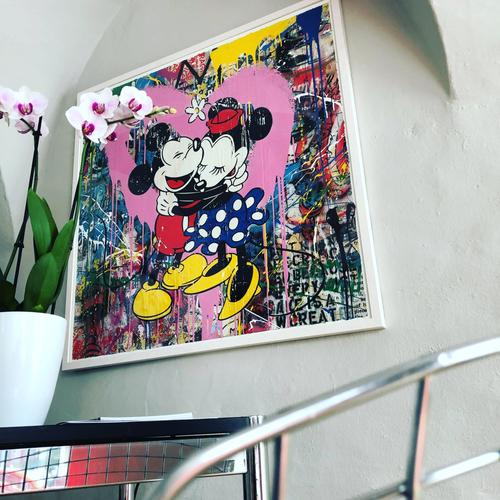 The artist Thierry Guetta, also known as Mr. Brainwash, is temporarily turning the former Paley Center for Media in Beverly Hills, designed by the architect Richard Meier in 1996, into his own museum. The French-born artist, who lives in Los Angeles, sealed a contract this week that allows him to lease the building, which was purchased by luxury brand LVMH for $80 million in 2018, until it and two other plots of land acquired by the company on North Rodeo Drive are converted into a hotel.

“It’s a dream come true; I still can’t believe it,” says Guetta, who traces his unexpected rise as a street artist in Banksy’s Oscar-nominated documentary Exit Through the Gift Shop 2010. “We’re in 2020 and it feels like I’ve reached my 20/20 vision. Whenever I see something, I’m lucky enough to see it.”

While the details are still being worked out, Guetta says he plans to show only his works in the museum at the opening in spring, before inviting other artists to solo and group exhibitions and ideally organizing thematic exhibitions with loans from institutions and pieces from his personal collection, including works by Banksy. He says it is important that some experiences remain free. “I might organize a few private events first before I open myself up to the public,” he adds.

Galerie Frank Fluegel has represented the artist Mr. Brainwash in the German-speaking world since 2012. During the winter months, new works, all unique works on paper, will be shown at the branch in Kitzbühel. Most of Interest are his works “Einstein”, “Every Day Life – Follow Your Dreams”, or “Kate Moss”.

Born in 1966 as Thierry Guetta in Garges-lès-Gonesse near Paris, he has lived in Los Angeles since the age of 15. His first exhibition “Life is Beautiful” took place in Los Angeles in 2008 and quickly became a crowd puller with more than 50,000 visitors. In 2009 Madonna commissioned Mr. Brainwash to design the album cover of “Celebration”.

In 2010,  Mr. Brainwash became famous through the award-winning and Oscar-nominated documentary “Exit Through the Gift Shop”, in which he accompanied his friend and street art legend Banksy at work. This also brought him into the street art scene and he began to create art. From that moment on Mr. Brainwash was a phenomenon, a superstar, who conquered the art world in record time.

In February 2010 the second exhibition “Life Is Beautiful: Icons” opened in New York on 1,400 m2 and was sold out after a few days. Numerous exhibitions followed in England, Germany, France and most recently in Seoul. A longer interview has just been published in the Paris Match.

With stencils stencil graffiti as well as silkscreens and motifs of pop culture analogous to Warhol, the artist has brought Urban Art from the street into the living room and merged both art movements. The surprising works mix bright colors in any combination with sometimes controversial content. The whole thing is executed in mixed media with spray paint, painting and collage technique and enriched with ironic allusions, behind which a political-social message is often hidden.