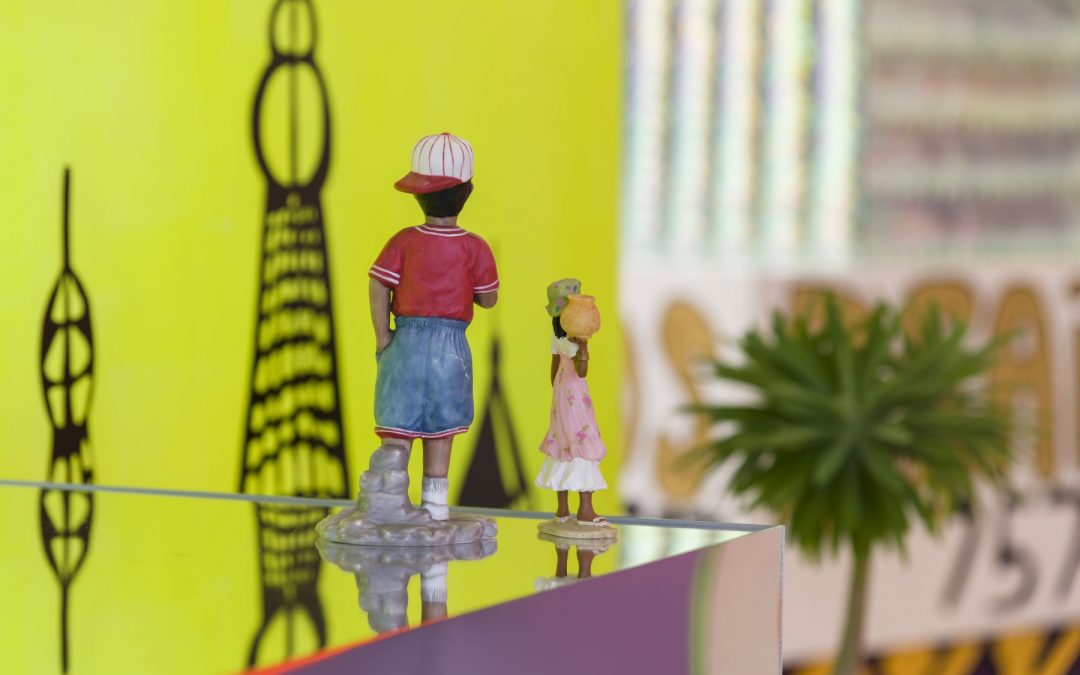 Walking into Lauren Halsey’s latest exhibition at David Kordansky is like being transported to an electric – and simultaneously nostalgic and futuristic – maze. A Los Angeles-born contemporary artist, Halsey tends to explore her home city: its buildings, its businesses, its culture, its people. In this new exhibition of “sculptural painting installations,” South Central L.A. is brought West. It is that very idea of movement that is so prevalent in the conceptual nature of Halsey’s oeuvre – more particularly, the gentrification and displacement of businesses by people of color. Halsey, trained in architecture, has had her work exhibited around Los Angeles and the world: In 2018, she was featured in the Hammer’s Made in L.A. biennial exhibition and also installed at MOCA. In 2019, she was the subject of a solo exhibition at Fondation Louis Vuitton in Paris. Her MOCA installation was, like her current work at Kordansky, a system of works “that viewers are invited to linger in and explore….  [an] environment [that] will serve as a visionary archive reflecting the diversity of everyday black cultural experiences in South Central L.A., the artist’s home since childhood” (MOCA). The gallery writes that, “in contrast with Halsey’s most recent exhibitions, where architecture was scaled for human use (The Crenshaw District Hieroglyph Project at the Hammer Museum, 2018–2019) or immersion (we still here, there at MOCA, Los Angeles, 2018), the new works take a more dreamlike approach to size” (David Kordansky). The Black History Wall Of Respect

Upon entering the space, viewers are immediately met with neon colors, bold signage, and familiar figures – from Egyptian-derived iconography and The Delfonics to even Chester Cheetah. Some of these large sculptures have gradient surfaces, some reflective ones, with most featuring text and graphics. Phrases, including, “HIGHLY FLAVORED,” “Black ‘N Beautiful” and “BLACK WORKERS RISING! FOR JOBS JUSTICE & DIGNITY” decorate the installation. It reads like a condensed city, or as Halsey herself describes, a “South Central L.A. business taxidermy.” Taxidermy implies some sort of death, and though these sculptures are visually appealing in their size and luminosities, they are decidedly not plainly aesthetic. They are, rather, commemorative; some featuring businesses that no longer are operating in South Central L.A., while others bear slogans from uprisings that took place in the 1960s and 1990s. The structures may advertise, “Shampoo Flatiron or kurls, $29.99 & up” or read, “Walk-ins Welcome,” but they are in most cases closed, rectangular pillars around which viewers may walk, but cannot enter. The social consciousness that this installation embodies – and prompts viewers to feel – exceeds beyond awareness of the erasure of Black businesses and, indeed, extends to a  very understanding of the role of cultural memory. As Halsey herself described in an interview with Mark Pieterson: “I view history, cultural memory, and the archive I’ve been gathering for over ten years as tools that can be used to mobilize people towards liberation. I see them as anchors for the process of describing and proposing new spatial paradigms and narratives…I’m interested in creating legible, real representations of who we were centuries ago or five minutes ago, and of who we can become five seconds from now or one hundred years from now. I’m interested drawing connections among multiples histories and collective experiences of neighborhoods to consider the here and now, as well as past and potential futures. I truly believe that the process of archiving a place and remixing the content back into that place can be empowering” (ArtNews).