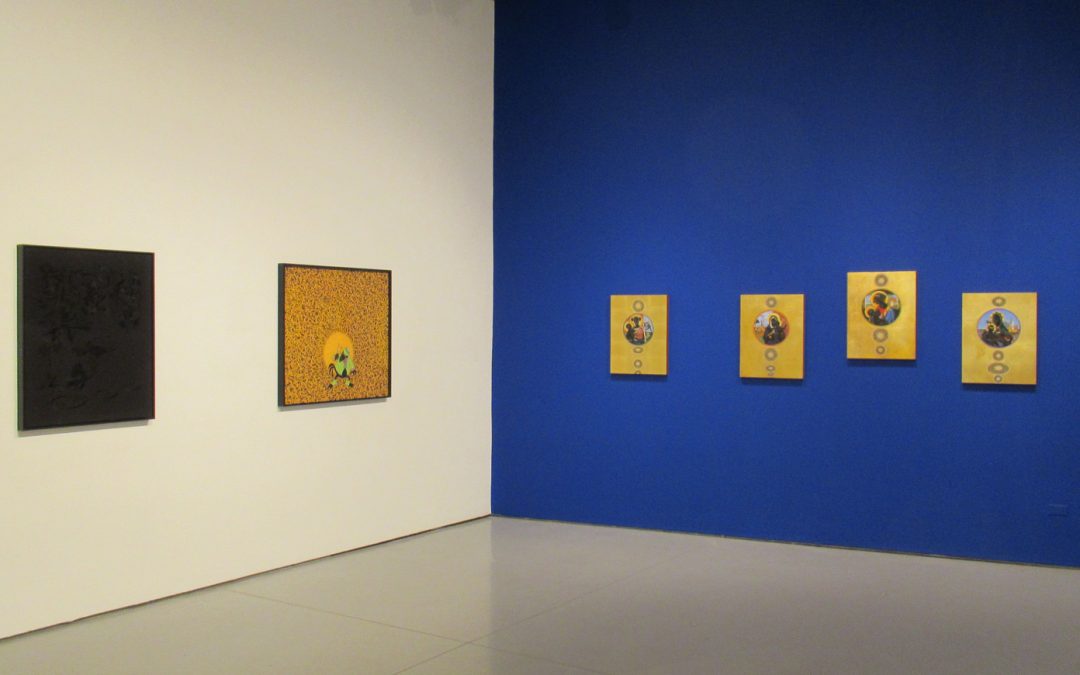 To make one’s mark is an ancient impulse. Indeed, the earliest known design made by humans to communicate this existential urge is the ochre cross-hatching marks found on a rock in the Blombos Cave in South Africa that date back 73,000 years. Today, graffiti and street art are the languages that represent the most egalitarian and democratic forms of expression, communicating with swift graphic clarity the ideas and stories that artists intend. ​In their duo show at California State University Northridge (CSUN) Main Gallery, Graphic Subversion, Mark Steven Greenfield and Mark Dean Veca both use an approach to their art that draws directly from this kind of graphic language. Spontaneous marks flow from their hands onto paper or canvas in an explosion of visual energy. The visual power of pattern, cross-hatching, dots, circles, X’s and a multitude of other marks that the mind and eye can process with a vivid alacrity, alter one’s consciousness. Veca’s work is focused on images that address cultural icons, while Greenfield’s work makes statements about racism and the history of slavery in America. Curator Betty Brown has said,“Their work urges us to not to accept media images as neutral, but to explore the nature of their history and impact, and what they communicate both overtly and covertly.” Veca utilizes a visual language that reflects the graphic style often found in comic book art or graphic novels reminiscent of Zap Comix and Robert Crumb. The exhibition also has several pieces that use iconic images: Great Painting employs Tony the Tiger imagery from cereal advertisements; Sorry Charlie references Charlie the Tuna, a mascot used to sell canned tuna fish. There is a drama to these isolated, black and white figures that is in stark contrast to the vibrant fields of cadmium red or citron yellow, thus altering our perception and becoming a vehicle for Veca’s virtuosity to lay down marks in an unpremeditated pattern, in addition to shedding light on these artifacts of our consumer-obsessed culture. They are not exactly menacing, but there is an unnerving power to the undulating patterns that articulate the figure, often resembling viscera, orifices and other bodily references. Perhaps the shadow of our mortality is cast upon these images whose happy faces are meant to market products using the power of commerce and money to manipulate desire. Greenfield examines stereotyped images of African Americans in our culture. His work is sometimes brutal in the stories he tells of racism. Like Veca’s, Greenfield’s marks are also spontaneous outpourings of graphic energy. A group of portraits make use of racist clichés, including black facial characteristics. Lips, hair and other attributes often used to stereotype African American features create complex images, with layers of content added through suggestive associations. Lightning bolt-like marks, clean geometric circles and passages that resemble musical notations animate these tour de force drawings. One can see both the intention behind the image as a political statement and the critique of these negative forms of representation. But Greenfield also revels in the magic of creation, with a kind of visual music emerging in his patterns and improvisations that add another layer to the content.

In his newest work, Greenfield uses classic Renaissance images of the Madonna and Child to address our current political climate. A powerful image of a Black Madonna and Child are placed in a circular area within a gold-leafed field. Two or three areas are filled with his signature graphic marks that tag the image. Behind the Madonna and Child are various scenes of a Ku Klux Klansman being lynched, or Nazis in a fiery explosion – scenes of retribution toward those whose racist, genocidal agendas have caused the death and torture of countless souls. This is a powerful exhibition and an excellent pairing of two artists whose stylistic approach shapes the content of their work, demonstrating how the graphic power of the mark has developed into complex patterns of language – from an ancient impulse to leave a record of our ideas and stories to a populist expression whose graphic power communicates the strange complexity of the image in our contemporary world.

Gary Brewer is a writer, painter and curator living in Pasadena. He is a regular contributor to Art and Cake and has written for Hyperallergic Magazine.