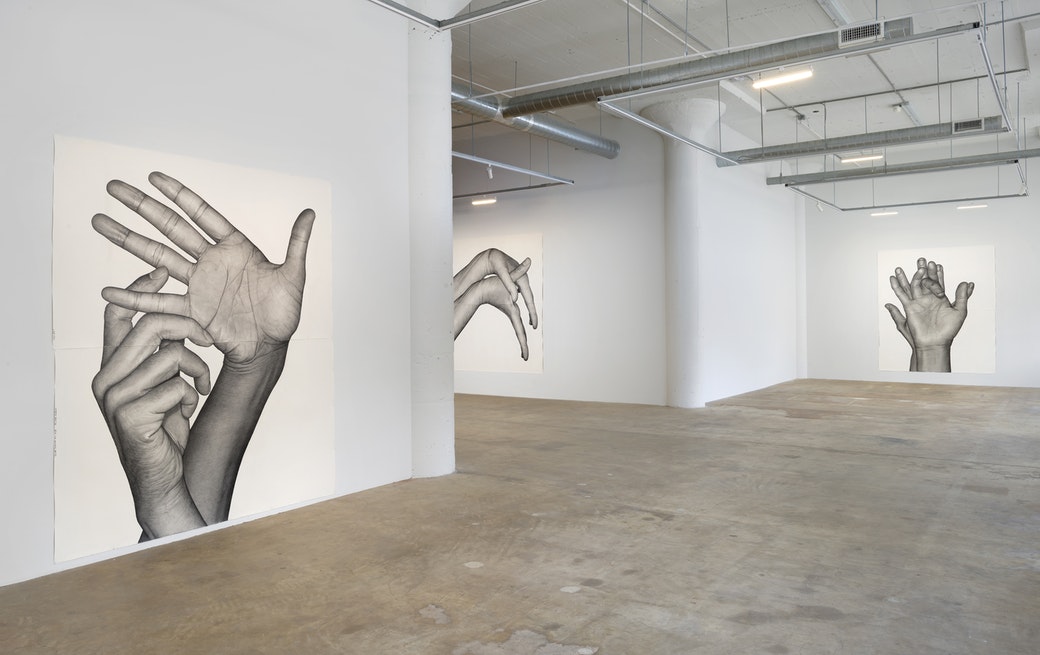 Many years ago, in a ranging wind storm, Karl Haendel and I played tennis. A few years later, I asked him about his tennis game and he replied that sadly he had to give it up as he needed to protect his hands for drawing and could not risk injury. That dominant hands of his artist friends are the subject of his latest exhibition reminded me of our tennis game and got me thinking about the compromises artists sometimes have to make in order to create their work. For Double Dominant, Haendel has created 24 monumental drawings that will be presented as a two-part exhibition, where twelve drawings are on view at a time. Each drawing is a mural-scale depiction of a set of hands. At first glance, the pair along with a small part of the wrists, seem to be a right and left hand. However, it soon becomes evident that Haendel has created an impossible combination, presenting the dominant hand of each artist twice, configured as if they could be a functioning pair when in reality the combination of hands is awkward and impossible. Haendel is a talented draftsman with a knack for realistically rendering just about any subject with a pencil. His early works and installations featured arrays of appropriated imagery from myriad sources that were redrawn by hand and recontextualized through juxtaposition. Personally, I have always been awestruck by the way Haendel puts pencil to paper— the details and sensitivity of his rendering is evident, as is his amazing sense of composition and how the images fill the page. He seems particularly interested in the relationship between positive and negative space. Lately, his subject matter has transitioned from objective re-presenations of imagery culled from the news media, to more subjective and personal images of the body that investigate issues of identity. In describing the Double Dominant project in the gallery press release, Haendel talks about its inception and the first drawings he made. He mentions noticing the hands’ sculptural presence, as well as thinking about the interplay of touch, intimacy and power. The drawings in Double Dominant can be thought of as portraits, as well as homages to his artistic colleagues. Haendel begins by making photographs. He then digitally combines the photographs to create a composite image and then uses pencils to convert this fantasy image into a large drawing that extends across two very large sheets of paper. It takes a moment to register that he has depicted the same hand twice, but once that becomes evident it is amusing to try to understand the nuances of the juxtapositions. Whether the actual hand-gesture is a sign or a signal is less the point. How the two hands work together to define the space is more in keeping with Haendel’s intentions. In Double Dominant 9 (Analia Saban), (all works 2019) the two hands seen from the side gracefully arc across the paper, whereas in Double Dominant 20 (Rafa Esparza) the two hands are arranged so the fingers from both hands merge to form a small rectangle. Double Dominant 12 (Jennifer Bornstein) presents the two hands in an implied sequence of before and after— thumb tucked into the fist, then extended. These gigantic depictions of hands are a bit de-centering. They bisect the picture plane from the edges and dominate the space, becoming uncanny representations of something normally quite familiar. Haendel’s drawings are not concerned with the art these hands create, but rather the importance of the hand as a tool capable of creation that is sensitive to touch and capable of intimacy.