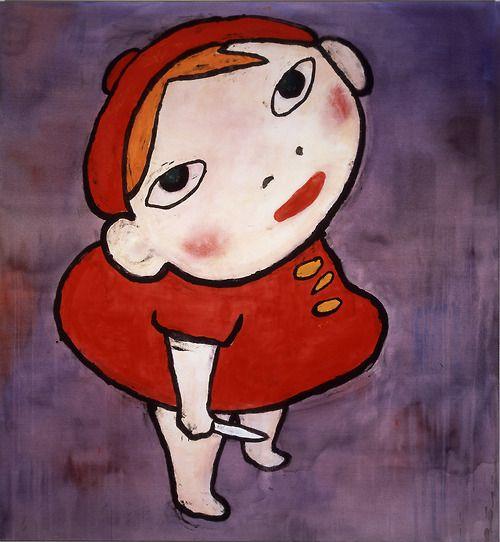 Yoshitomo Nara, The Girl with the Knife in Her Hand, 1991, Vicki and Kent Logan, fractional and promised gift to the San Francisco Museum of Modern Art, © Yoshitomo Nara 1991, photo by Ikuhiro Watanabe, courtesy of the artist

The Los Angeles County Museum of Art (LACMA) will present Yoshitomo Nara, the first international retrospective of artist Yoshitomo Nara (b. 1959). The exhibition, April 5- August 2, 2020, surveys more than 30 years of the artist’s work—from 1984 to 2020—through the lens of his longtime passion to music. Known for his portraits, Nara’s subjects are vaguely ominous-looking characters with penetrating gazes that occasionally wield objects just as knives or cigarettes, as well as heads and figures that float in dreamy landscapes. Nara’s oeuvre reflects the artist’s raw encounters with his inner self, taking inspiration from memories of his childhood; music; literature; studying and living in Germany (1988–2000); exploring his roots in Asia; and modern art from Europe and Japan.

Yoshitomo Nara comprises more than 100 major works, including paintings, drawings, sculpture, ceramics, an installation that recreates his drawing studio, and never-before exhibited idea sketches that reflect the artist’s empathic eye. One of the exhibition highlights includes Miss Forest, a 26-foot outdoor painted bronze sculpture that will be installed on Wilshire Boulevard.

“Yoshitomo Nara is among the most important Japanese artists of his generation, and one of the most recognized artists working today. We are excited to be organizing this international retrospective,” said Michael Govan, LACMA CEO and Wallis Annenberg Director. “Nara’s art reflects his interest in art and culture of both past and present. His interest in art history — ranging from 12th-century Japanese Buddhist sculptures and handscroll paintings, Italian early-Renaissance painters, and other European modern influences — mirrors LACMA’s encyclopedic nature. Referencing contemporary music and album covers, Nara possesses the unique ability to capture a complexity of emotions that reflects the cultural psyche of the current generation.”

Exhibition curator Mika Yoshitake stated, “Music has been a passion for Nara since he began to listen to folk songs at age nine, and his relationship with music, namely with album cover art, provided him with an unconventional introduction to art history and artistic genres. This passion is seen through Nara’s vast record collection, selections of which visitors will see as soon as they enter this exhibition. Through more than 100 works on view, the exhibition will bring new light to Nara’s conceptual process.”

The exhibition is accompanied by a fully illustrated catalogue with a foreword by Michael Govan, introductory essay by Mika Yoshitake, and text by Yoshitomo Nara. A limited-edition of the catalogue features a clamshell case with 14 booklets, as well as a vinyl LP with original music and covers by American indie rock band Yo La Tengo on side A and songs from the 1960s and ’70s selected by the artist on side B.

Nara’s love of music ended up providing him with an unorthodox art education: the images on record covers not only became signifiers for music but also introduced him to a vast array of artistic genres, with covers and their corresponding music merging in his subconscious. For the young Nara, growing up in Japan among the shadows of war and economic recovery, the records and their covers served as sources of escape and eventually as a valuable form of self-empowerment, allowing him to deal with the complexities of living with the remnants of Japan’s imperial past and in close proximity to signs of ongoing conflict.

Today, Nara’s studio wall displays a vast array of records he has accumulated over the past 40 years, including folk, rock, blues, soul, and punk albums. This exhibition aims to move away from some of the dominant perceptions of Nara’s work with Japan’s Neo-Pop movement (largely associated with Takashi Murakami), and also shift the focus from the harshness and intensity of his earlier practice to the self-critical introspection and individuality that have become more prevalent in the quiet, contemplative work he has made in the last decade, particularly since the 2011 Tōhoku earthquake and tsunami. The artist’s inspiration from the world of 1960s and ’70s folk and rock music filters throughout his practice.

After taking several lengthy journeys to Europe in 1980, 1983, and 1987 while attending art school at Aichi Prefectural University of the Arts where he obtained his BA and MA, Nara was accepted into the Kunstakademie Düsseldorf and lived in Germany from 1988 to 2000 (Düsseldorf from 1988 to 1993 and in Cologne until 2000). This was a period of great isolation for Nara, during which he was reminded of his adolescent years in Aomori, and the development of psychological depth and introspection in his paintings. While Nara’s immense popularity within the Neo-Pop milieu has dominated the critical global reception of his practice to this day, having spent his formative years as a young artist in Germany, Nara sees his work more in dialogue with American and European subcultures.

Girl with a Knife in Her Hand (1991) is one of the most iconic works in Nara’s oeuvre, focusing on a single, ominous figure with eyes who floats in an empty atmosphere. Representing a turning point in which Nara no longer illustrates the backgrounds of his artworks, but instead concentrates on the figures themselves, the artist intensifies their gazes by experimenting with sideways stances and slightly off-center placement, and bringing them into a bolder, fuller focus against monochromatic backgrounds. “These works were born not from confronting the other, but from confronting my own self,” the artist has said.

No Nukes (1998) depicts a stern, pigtailed girl holding placard that reads, “No Nukes.” Painted over a promotional poster for bossa nova musician Vinicius Cantuária’s Amor Brasileiro (1998) among other printed ephemera, it became powerful symbol in July 2012 when the artist allowed protesters to download a high-resolution image of the work to use as picket signs during one of Japan’s largest anti-nuclear protests. As many as 100,000 people gathered to rail against the government’s decision to restart two nuclear reactors in Fukui prefecture, many with this image, dubbed “No Nukes Girl,” in hand.