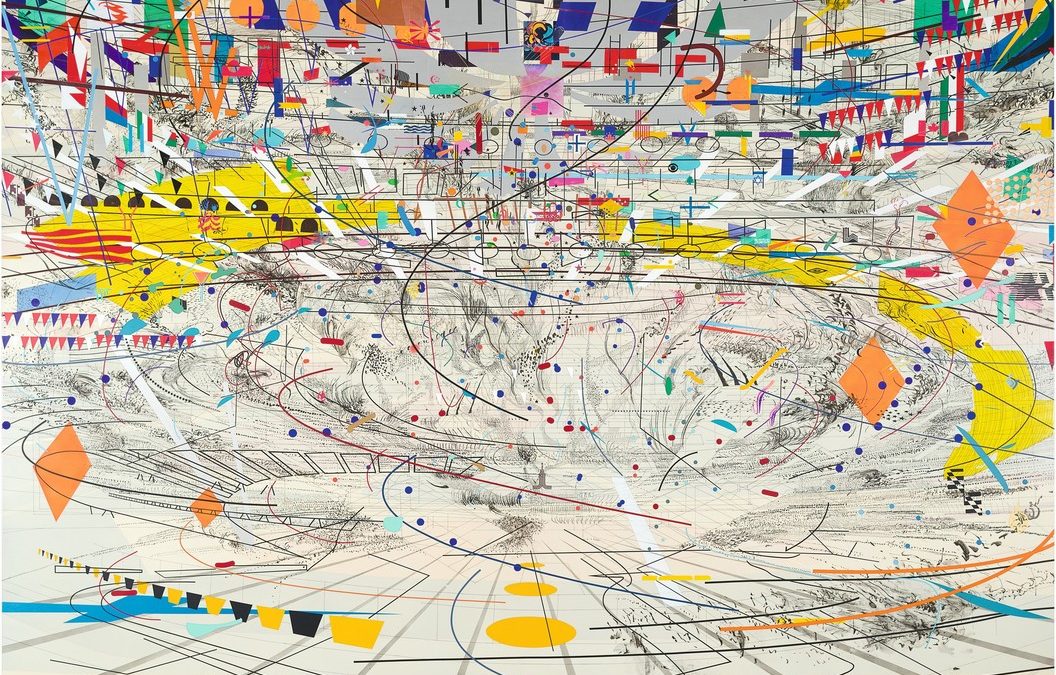 While Julie Mehretu‘s works appear to be geometric abstractions, they are rooted in representation. Mehretu culls through the media and often uses news imagery as the basis of her explorations. While it is difficult to trace a one-to-one correspondence between the original image and her transformation, Mehretu speaks about the political and social resonances in her work. On view at LACMA is a compelling trajectory of paintings, prints and drawings spanning 1996 to the present. This survey illustrates that while the works have changed visually, her underlying principals and motivations have remained consistent. 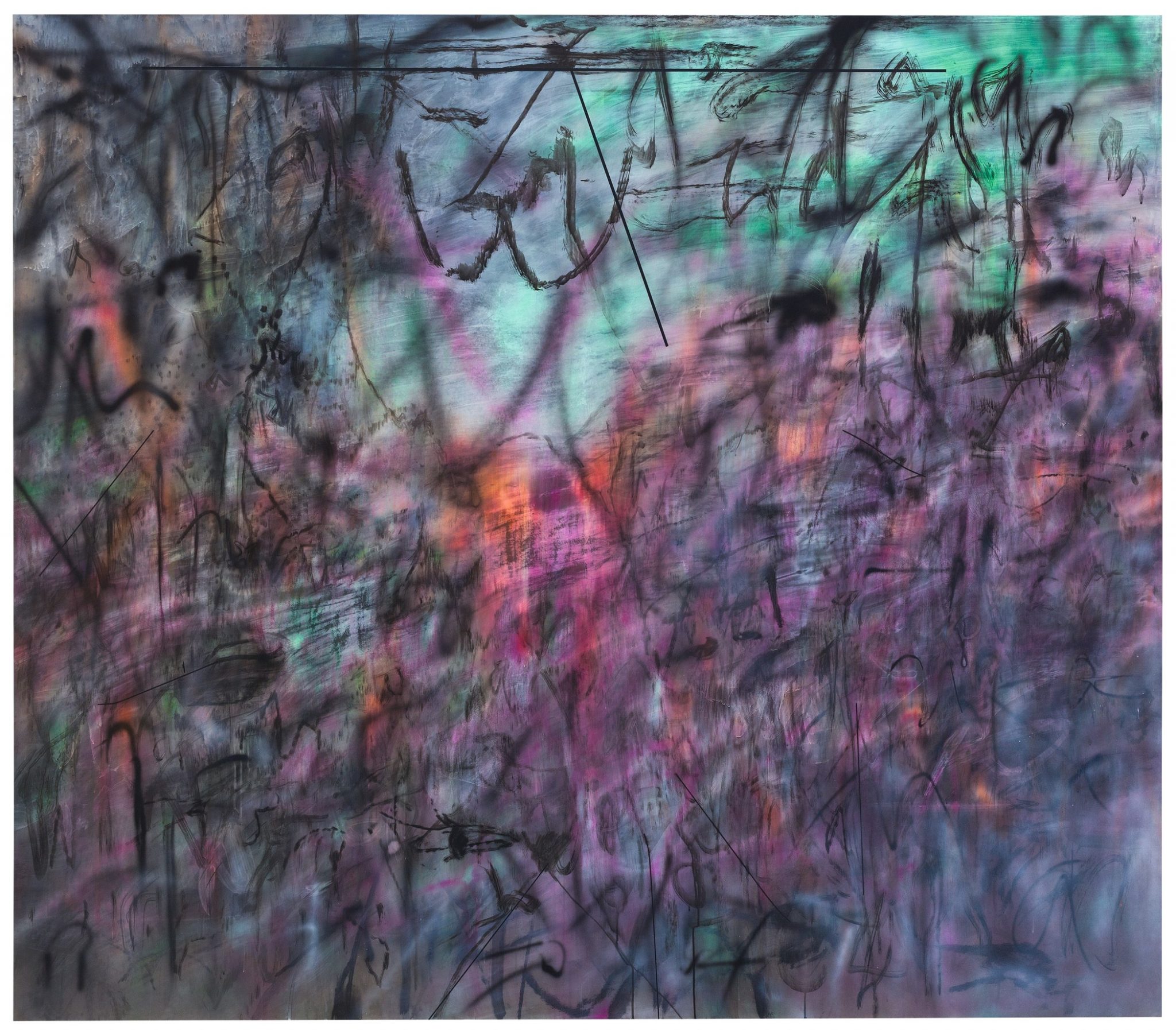 Mehretu’s paintings are most impressive when large-scale and in the vast space of BCAM Level 1, is the mural sized, four-part painting Mogamma (2012). This work is “quintessential” Mehretu as it layers her iconic imagery— fragments from different styles of architecture with a flutter of gestural lines to create a synthesis of abstraction and representation. These monumental paintings take time to view. It is interesting to think about shifts in scale when looking at her pieces. 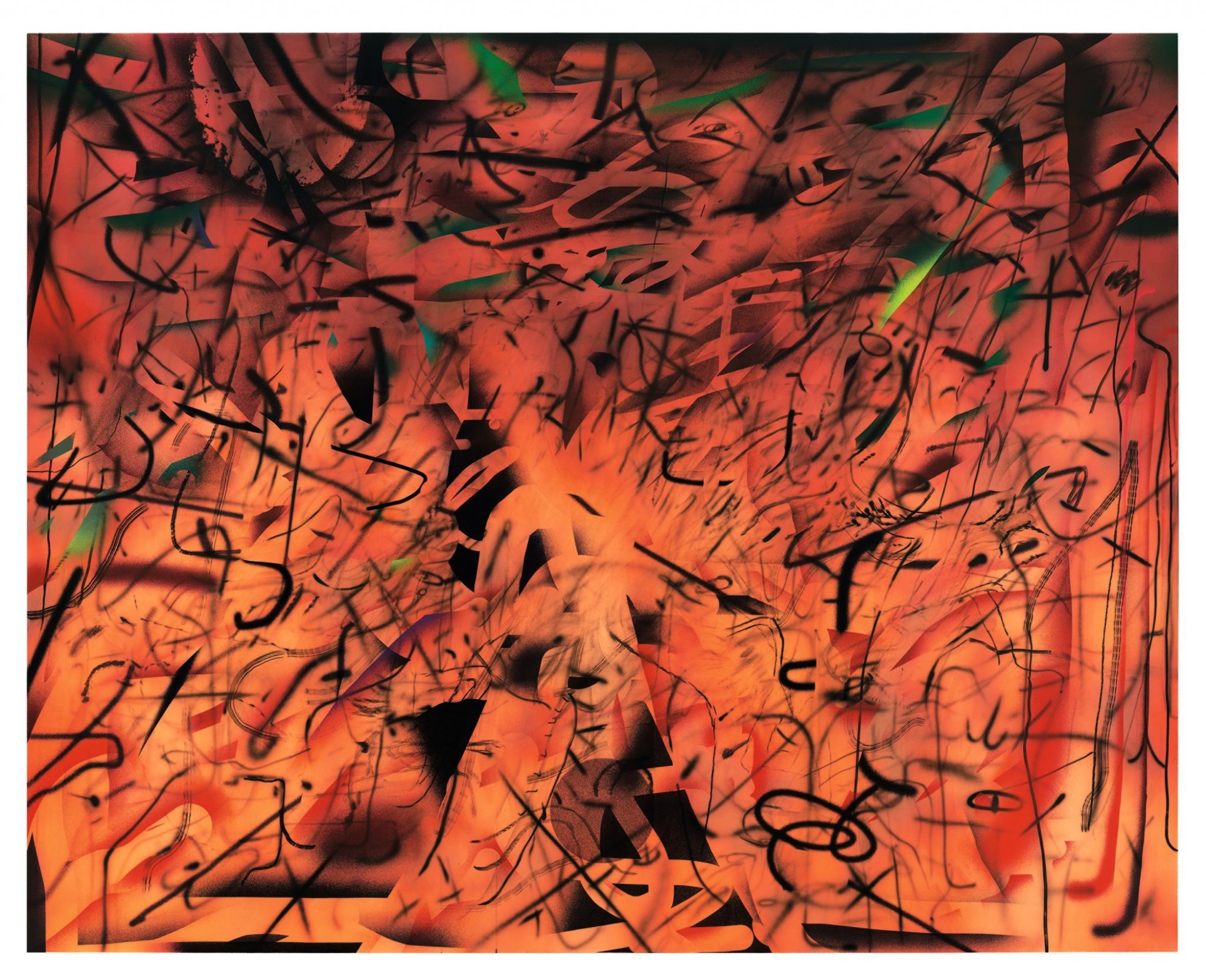 Moving from large to small within Mehretu’s ouevre allows viewers to appreciate the nuances of her practice and how line, shape and color work together in each composition and how the size of the canvas or paper dictates how she fills the composition. Many of her early drawings are maps that explore migration patterns and social systems as well as architectural structures. These later morph into images of architectural structures while retaining a sense of movement and flow.

At the base of Mehretu’s paintings and works on paper is her keen sense of observation and an uncanny ability to abstract the “real’ world into gestures and diagrams that reference that which exists outside the studio, be it architecture or current events. At their core, the works are political and poignant, while simultaneously embracing the language of abstraction. It is a pleasurable experience to get lost in a painting such as Renegade Delirium (2002) a tornado of overlapping shapes and colors that fly across the surface. Here, exploding architectural fragments, billowing smoke and colorful shards meld together to create a dynamic composition. 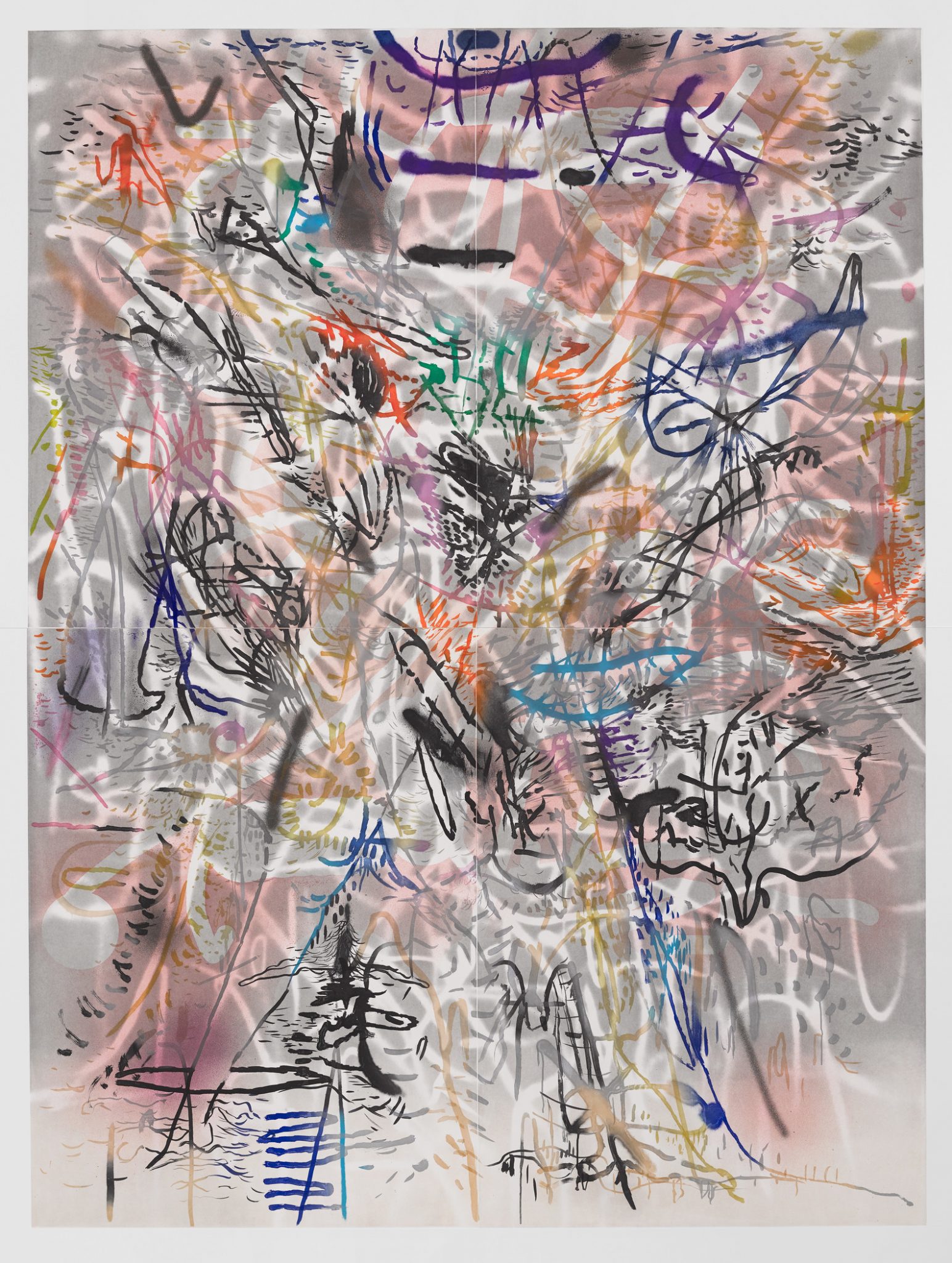 It comes as a surprise that Mehretu’s pieces are so flat.Though they are densely layered, the surfaces do not build up. It is as if the paint and ink have been absorbed into the substrate that holds them, allowing for an endless melange of overlapping details. The explosive and energetic works are full of motion. There is no pause or rest for the eye, and it is exciting and rewarding to discover formal relationships that surprise as one scans the works from left to right, top to bottom, as well as in scattershot pulses. 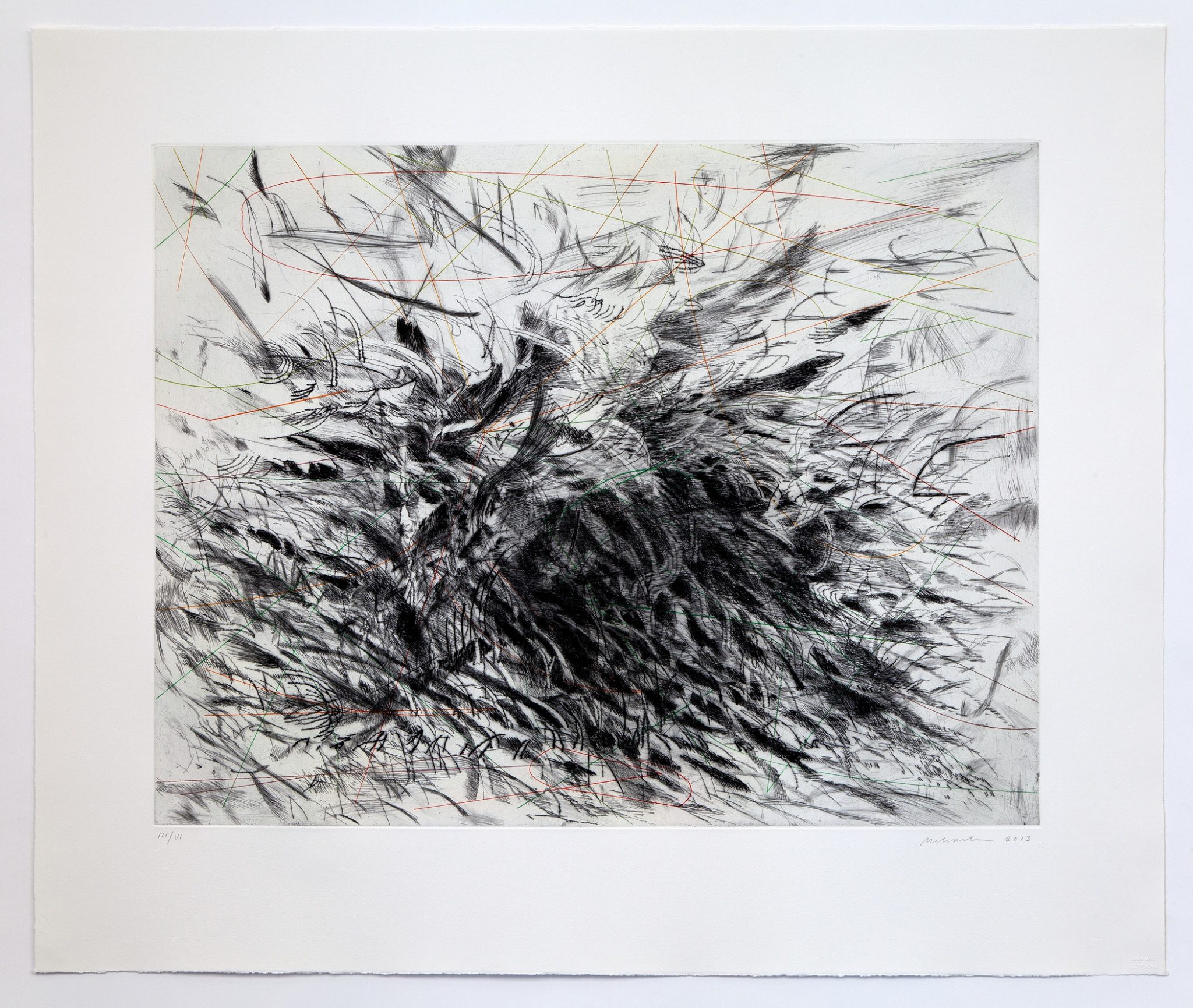 The most recent works are unexpected and an exciting new direction. These pieces begin as blurred news images— pictures of fires, violent acts or tragic crimes. Less frenetic and more richly colored, they offer a more open space for contemplation. Hineni (E.3:4) (2018) takes its point of departure from a press photograph of the California wildfires. The blurred orange and red hues serve as a background for Mehretu’s gestural black lines and geometric shapes. She transforms an image of violence and destruction into something sublime. Similarly, in When Angels Speak of Love (Barcelona) (2018), the referent is a news image of a political protest in Spain. The original photograph is enlarged, blurred and rotated 90 degrees. The figurative aspects of the image appear to be both traced and erased, becoming fluid gestures that suggest the tensions and impending violence suggested within the photograph.

Mehretu’s works are magnificently crafted, rich, dense, flamboyant and quite beautiful to behold. Yet, she wants them to resonate beyond their formal qualities and infuses them with subject matter and purpose that is not always obvious. It is the tensions between abstraction and representation that give the paintings their edge, allure and mystery. What makes Mehretu’s work extraordinary is her unique genius in orchestrating a rigorous and compelling transformation of the substance of life into the formal qualities of art.