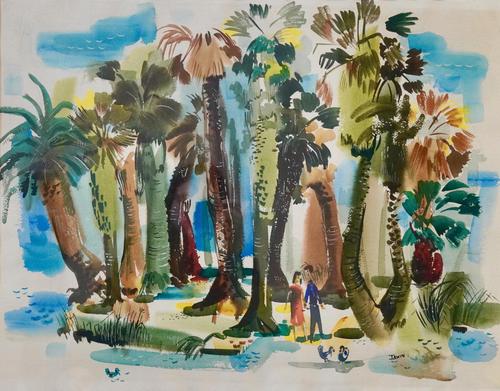 Mat Gleason (Coagula Curatorial) and Dave Tourjé (Chouinard Foundation) have joined forces to curate a “mini” Museum Show at the 2020 edition of the LA Art Show in the Los Angeles Convention Center. The booth will dig deep into the Chouinard Foundation’s archive of historic works by midcentury masters such as Frederick Hammersley, Ynez Johnston, John Altoon, and Emerson Woelffer.

Early works by Llyn Foulkes and an unseen 1952 signed watercolor fantasyscape by Light and Space master Robert Irwin will also highlight the booth. “This Irwin serves as an entry to his work,” said Mat Gleason, “This picture captures his interest in light and space – and landscaping as fine art – with the vocabulary of a pre-modernist 23-year-old. That he was groundbreaking in how he expressed these concepts and visions in ways they had never been seen before is why he matters; that he made work prior to those breakthroughs which approximated the same concerns in a more conventional approach reaffirms Irwin’s commitment to the content of his work, as opposed to being an artist who just wants to be radical for radicality’s sake. He really cared about light and space even when he was a 23-year old art student.”

Tourjé concurs and is even MORE emphatic, “There aren’t many early works by Irwin, speculation is he destroyed what hadn’t been sold or given away, and so this has a “Rosetta Stone” quality to it. This painting is literally Chapter One in the Robert Irwin story and it happened at the Chouinard School of Art and our booth at the fair gives people a taste of what that might have been like, the company one would keep.”

Irwin was just 23 when he enrolled in Chouinard when it was still The Chouinard School of Art, before it becomae the Chouinard Instirute of Art in partnership with Walt Disney. It would eventually jettison its past and become The California Institute for the Arts, Cal Arts. The Chouinard Foundation seeks to preserve the history of the school and conect it to more contemporary dialogues.

This Chouinard “Museum in a Booth” will further illuminate the impact of Nelbert Chouinard, Los Angeles’s pioneering woman of art education who founded the original Chouinard School of Art in 1921.  Gleason and Tourjé plan to mount a larger Chouinard masterworks show in 2021 and this small exhibit in the Coagula Curatorial booth will provide a glimpse into their progress on that.