Beauford Delaney and James Baldwin: Through the Unusual Door 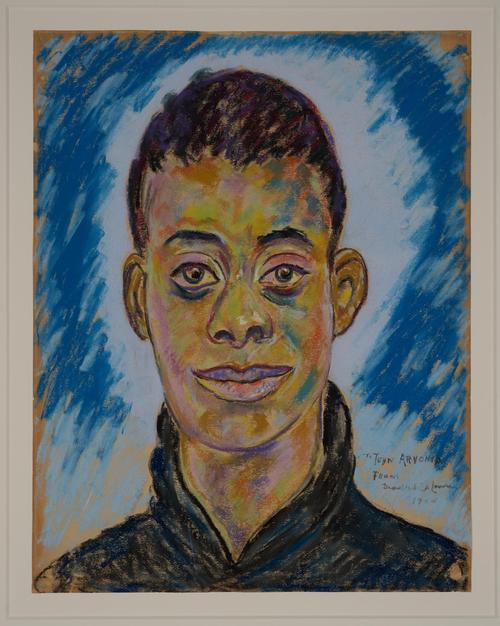 The Knoxville Museum of Art presents Beauford Delaney and James Baldwin: Through the Unusual Door February 7-May 10, 2020. This exhibition of 50+ paintings, works on paper, and unpublished archival material examines the 38-year relationship between painter Beauford Delaney (Knoxville 1901-1979 Paris) and writer James Baldwin (New York 1924-1987 Saint-Paul-de-Vence, France) and the ways their ongoing intellectual exchange shaped one another’s creative output and worldview.

Through the Unusual Door seeks to identify and disentangle the skein of influences that grew over and around a rich, complex lifetime relationship with a selection of Delaney’s works that reflects the powerful presence of Baldwin in Delaney’s life. The exhibition draws from the KMA’s extensive Delaney holdings, public and private collections around the country, and rarely displayed papers held by the Delaney estate. KMA curator Stephen Wicks is organizing the exhibition, which is accompanied by a color-illustrated catalogue published by the University of Tennessee Press.

The KMA is proud to hold the world’s largest public collection of work by Knoxville native Beauford Delaney, who overcame poverty, racial discrimination, and mental illness to achieve international renown. The young Delaney’s precocious talent was recognized by Lloyd Branson, Knoxville’s first full-time professional artist, who mentored Beauford and his brother Joseph. By 1929, Beauford Delaney had settled in New York where he attracted a distinguished circle of cultural luminaries that included Georgia O’Keeffe and Henry Miller, but it was the much younger James Baldwin who had the most significant influence on the artist. Baldwin found in Delaney a father figure, muse, and model of perseverance as a gay man of color. Delaney found in Baldwin a powerful intellectual and spiritual anchor who inspired some of his finest works. Encouraged by Baldwin, Delaney left New York in 1953 and settled in Paris, where he lived until his death in 1979 and where artist and writer continued their long and mutually beneficial relationship. Through the Unusual Door presents the story of Baldwin and Delaney in a way that inspires reconsideration of their life circumstances and raises important questions about the nature of the racial and sexual identity barriers they faced.

The exhibition title Through the Unusual Door comes from a passage in Baldwin’s volume of collected essays The Price of the Ticket (1985) describing the author’s reaction to his initial encounter with Delaney in the doorway of the artist’s Greenwich Village studio: “Lord, I was to hear Beauford sing, later, and for many years, open the unusual door… I walked through that door into Beauford’s colors.” This first meeting encapsulates Delaney’s transformational effect on Baldwin’s view of himself and the world he lived in, and set the tone for the painter’s role in the author’s life as a father figure and mentor. Baldwin, in turn, inspired Delaney with his fearless social conscience and commitment to civil rights causes. They helped each other to move beyond the pain and oppression imposed on them by the world.

While no other figure in Beauford Delaney’s extensive social orbit approaches James Baldwin in the extent and duration of influence, none of the major exhibitions of Delaney’s work has explored in any depth the creative exchange between the two. Previous scholarship has almost exclusively emphasized the artist’s stylistic evolution from the 1940s to the 1960s as a function of his move from New York to Paris. Through the Unusual Door posits the idea that this profound stylistic change was in part inspired by the intellectual and personal relationship between Delaney and Baldwin. Ordinary daily observations–reflections in puddles in the streets of Greenwich Village or the quality of light filtered through the window of Delaney’s studio in the Paris suburb of Clamart–sparked extraordinary creative exchanges between the two. The exhibition incorporates previously unpublished archival materials and artworks that promise to extend the understanding of Delaney’s aesthetic agenda and range and reveal the extent of his ties to Baldwin.

Acquiring and showing the work of Knoxville native Beauford Delaney has been a longstanding institutional priority for the Knoxville Museum of Art. In the summer of 2017 the museum organized Gathering Light: Works by Beauford Delaney from the KMA Collection, the first-ever showing of its own holdings. Gathering Light kicked off a multi-year, community-wide initiative to honor the legacy of Beauford and his brother, Joseph, under the rubric of the Delaney Project, a consortium of organizations and individuals dedicated to making the Delaney brothers better known in their hometown. The KMA, the East Tennessee Historical Society, Beck Cultural Exchange Center, Marble City Opera, and the University of Tennessee Humanities Center are just a few of the organizations involved in presenting the Delaney brothers to the local community and to the world. The KMA expects Through the Unusual Door to make a significant contribution to Delaney scholarship, raise the museum’s institutional profile nationally, promote the artist’s legacy in his hometown, and enhance Knoxville’s standing as a center for Beauford Delaney studies.

Beauford Delaney and James Baldwin: Through the Unusual Door is made possible by generous underwriting from the Henry Luce Foundation, the National Endowment for the Arts, and the Art Dealers Association of America Foundation.