Kathleen Henderson: ‘Watch Me Make You Disappear’
Expressing the Dire State of Our World 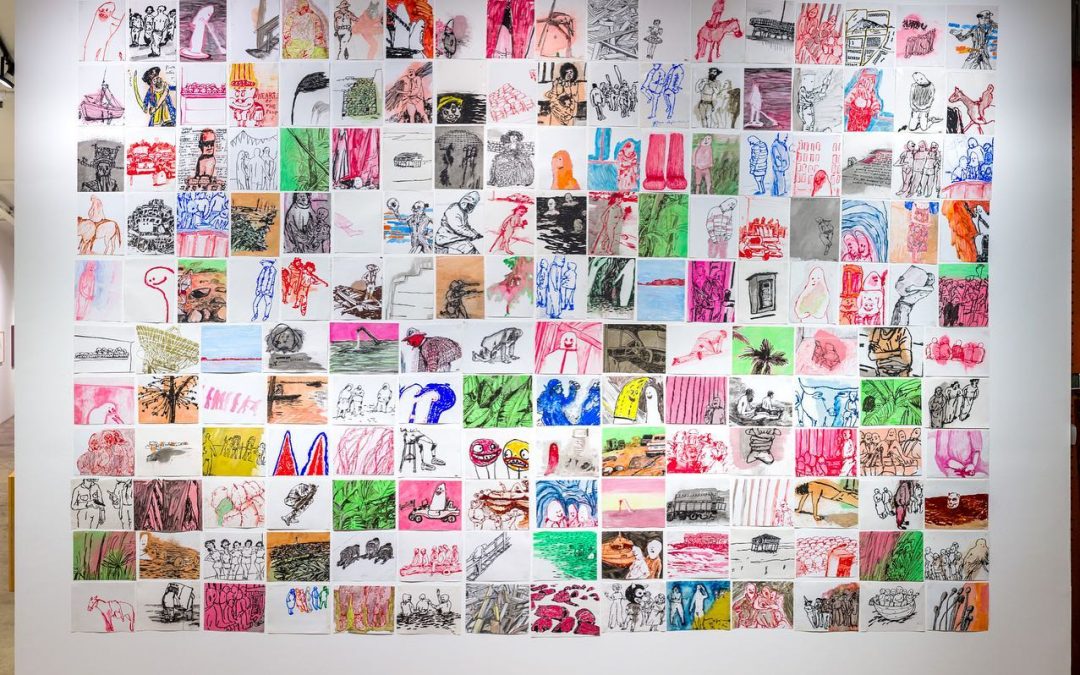 Watch Me Make You Disappear

​Kathleen Henderson has a facile hand and a keen wit. She mines the news media for content and rather than make didactic and preachy work about the state of the world, she offers humorous interpretations of these troubling times. Her oil stick and oil on paper works have a gestural urgency and her thick strokes suggest her characters, rather than render them realistically. In the past, the drawings were black oil-stick outlines on white paper but now her palette has expanded and many of the works have pink and green lines and shading, as well as brushed background tonalities. The latest drawings depict nude and hooded figures, animals, office spaces and political events with and without speakers. There are also images that suggest the unpredictability of nature and the changing climate. Henderson’s deadpan titles make reference to the work’s content yet are often more metaphoric than specific. For example, Mushroom Cloud Party Hat Party (2019) pictures a smiling, multi-breasted Venus of Willendorf-esque figure in mid-jump in front of a stone wall and a distant urban landscape with a green-toned sky. Scrawled on the wall are the words: mushroom/cloud/party/hat./party. The who, what, when and why remain a mystery. This ambiguous figure also makes an appearance in Artemis of Ephesus on Stage (2019), as well as in many of Henderson’s out-takes, smaller (8 1/2 x 11 inch) works presented as a large grid in the back room of the gallery. Within this seductive and engaging presentation are crudely drawn prisoners, the devastation of hurricanes, masked men with guns, crowds, politicians, skeletons and oil rigs. 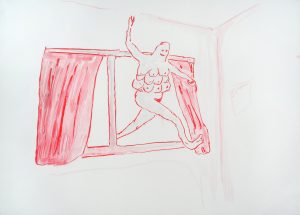 Artemis of Ephesus Comes in the Window

The cumulative effect of viewing these 150-plus works on paper is like mainlining a year of news, taking in the foils, destruction and ruin through a sigh of disbelief. In many ways, Henderson’s out-takes function as the index, opening possibilities for the creation of relationships and finding similarities between the larger and smaller works. Though not studies in the traditional sense, the out-takes represent the expansive nature of Henderson’s undertaking. Henderson’s work speaks directly to the moment. She is not shy about expressing her political beliefs and pointing a finger at the absurdities within the current administration. While there are moments of reflection like in Kiss, where a figure leans over to kiss the ground or Narcissus in which a figure confronts his reflection, the overall effect of the exhibition is an expression of the dire state of our world. Office in an Office Building