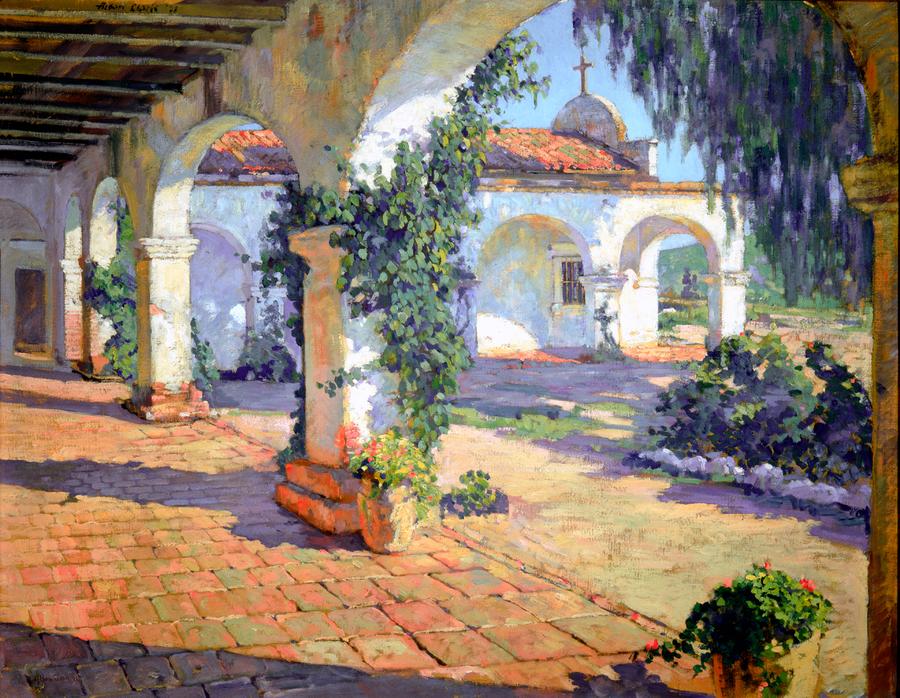 On view through January 11, 2020, “El Camino del Oro” traces early California history through paintings, some on loan from private collections, at the Joan Irvine Smith and Athalie Richardson Irvine Clarke Gallery at the UCI Institute and Museum of California Art.

Although the missions in Baja California are older—the earliest of which was established at Loreto in 1697—the first mission in what is now the state of California was founded in San Diego by Spanish Franciscan friars in 1769. Over the next fifty years, Spanish missionaries established a total of 21 missions throughout California, stretching as far north as Sonoma. They were connected by El Camino Real, also called the Royal Road or the King’s Highway, a route that today’s Highway 101 approximates.

In 1821, Mexico declared its independence from Spain and claimed California as a province. Mexico passed laws restricting the missions and their vast land holdings were confiscated and distributed as land grants, leading to the formation of large ranches. By 1850, when California became the 31st state of the Union, many of the missions had been abandoned and were in ruins. It wasn’t until the 1890s, when artists began portraying the missions as relics of California’s cultural past that a serious effort was made to preserve and restore them.

One of the oldest paintings on display dates from 1886. Painted by Alexander Harmer (1856-1925), it shows the front courtyard of the Mission San Juan Capistrano. What is now one of the most beautiful gardens in California was then a dry, dusty yard, with just a few geraniums against the pillars of the arcade.

Of the several California missions shown in these rare and beautiful paintings, the most popular was Mission San Juan Capistrano, whose beauty and elegance earned it the nickname “The Jewel of the Missions.”