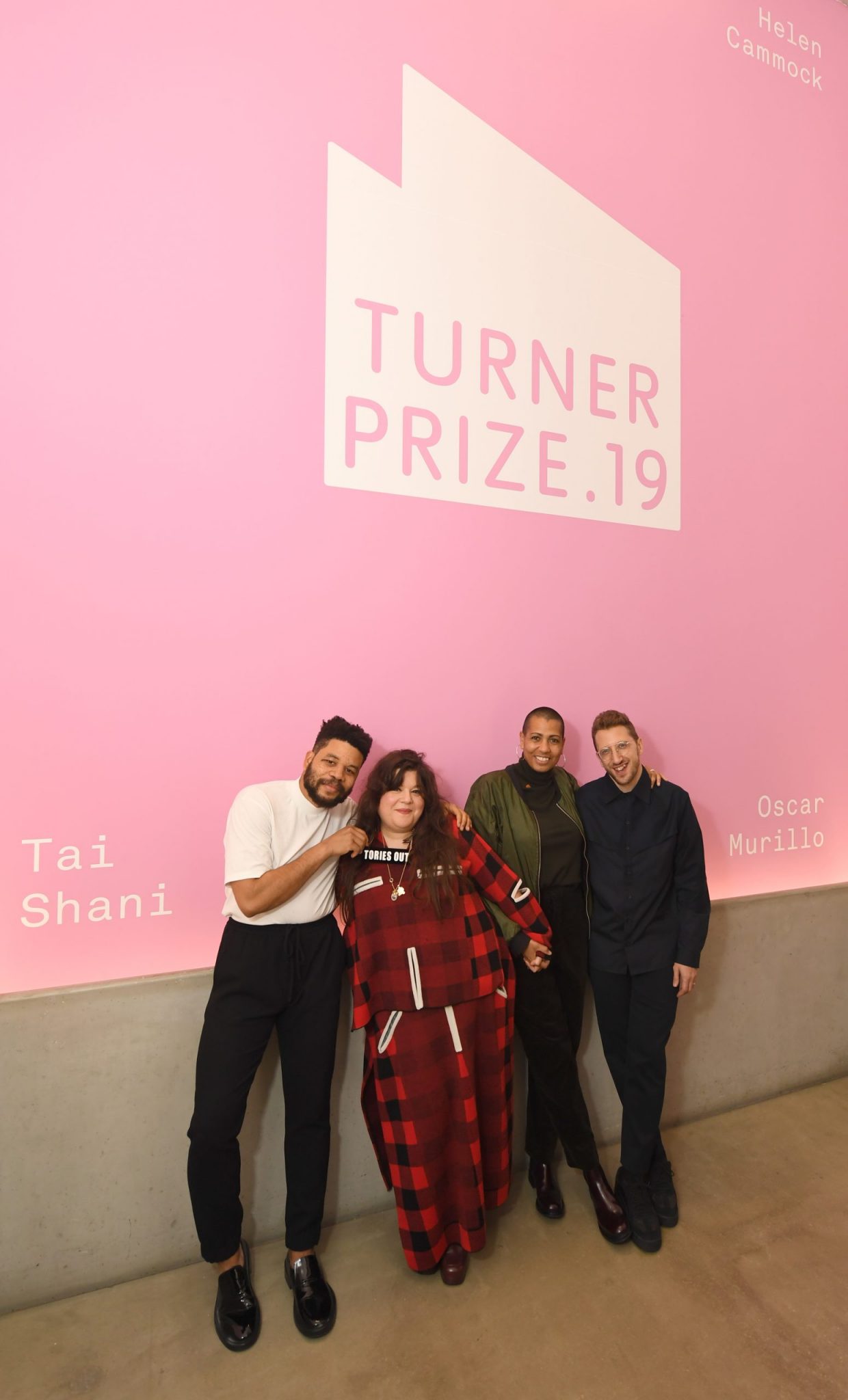 The Turner Prize 2019, presented in partnership with Tate and Turner Contemporary, has been awarded to a collective bringing together the four nominated artists: Abu Hamdan/Cammock/Murillo/Shani. The prize was presented by Edward Enninful, Editor-in-Chief of British Vogue, at a ceremony broadcast live on the BBC from Dreamland in Margate.

The four nominees – Lawrence Abu Hamdan, Helen Cammock, Oscar Murillo, and Tai Shani – came together to request that the jury consider awarding the Prize to them as a collective. In recognition of these artists’ shared commitment to urgent social and political causes, the jury unanimously decided to honour that request.

In a joint letter to the jury, the artists said: ‘At this time of political crisis in Britain and much of the world, when there is already so much that divides and isolates people and communities, we feel strongly motivated to use the occasion of the Prize to make a collective statement in the name of commonality, multiplicity and solidarity – in art as in society.’

The jury praised the artists for their commitment to the collective power of art. They noted that this unique and timely act of solidarity encapsulates the very reasons for which these four artists were nominated in the first place, as demonstrated in the works they exhibited at Turner Contemporary.

The jury said:“At our meeting today, we were presented with the letter from the artists and unanimously took the decision to agree to their request. We are honoured to be supporting this bold statement of solidarity and collaboration in these divided times. Their symbolic act reflects the political and social poetics that we admire and value in their work.”

Alex Farquharson, Director of Tate Britain and chair of the Turner Prize jury, said: “In coming together and presenting themselves as a group, this year’s nominated artists certainly gave the jury a lot to think about. But it is very much in the spirit of these artists’ work to challenge convention, to resist polarised world views, and to champion other voices. The jury all felt that this made the collective a worthy winner of the Turner Prize.”

One of the best-known prizes for the visual arts in the world, the Turner Prize aims to promote public debate around new developments in contemporary British art. Established in 1984, the prize is named after JMW Turner (1775-1851) and is awarded to an artist born or based in the UK for an outstanding exhibition or other presentation of their work in the past twelve months.

The 2019 edition of Turner Prize is the first time that the venue for the exhibition, outside of London, has had a direct connection with JMW Turner. Turner Contemporary stands on the site of the artist’s lodging house and enjoys views of the skies that Turner felt were ‘the loveliest in all Europe’.

The members of the Turner Prize 2019 jury are Alessio Antoniolli, Director, Gasworks & Triangle Network; Elvira Dyangani Ose, Director of The Showroom Gallery and Lecturer in Visual Cultures at Goldsmiths; Victoria Pomery, Director, Turner Contemporary, Margate and Charlie Porter, writer. The jury is chaired by Alex Farquharson, Director of Tate Britain. Next year the prize will return to Tate Britain.