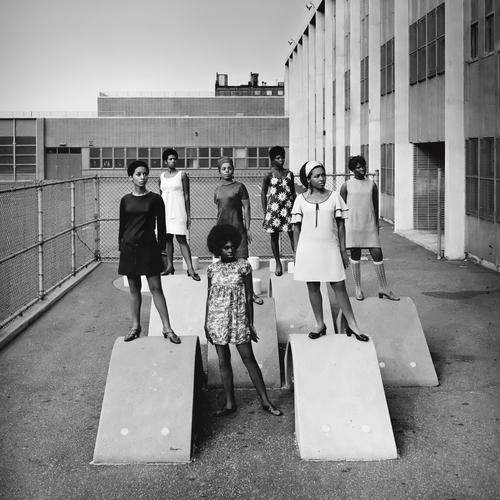 Photo shoot at a public school for one of the AJASS-associated modeling groups that emulated the Grandassa Models and began to embrace natural hairstyles, by Kwame Brathwaite, in "Black is Beautiful: The Photography of Kwame Brathwaite," at MoAD.

The Museum of the African Diaspora (MoAD) announced the appointment of Monetta White as Executive Director. White, who has been serving as Interim Director since August 2019, will begin in her new role immediately.

White, a native San Franciscan who has served as Managing Partner of the Fillmore Food Group since 2004, has been involved with MoAD since its inception. An avid patron and donor, she co-chaired the Museum’s annual Afropolitan Ball in both 2017 and 2018 and was instrumental in helping the Museum raise more than $1 million at these events for the first time. White joined the MoAD Board of Directors in May 2019 and, soon after, was asked to serve as Interim Director in the final months of the Museum’s national Executive Director search, led by Koya Partners.

In just a few short months as Interim Director, White made impressive strides on behalf of the institution toward stabilization of essential mission-driven programs and financial sustainability. Working closely with the curatorial team, White has helped to establish a new studio residency program in partnership with San Francisco Art Institute, expanding MoAD’s signature Emerging Artist Program. Together with the education team, White helped to secure MOUs to become official partners of the San Francisco and Oakland Unified School Districts. With a new, first-ever collaborative exhibition to open this week entitled Don’t Shoot: An Opus of the Opulence of Blackness, White has helped forge an exciting new partnership with the African American Arts and Cultural Complex (AAACC). Within the first few months as Interim Director, in collaboration with the development team, White helped to bring in important multi-year gifts and led the Museum in raising over $1.5 million at the 2019 Afropolitan Ball.

“The Board of Directors and staff of MoAD are absolutely thrilled to have Monetta White officially join the organization,” says MoAD Board Chair Wade Rose. “A leader in the community and a supporter of MoAD from our beginning, Monetta will guide the Museum into significantly more expansive community engagement. We could not be more pleased.”

“My passion is to sustain African American culture and the arts, motivating people to understand the critical need for it in our environment and for the future of our society,” says White. “MoAD is that rare place where the stories of the African Diaspora can be sustained, preserved, learned, and created anew. I want to ensure that MoAD thrives here in the Bay Area for the long term.”

White has strong ties to the city both personally and professionally. In 2007, when she and husband Chef David Lawrence opened 1300 on Fillmore, the duo were excited by the opportunity to help revive the neighborhood she grew up in through good food and music. White’s business savvy and passion for food and community continued with her opening 1300 on Fillmore at SFO International Airport. As Managing Partner of Fillmore Food Group, White oversaw their restaurants, supervised the daily operations of a staff of over 100 employees, produced hundreds of events, and managed fundraising and investor relations. White is also the founder of Westside Cultural Connections, an event services company she established in 2012.

White has been recognized for her knowledge and leadership by the City of San Francisco, for which she served as Vice President of the Small Business Commission. She sits on the board of directors for several non-profit and business organizations including SF Travel, and holds positions on the Advisory Boards of Wells Fargo, Sterling Bank, and Alive & Free, a violence prevention program founded at the Omega Boys Club. Her community leadership also includes positions as founder and president of the Lower Fillmore Merchant Association and training for youth in hospitality with the Partnership Success Center and Mo Magic.