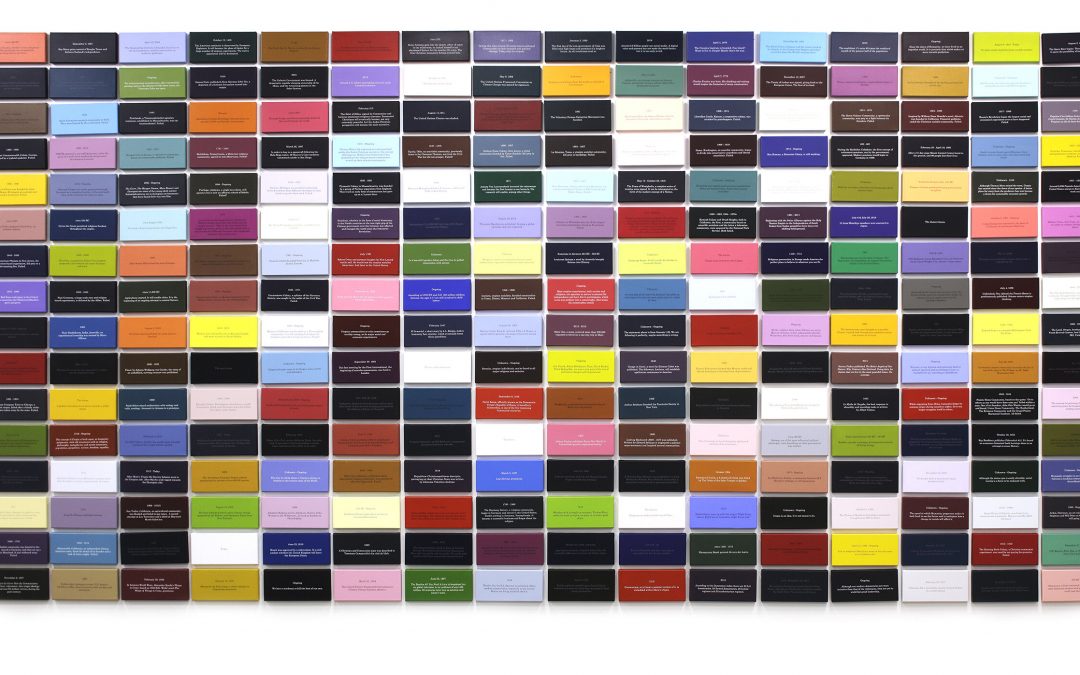 Facts, contradictions, puzzles, an explanation and a few lies

In Facts, contradictions, puzzles, an explanation and a few lies, Guadalajara-based, mixed media artist Octavio Abúndez presents large brightly colored canvases covered with snippets of text culled from disparate sources. The centerpiece, Hi(stories): A Utopian History of Humanity (2019), a grid of 256 small canvases, is both an homage to Gerhard Richter‘s Color Charts and On Kawara’s Date Paintings while also a jumping off point for something completely different. Though Richter’s color choices were based on industrially produced paint chips (coincidently the number 256 is also the number of web-safe colors formed through the combination of red, green and blue hex values), Abúndez’s colored surfaces most importantly serve as backgrounds for white or gray texts about utopias. 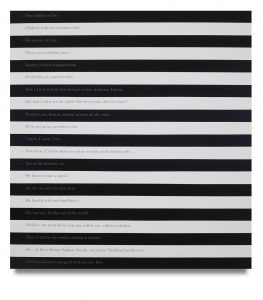 It would be time consuming (but not impossible) to read through the entire work. Scanning the different texts sheds light on concepts of utopia throughout history that Abúndez has carefully organized and represented. Some of the descriptions are dated, others are headed “ongoing” or “unknown.” Examples include: circa 360 BC: Plato describes Atlantis, whether it was allegorical or gossip, this paved the way to search for something that is not there; Ongoing: Since the dawn of Humanity, we have lived in an imperfect world. It is precisely that which makes us move towards perfection; Unknown: Language began. It will enable knowledge to overcome Death; The future: Utopia must invent its own Utopia. Through the presentation of contrasting and conflicting statements arranged in a structured grid, Abúndez’s work illustrates ever-changing, expansive and amorphous utopian ideals. 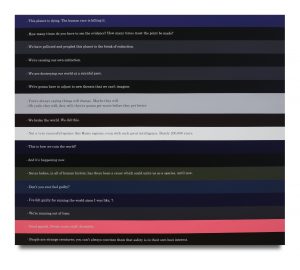 Shown in conjunction with Hi(stories) are paintings from Abúndez’s series, We Could be So Much Better. This consists of large striped works covered with snippets of dialogue from a list Abúndez created featuring 198 dystopian films. Each utterance is presented in a basic serif font, centered within a horizontal band of vibrant color. As the viewer reads though the quotes, a conversation is constructed. While the title of each painting lists the names of the characters from the films, it is only through accompanying cheat sheets that Abúndez’s full source materials and references are revealed. 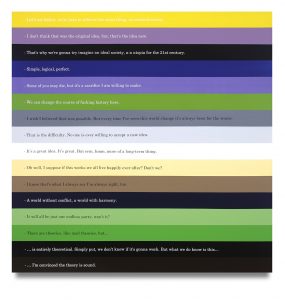 In Neo/Coffee Shop Manager/George/Owen Grady/Julius Lowenthal/The White Widow/Quentin/Worth/Quentin/Worth/Pinbacker/Tic’Tic/Fifi/ John Connor/Kuato/Joseph Lynch/Johnny Mnemonic, a painting on the theme of ‘prophecy,’ the dialogue begins, “The prophecy was a lie. / I am not a hero. / What are you gonna do? It’s a lousy world. / You should write fortune cookies…” And ends, “People don’t believe in heroes anymore. / I feel the weight of the future bearing down on me. A future I don’t want. / You are what you do. A man is defined by his action, not his memory. / A man grows with the greatness of his task. / Now suddenly, I’m responsible for the entire fucking world.” In each of the nine pieces, the viewer comes away with a muddled understanding of what the characters are referencing. Yet, when filtered through Abúndez’s ingenious sequencing, there is an ironic sense of hope, despite the hopelessness. While not every viewer will be able to recognize all the characters and quotes within the paintings, there are references to James Bond, Keanu Reeves’ characters and the Avengers. 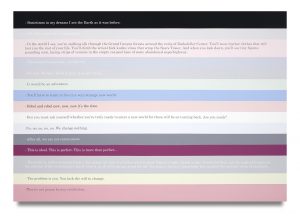 It is curious that Abúndez, whose native language is Spanish, presents his work in English. This feeds the notion that they are translations and interpretations. In my mind, Abúndez’s pieces share an affinity with the work of Christian Marclay, who also composites fragments from films. Both Abúndez and Marclay sequence unrelated elements drawn from Hollywood movies, creating new meanings through juxtaposition. 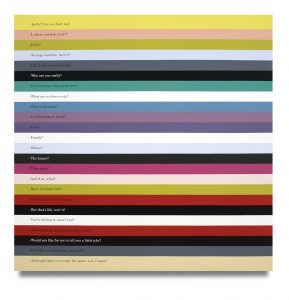 The pieces in Abúndez’s We Could be So Much Better series are playfully engaging, whereas the works on view in the backroom from a series entitled Chronic Complicatedness reflect more adroitly dystopic world views. These floor and wall-based sculptures have the look and feel of enlarged wads of crumpled paper. Each work is covered with a melange of overlapping texts extracted from science fiction novels. A bronze figure strategically placed alongside each piece and tiny in comparison, appears to wrestle with or hold the paper at bay. The weight of the words towers over these little men. 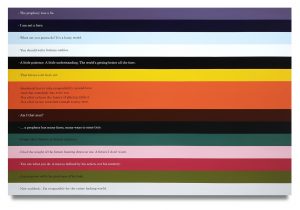 At first glance, Abúndez’s work feels familiar and obvious, yet upon closer examination, these pieces are a smart and engaging interpretation and re-presentation of pop culture. Abúndez draws from literature and history, as well as cinema. He is interested in the visual power of language and the way words communicate and inspire what pictures can’t. 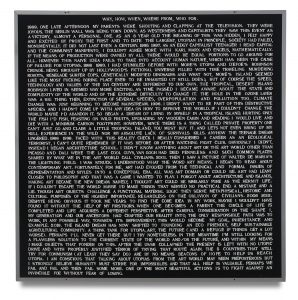