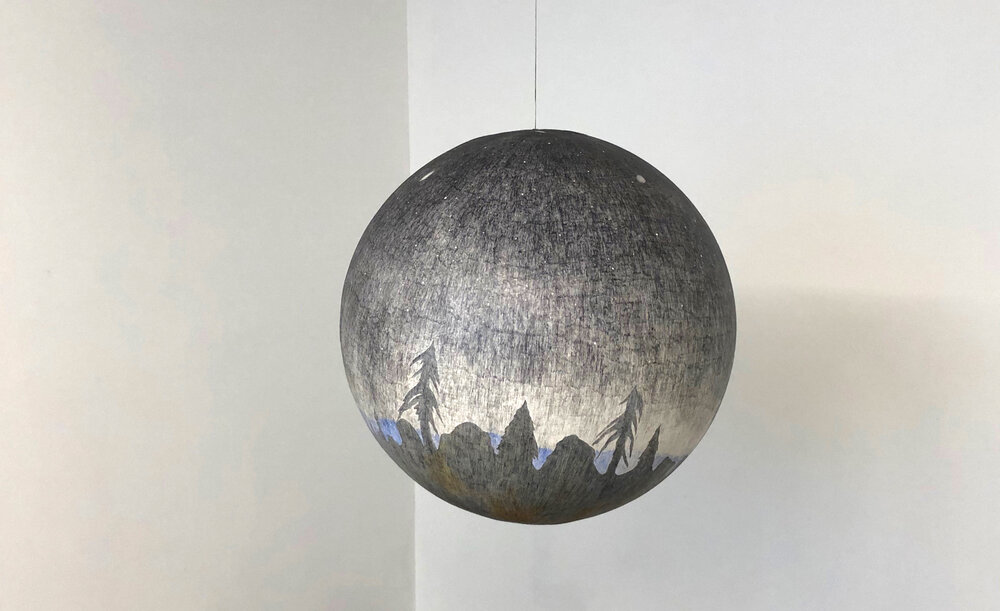 Russell Crotty is an astute observer. He has spent endless hours drawing surfers and surf spots along the California coast, as well as looking up into the night sky and transcribing what he sees onto custom globes. He often works with a ball-point pen, filling large expanses of paper with doodle-like sketches that perfectly capture the tempo of the waves and aura of the atmosphere. 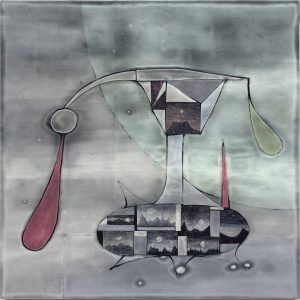 His latest pieces are a departure from his well-known method of working— an amalgamation of drawing, paint, sculpture and collage— yet not surprisingly, a continuation and expansion. Here, Crotty combines bio-resin, recycled plastic containers and depictions of the astrological as well as man-made environments. 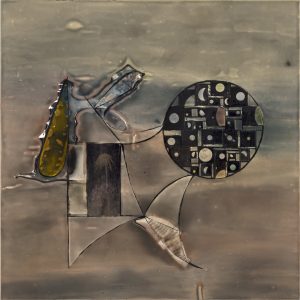 These new pieces are both celestial and terrestrial. Many feature quasi-space-ships that float in an ambiguous environment, a strange combination of land, sea and sky. Crotty’s square paintings have a 1950s sensibility and palette. His lines, created with a stick dipped in ink, have a childlike simplicity that brings to mind the works of Paul Klee and Joan Miro. 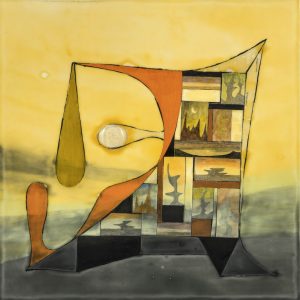 With titles like Extra Solar Locator, Our Galactic Environs or The Data Server Conundrum, it is evident that Crotty is interested in how the technological, both real and imagined, has infected and affected the landscape. In each work, Crotty collages bits of three-dimensional clear plastic, drawn fragments and lines to describe architectural objects that hover between the compositions’ planes and receding space. 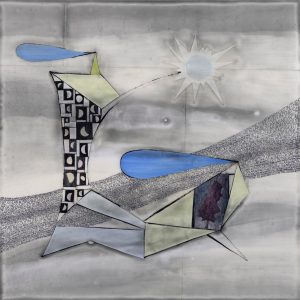 In Carbon Star (all works 2019), a structure comprised of irregular circles, rectangles and triangles drifts by a large dark planet that occupies the lower third of the picture. Another smaller sphere in the upper righthand corner— the carbon star — is presented as a bright red disk with a glowing aura. The work is at once whimsical, magical and haunting. 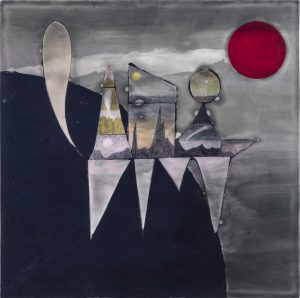 Two amorphous, amoeba-like shapes occupy the foreground in Extra Solar Locator. One, a vessel or spaceship, contains a montage of smaller drawings— trees, mountains and planets— perhaps to help identify its quest as it approaches the other, an alien-tree-like form. In the background at what seems the edge of this world is a tall, triangular tower topped with a light blue oval platform. The tower is inscribed with rows of hand-written block-letters that spell out obscure names, coordinates and dates: gibberish to all but those well versed in astronomy. 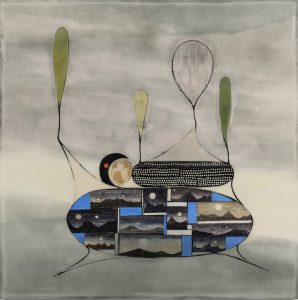 The works are beautiful and enigmatic. Crotty plays with figure ground relationships, creating spaces where incongruous structures can co-exist. The places are distant, yet familiar, both utopic and dystopic. He depicts an abstracted future filled with technological innovation, yet created by hand with an ad hoc temperament. In these strangely figureless landscapes he calls attention to worlds as well as times beyond the present where human beings seem to have disappeared.