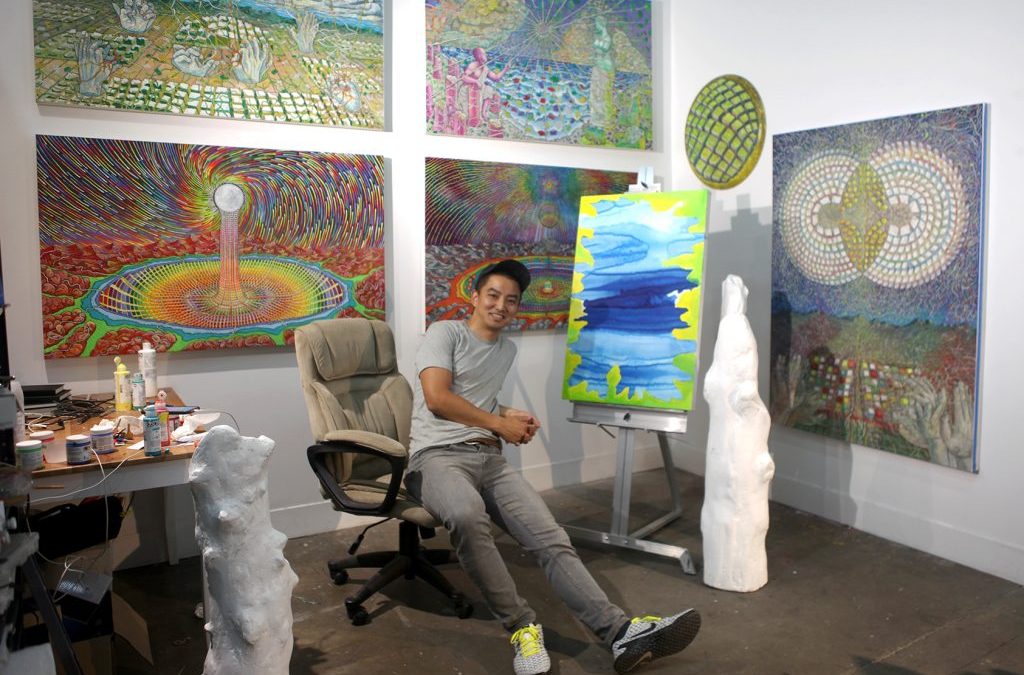 The Japanese-born, L.A.-based multi-media artist whose world vision is simultaneously bleak and colorful, dystopian and hopeful and who, while also remaining open to humanity’s follies, has exhibited in Asia, Canada, Ireland, Belgium, Italy and across the States – with his influences including science fiction, medieval paintings, Buddhist philosophy and beyond – plumbs his own psychological depths only to discover what makes him love work and life.

What historical art figure would you like to have lunch with and why? I’d like to meet Ansel Adams and also John Muir. I want to thank them for what they have done – their  conservation activities and their inspirational commitment to protect the wilderness in the Sierras and elsewhere. I want to ask them what’s their favorite landscapes. I also named my son Ansel. He’s five and I took him to the Sierras two or three times already and he loved it. 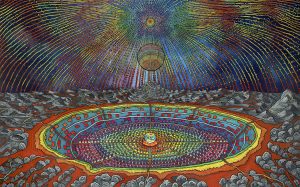 A Window to the Universe

What did you purchase with the proceeds from your first sale? I think I paid my rent. My first sale was in 2001 and I was 21 and that was the first year I moved to the U.S. from Tokyo. I had a group show in Chelsea in New York and sold a painting for 600 bucks. It was good. It was a juried show and they didn’t take any percentage, but I didn’t even have a bank account at that time and I didn’t know how to cash the check. I didn’t know how things worked financially in the U.S. and it took a couple days to figure it out, because checks were not something the Japanese use. Maybe bankers might use them, but I [had] never seen them. 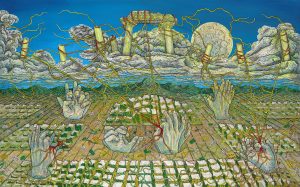 When and where were you happiest? I’m happiest with my family and especially in nature. Yosemite Valley – that’s something I’ve never seen before or experienced before and I remember the cliffs and mountains and smells of trees and waterfalls. The whole thing was beautiful – Yosemite or the Sierra mountain range.

What is your most treasured possession? Artworks that I trade with my artist friends. They are special. I don’t really buy art because I don’t want to spend money, so I trade paintings with my friends. 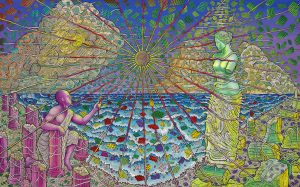 Venus in the Ruins

Where is your ideal escape destination? It used to be New York was exciting to me. I lived in New York for seven years and being there made me high.I was happy. I’ve lived in L.A. since 2013 and I like to go to the mountains and woods.

What’s the worst survival job you’ve ever had? It wasn’t really a survival job because I was living with my parents [but] I was a newspaper delivery boy in the last year of middle school when I was 14 or 15. I did it to buy a guitar and my parents said, ‘No, you have to find your own money.’ No one else would give me a job, so I took it. It was very physical because I was on a heavy bicycle with hundreds of newspapers. it was a horrible job. 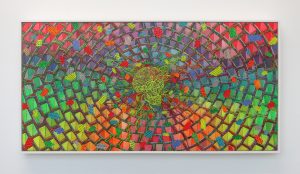 What TV series from your youth best describes your approach to life? It was a Japanese TV program. It was called Global Journal. They picked one person and sent him to different countries and they stayed with a family for a week. It was kind of like Anthony Bourdain. That broadened my view of the world and gave me the sense that there’s all kinds of people in the world. That made me feel like I want to go outside of Japan and experience all that’s there.

If you could change one thing about yourself, what would it be? I [would] like to have a good singing voice because I don’t have it. I played guitar and sang, but I wasn’t very good at it.

What is your most treasured memory? Seeing my kids being born. That was very special. I cried. 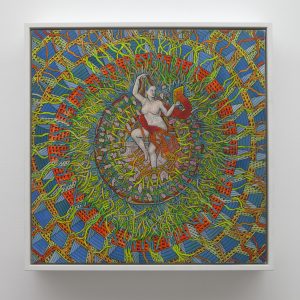 What makes you smile? My family – my kids – they’re just amazing. One is two and the other is five. I can’t help smiling at them. I love cooking for them because I’m the chef in the family, too. And that makes them smile. I cook Japanese, sushi, barbeque, all kinds of stuff – and their favorite is gyoza, Japanese dumplings.

What makes you cry? Thinking about my family in Japan. I have parents and they’re aging. It makes me cry because I cannot be with them often. I try to get back once a year but I want to see them more often. I have two sisters and one brother who are there, too. I miss them all.

What is your go-to drink when you toast to a sale? I like a glass of nice red wine from Napa. I like sake, but a glass of wine is better for me. 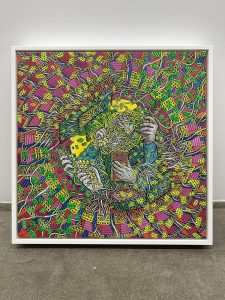 After an all-nighter, what’s your breakfast of champions? This is something I can’t eat here. It’s my mother’s breakfast – miso soup, white rice and roasted mackerel and fermented soy beans – natto. I can make it here, but I’m too lazy to. And soy sauce over tofu, seaweed from Okinawa – mozuku. It looks like algae and it’s marinated with vinegar. This meal would start my day very, very strong.

Who inspires you? My kids and my wife, Rachael Pease [who] is an artist, too. I grew up in Japan but she grew up in Indiana on a farm – riding horses, raising pigs, chickens and cows. I grew up completely different.

What’s your best quality? Patience, because I grew up doing Zen meditation. My dad is a Zen monk. He became a Zen monk after he retired from his job and he wanted to be a monk since he was 13. His mom said, ‘Oh, you have to have a family and have a normal life.’ He kept his word for her. She passed away and he retired from his job and said, ‘I’m going to become a monk.’ Growing up he always took me to a Zen temple and I did that for 10 years, so patience is something with me. 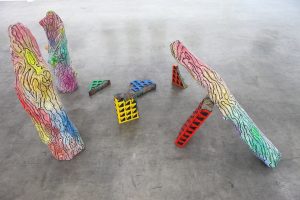 What’s your biggest flaw? Forgetfulness. I forget things all the time, but my iPhone reminds me. I had two alarms set for this interview.

What is your current state of mind? I’m looking forward to going camping. I haven’t planned it yet, but the mountains are calling.

What do you consider your greatest achievement? Having two kids. They are the best art works I ever made. 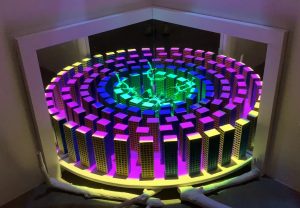 If you were to die and come back as a person or thing, what would it be? I would like to be myself again but with a better singing voice and maybe be a singer. 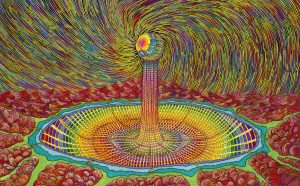 Tadashi Moriyama’s and Rachael Pease’s exhibition, Frontiers, is at Jason Vass through December 7, 2019

Victoria Looseleaf is an award-winning arts journalist who has been a regular contributor to the Los Angeles Times, the New York Times, KCET Artbound and other outlets. In addition, she covers arts festivals around the world, filing datelines from cultural hot spots that include Berlin and Abu Dhabi. Her feminist novella in verse, “Isn’t It Rich?” is being adapted for the stage and her new book, “Russ & Iggy’s Art Alphabet,” is available at Amazon.