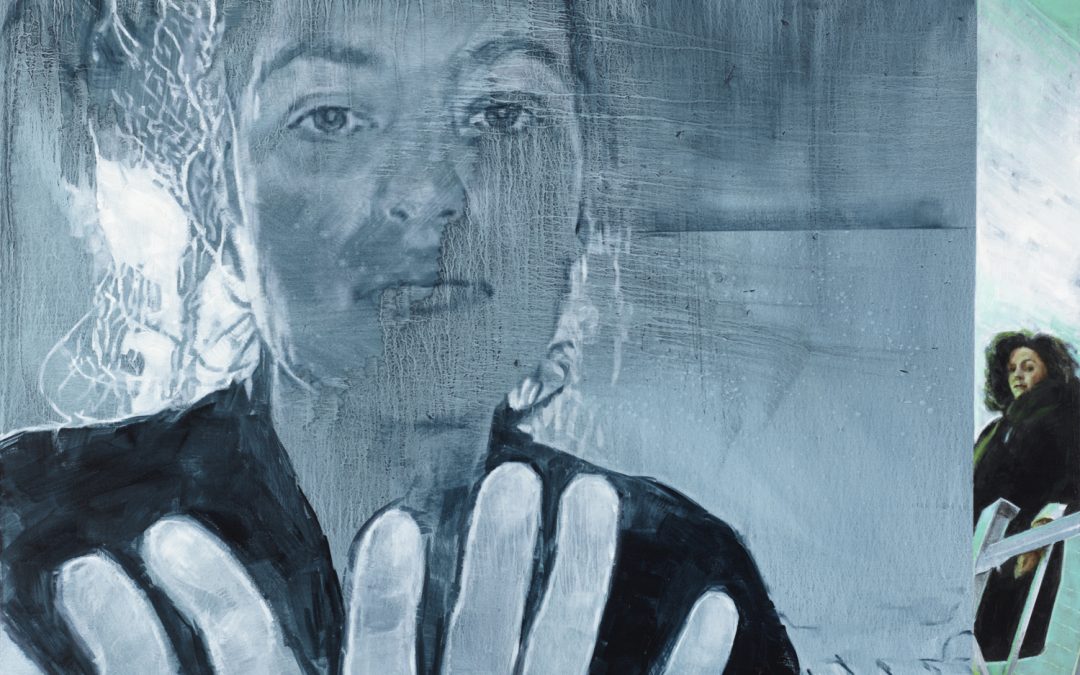 In Ratio: Poems, Laura Karetzky creates paintings within paintings. These intimate and personal works construct narratives that bring people together while also suggesting gaps in time. Karetzky layers pictorial fragments that resemble cell phone selfies and snapshots, juxtaposing large-scale realistically rendered scenes with smaller insets. The pieces are beautifully painted figurative representations that include close-ups of faces, corners and walls of interior spaces, as well as exterior scenes extracted from everyday life, many including groups of people. 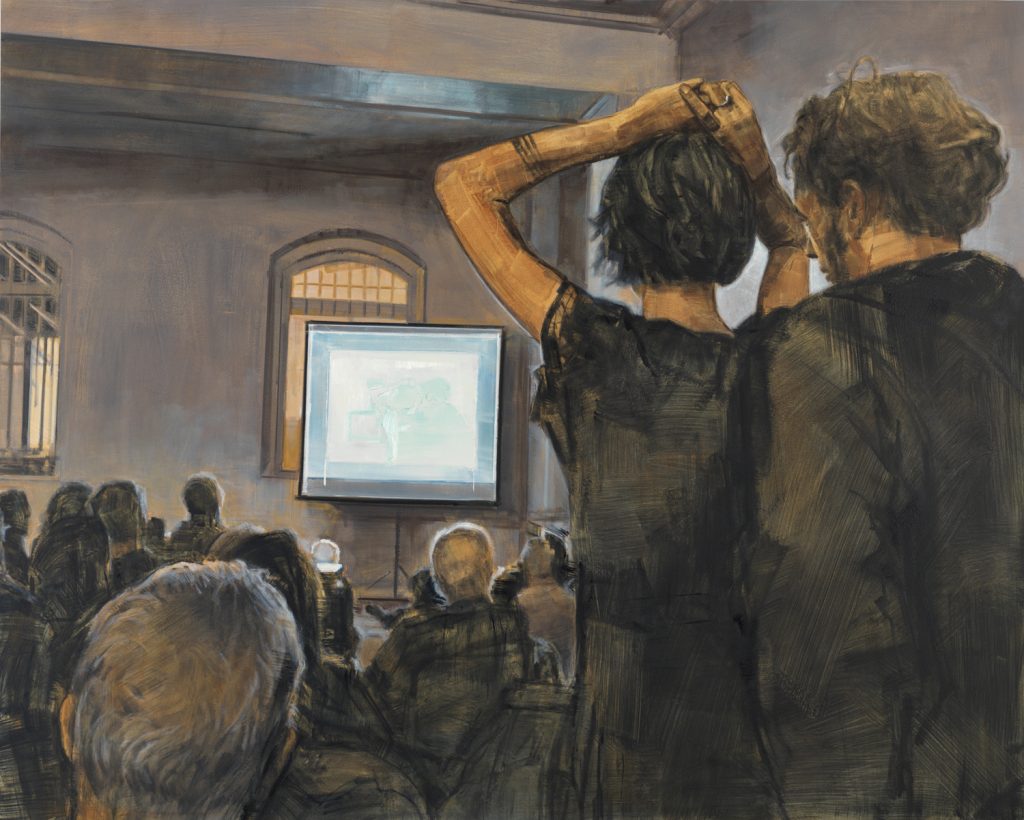 The works take their point of departure from the screen. Karetzky is interested in how people record and document their whereabouts through communications on their computers and mobile devices and how casually framed and cropped compositions have become the norm. What is included, left out and inferred come together in her paintings to create compelling, yet ambiguous narratives. 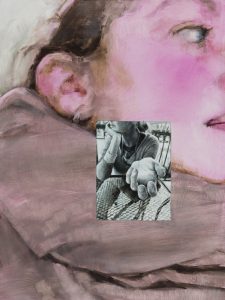 Previous bodies of work have depicted images of people holding cellphones taking pictures, as well as the screen’s interface, yet in these new paintings the phone is implied rather than represented. Embedded Red, 2018, features a woman drinking from a plastic bottle. The monochromatic, red-toned background tightly frames the subject cutting off the top half of her head, focusing instead on the hand that holds the bottle. Set within the painting, just to the left and much smaller than the woman’s hand, is a full-color snapshot-like rendering of a group of well dressed women and in the distance a man standing outside a building, perhaps at a gallery opening. The relationship between the two images suggests a before and after scenario, though it is unclear if one of the women is also the one drinking from the water bottle, as she is aggressively cropped. 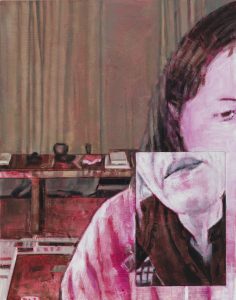 In Embedded Brexit, 2019, an inset featuring a fragment of a woman’s face leaning forward, as if into a computer’s camera, is layered on top of another partial figure. The face that makes up the majority of the background is bisected by the edge of the canvas. Both images are painted in soft tones of reds, pinks and browns with sketchy brush strokes. As a user of SKYPE and other computer-based communication apps, the image is reminiscent of one of those awkward conversations where, although you see the person you’re speaking with, they are blurred or not in full view. 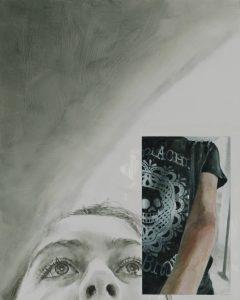 The primary figure in Embedded Yellow, 2019, is painted in a yellow hue. Karetzky depicts this young woman in three-quarter view, sitting at a desk or table. She pensively gazes down towards her lap, though it is not included in the image. Perhaps it is a phone or a keyboard. The smaller inset, crafted with a more realistic palette, shows two women, one seated on a bed in the distance, the other just a sliver at the edge of the frame. The yellow tonality creates a somber mood that is contrasted by the aura of joy suggested in the more fully rendered picture, and the implied narrative suggests separation, or someone being left out. 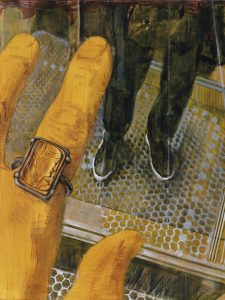 While most of the paintings in the Embedded series portray interior spaces filled with fragmented figures, Karetzky also records the world around her. Presenting Jane depicts people attending a class or a lecture and Embedded Cameo Tiger Eye focuses on a ring on the forefinger of a hand, one pointing towards disembodied legs likely captured on a bus or subway. The cameo ring echoes the inset frames in Karetzky’s other paintings. 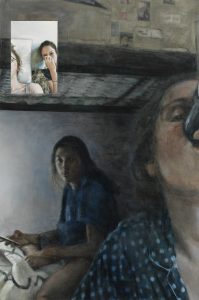 Embedded Barnes is a painting of a boy behind a coat-check counter, presumably at the Barnes Collection. This painting shares a compositional kinship with Edward Hopper‘s Nighthawks (1942) as a large rectangle cuts across the composition implying a scene within a scene. Embedded Barnes feels both familiar and mysterious simultaneously. 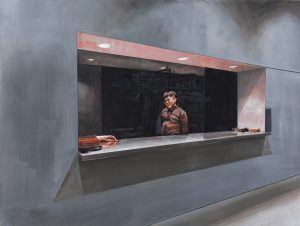 The paintings are frames and windows that function as portraits as well as portals. They are about connectivity and longing to stay or to be connected. Karetzky talks about the works as poems and as ratios. She states, “I have been calling them Ratios. I like the reference to analogy, symbol, mathematical systems, the couple. 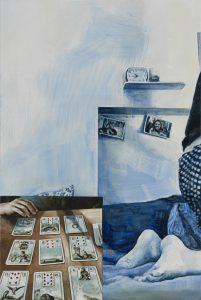 “But are they also poems, and I like the reference to metaphor, written word, intentional editing.” Through the process of painting these complex images, she considers questions like, “Who am I, and can I see myself in others? Is identity defining, or is it multidimensional?” Within these intimate and personal works, Karetzky creates a visual diary that alludes to the inevitable passage of time and the contemporary need to record and share every moment before it fades away.