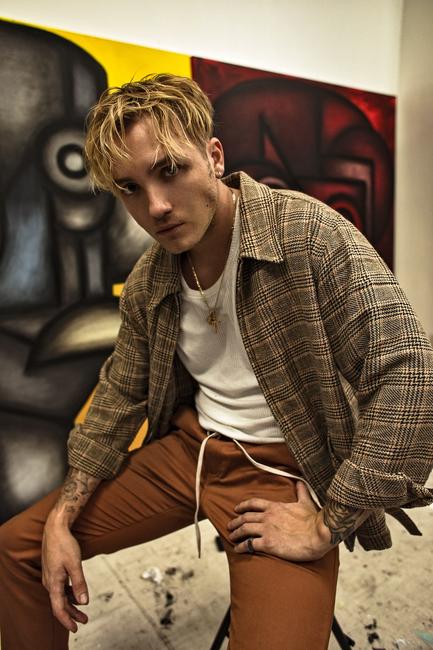 Having first made a name for himself in fashion design DeJardin turned to painting full-time in 2018. Guardians marks DeJardin’s first major solo show.

In Guardians a series of drawn and painted figures will populate the walls of the iconic Taschen building at 870 Beverly Boulevard. Many of DeJardin’s mysterious portraits are large and imposing and seem part-human, part-animal, part-deity. They are painted in stony greys, blacks and blues, broken up now and then by a show of deep red, mustard yellow or majestic purple. Each figure is formed of asymmetrical clusters of heavily outlined geometric shapes: a half-moon for a mouth, an elongated triangle for a nose, off-kilter and imbalanced circles for eyes. Each takes on a character of their own, with their own idiosyncrasies and expressions. In spirit they echo the eccentricity of a cubist portrait, the spontaneity of a graffiti doodle and the solemnity of a mythological God.

DeJardin is a self-taught artist. Having never had a formal art-school education his approach to painting is highly intuitive, a process of, what he calls, ‘trial and error’. This organic approach to painting is steeped in humanity and emotional vulnerability. Using whatever materials come to hand – rags, brushes and old t-shirts – he wipes and smears his portraits into being. The smooth and rounded traces of DeJardin’s strokes charge his Guardians with dignified stillness, a feeling of quiet, monumental and timeless power.

DeJardin sees his God-like Guardians as subconsciously informed by his studies of world religions. He sees them as spiritual custodians, religious icons belonging to no religion in particular but offering universal hope, stability, comforting companionship and even protection in times of personal and collective turmoil.

DeJardin will have an upcoming solo exhibition with Lazinc in London in early 2020.

Coates & Scarry was established in 2012 in the UK and has curated solo and group exhibitions in Hong Kong, Basel, New York, LA, Miami and London. They have collaborated and curated exhibitions with the Bristol City Museum and the Royal West of England Academy.