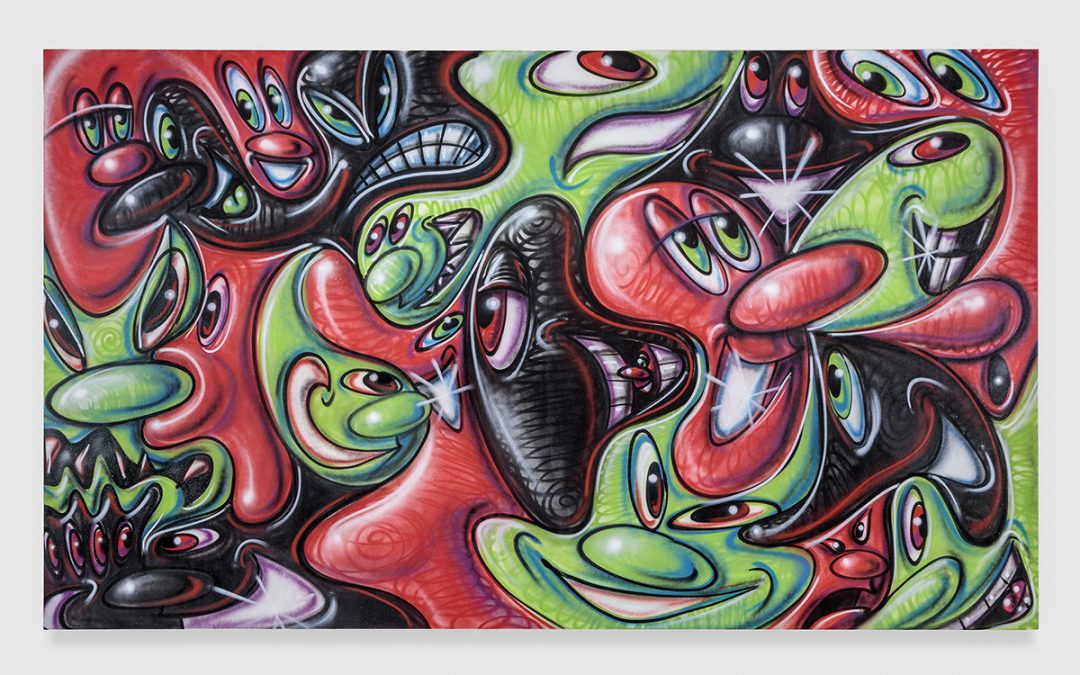 Los Angeles-born artist Kenny Scharf is known for his colorful painting and praised for his street art. Having gotten his BFA from New York’s School of Visual Arts in 1980, Scharf was entrenched in the downtown New York art scene with the likes of Andy Warhol and Keith Haring. His work is most easily recognizable by his “stylized aliens and popular culture icons in tessellated, colorful patterns” (ArtNet) rendered in acrylic and spray paint. 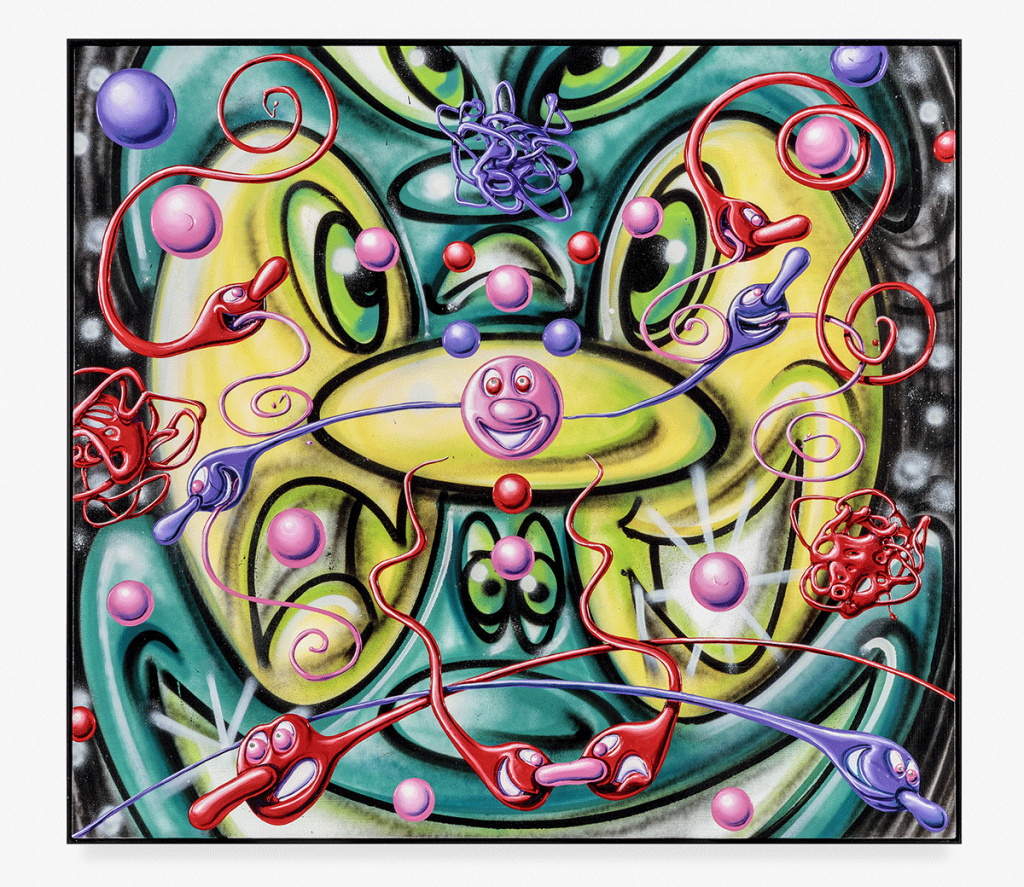 Scharf has written in his bio: “One very important and guiding principle to my work is to reach out beyond the elitist boundaries of fine art and connect to popular culture through my art. My personal ambition has always been to live the example.” Having bought beach property in Bahia, Brazil in 1982, Scharf created one of his Lixos (“trash” in Portuguese) sculptures and would begin utilizing the plastic objects he found there to construct new sculptures. More of an installation, the sculptures are a series of personal and collected plastic toys, assembled in such a way that hang off the roof of the gallery and wrap around its facade. 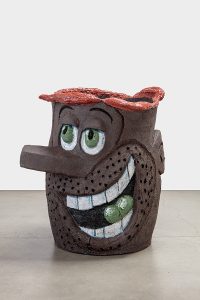 Scharf’s last exhibit at Honor Fraser in 2017 featured his famous oil paintings and mixed media on found television assemblages, with the current show featuring some new artistic endeavors and a seemingly more outspoken ecological awareness. Optimistically Melting! is set up like a home, complete with a spray-painted couch and several sculptures on the walls. 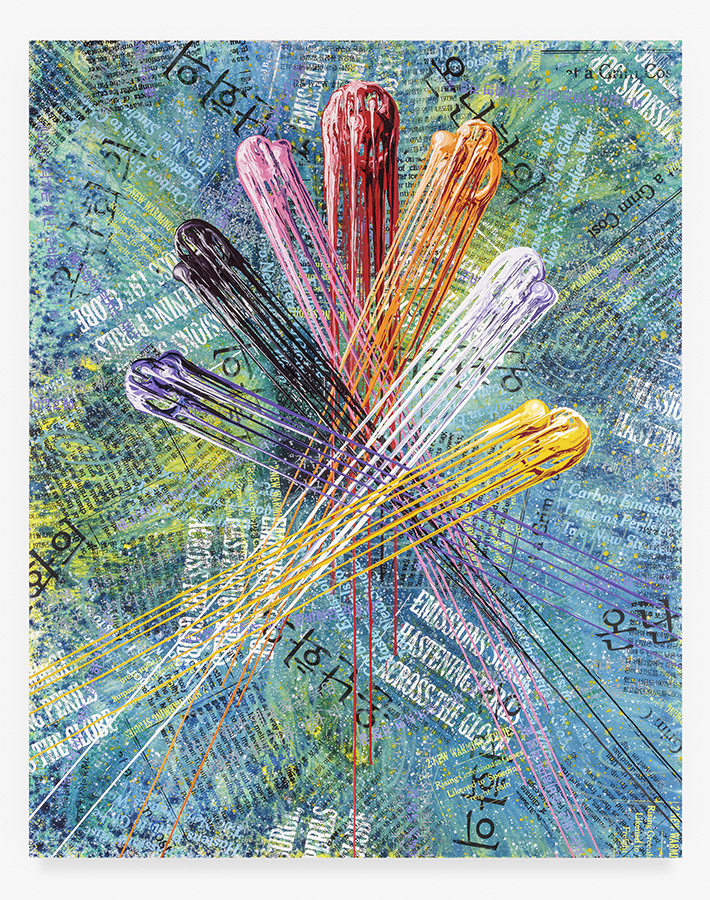 The artist’s brightly colored, amorphous cartoon figures fill the canvases, as do increasingly evocative examples of Scharf’s attitude towards the environment. The gallery has pointed out that, “With clear memories of smog days as a child growing up in Southern California, environmental concerns have appeared throughout Scharf’s oeuvre.” 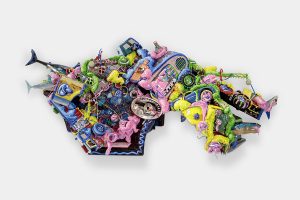 The exhibition also features ceramics that the artist has hand-glazed, such as Earth Flint Stone (2019).These ceramics are sculpted pots with faces that resemble those inside his paintings, and within them are living plants. Scharf, in new ways, has also rendered several still lifes – Viva Nature Morte (2019), and Fleurs et Vase sur la Table (2019), both clearly demonstrating his preoccupation with nature and its sustainability beneath the veneer of joyful color and gleeful cartoon characters. 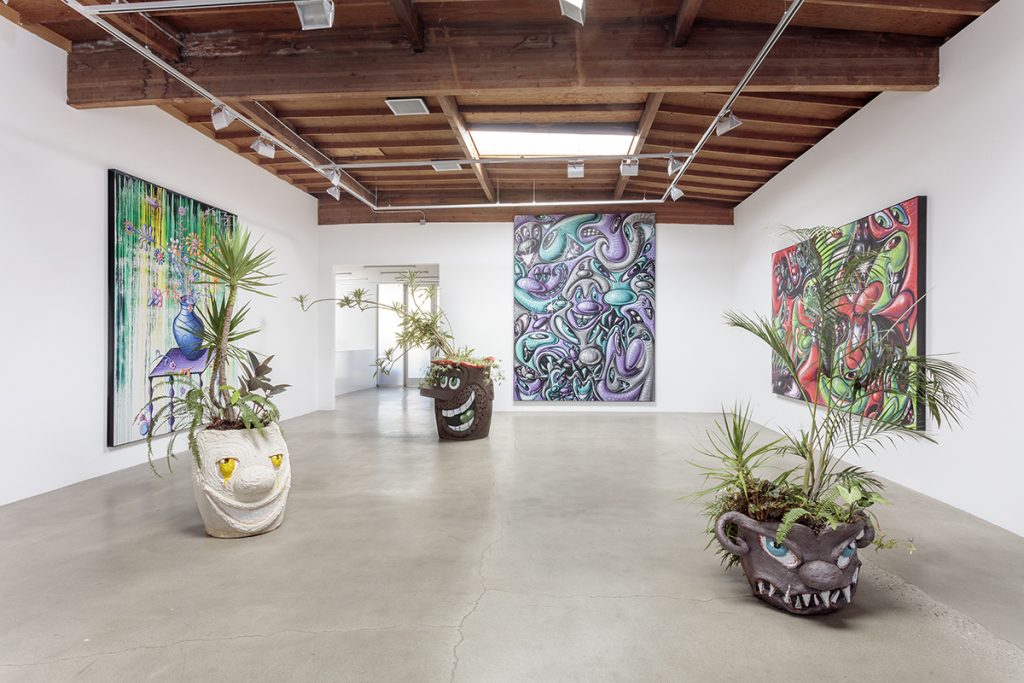 Another room is home to more spray-painted sofas, along with tables, a game of chess, and additional paintings and sculptures. The dominating Optimistical Meltdown (2019) is a large canvas painted with oil, acrylic, silkscreen ink and diamond dust. Situated behind one of the sofas, the work contains screen-printed news headlines in Korean and English and, adorned with dripping orbits of color, are about climate change. 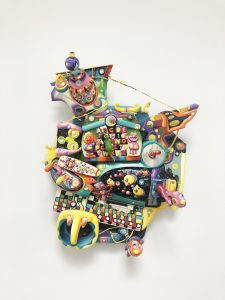 Loneliness abounds in the room where four vandalized chairs are positioned back-to-back and are accompanied by only a few sculptures spaced out on the walls. These sculptures, like 2017’s ABC’s, are “found plastic assemblages.” 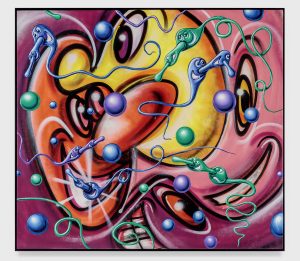 Throughout the exhibit, the mark of a human presence – a young one, at that – is apparent, even though no figures are explicitly rendered in Scharf’s works. The vintage toys crafted into sculptures and his surviving painterly approach offer the faint sense that the galleries have been frozen in time, perhaps from decades ago, when Scharf was operating in the 1980s. 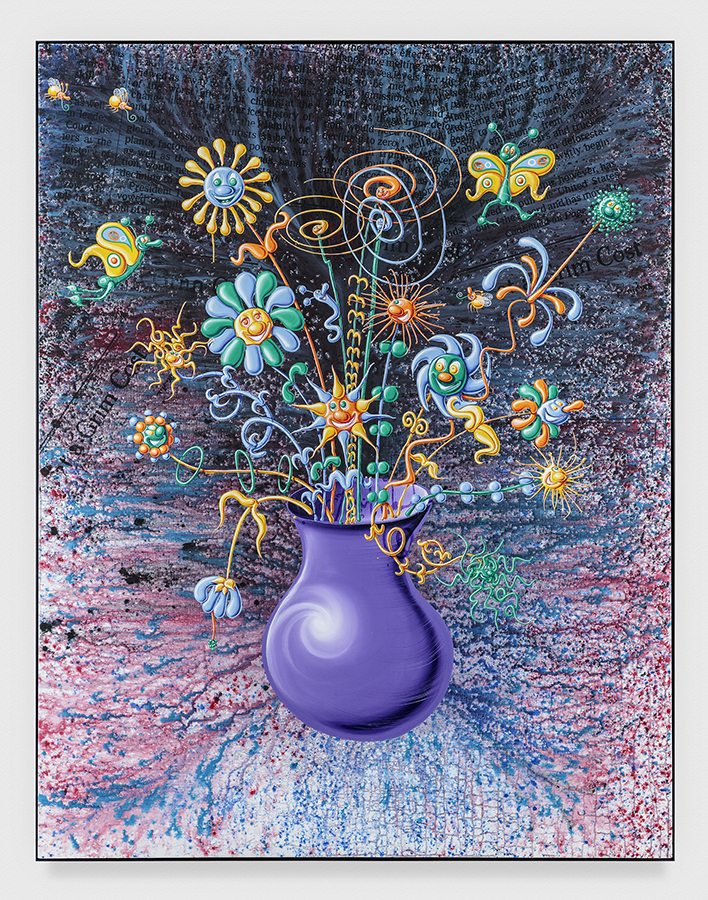 The nostalgia conveyed through these old plastic toys and an atmosphere of domesticity make it clear how personal the project is for Scharf. Through reminiscence, the playful work is personal for him in both a timely and conscientious sense, as evoked by the exhibition’s title. With an appreciation for the past and the present, Scharf, nevertheless, creates work laced with concerns for the future. 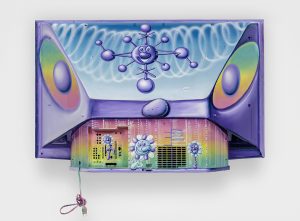