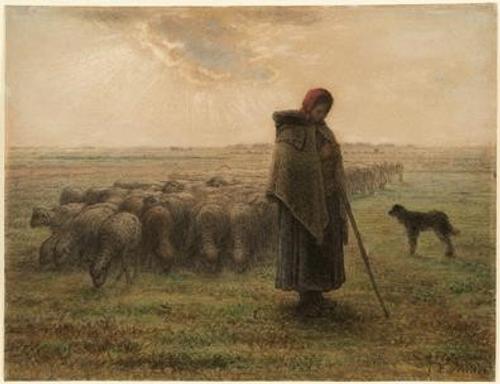 “Je suis paysan paysan” (I am a peasant’s peasant), the artist Jean-François Millet once declared. Born into a farming family in northern France, he astonished the Parisian art world with the frank portrayal of agricultural labor in oil paintings he exhibited at the semi-annual state-sponsored Salon during the mid-nineteenth century.

To his contemporaries, Millet must have seemed a rather unlikely figure to revive the use of pastels–dry sticks of vibrant, velvety color, which had been the medium of choice for aristocratic portraits in the eighteenth century but had fallen out of fashion around the time of the French Revolution. Nevertheless, in the 1850s and 1860s, Millet turned out an important group of pastels, often revisiting in this soft, powdery medium, the same subjects he had treated in uncompromising oil paintings.

An intimate, focused exhibition, Peasants in Pastel: Millet and the Pastel Revival will explore the circumstances of this artist’s turn to pastels around 1860 and will present a selection of work by pastellists from the subsequent generation who drew inspiration from his example: Camille Pissarro, Alfred Sisley, Giovanni Segantini, and Leon Lhérmitte.

Millet earned a scholarship to the École des Beaux-Arts in Paris but failed to find his way as an academic artist. In the mid-1840s, he began to paint scenes of farm workers winnowing grain, tending sheep, and sowing seed, often at a grand scale conventionally reserved for subjects from classical mythology or the bible. His oil technique became increasingly bold, with thick, dark paint applied like “trowel scrapings,” as one critic put it.

The seeming crudeness of both Millet’s subject matter and his style shocked contemporary audiences, who often suspected that he harbored a radical political agenda. But by the 1850s, his work had nevertheless begun to sell, thanks to an arrangement with Alfred Sensier, a dealer, critic, and art historian who provided Millet with materials and a steady income in exchange for his pictures. Sensier especially admired eighteenth-century pastels, and he encouraged Millet to produce small, bright, salable works in this medium. Following Sensier’s advice, the artist saw immediate commercial results. Eager to corner the market, the collector Emile Gavet commissioned no fewer than ninety pastels from Millet.

Millet died in 1875, and Gavet dispersed his vast pastel collection at public auction shortly thereafter. The critical and commercial success of the venture encouraged other artists to try their hand at pastels, which quickly gained widespread acceptance, graduating from a medium used primarily for sketching purposes to one commonly employed for fully realized, independent works. Manufacturers of artists’ supplies now offered a wide range of paper and even canvas supports specially designed for pastels, and in 1880 the Salon designated a room for work in the medium.

Pastels also played an important role in the Impressionist movement, which formally launched in 1874 and helped set the course of European painting for the next quarter century. Nearly all the key Impressionists experimented with pastels, whose brilliant colors and potential for bold, graphic handling suited the daring, independent spirit of the group. Thanks to their portability, pastels proved useful for working en plein air—outdoors, often in the countryside—as the Impressionist landscape painters preferred to do.

Bringing together pastels by Pissarro, Sisley, and some of their less-well-known contemporaries –Léon Augustin Lhermitte and Giovanni Segantini–the exhibition charts Millet’s determining influence on the generation of pastellists that followed him.

“Pastels, with their velvety sheen and aristocratic associations, might seem an unlikely choice of medium for the portrayal of rural life and labor,” said Emily Beeny, associate curator of drawings at the Getty Museum and curator of the exhibition. “But by exploring the use of pastels by Millet and his followers, this small, focused exhibition encourages us all to consider how artists’ choice of medium inflects our understanding of their subject matter.”