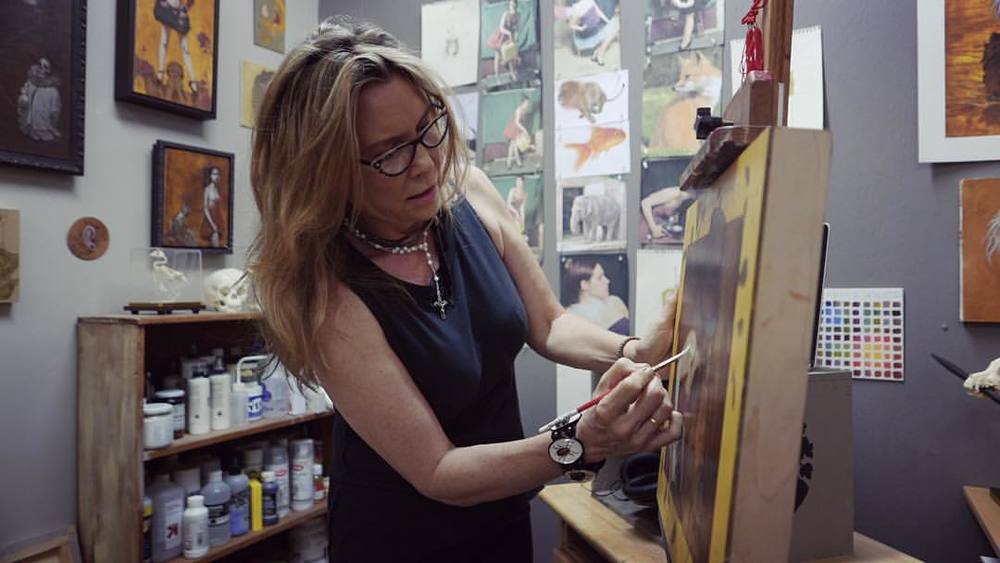 The Los Angeles and Vancouver-based self-taught figurative and contemporary surrealist painter whose modified oil and egg tempera techniques originally used by the Old Masters, creates works of magical realism – her subjects are often young, hauntingly innocent and teetering on the edge of naïveté with narratives seemingly emerging from the subliminal – plumbs her own psychological depths only to discover what makes her love work and life.

What historical art figure would you like to have lunch with and why? My all-time favorite painter is William-Adolph Bouguereau from the 19the century. I’m into materials, and the way he painted was so gorgeous and he and his second wife, who was his assistant, had a box that kept the secret ingredients to his medium that he painted with. I’d like to talk to him about what’s in the box, what were the secret ingredients.

What did you purchase with the proceeds from your first sale? It’s funny, but I’m into a French brush called an Isabey. There’s a 6159 series and they’re expensive and that was my purchase. I just bought more materials. 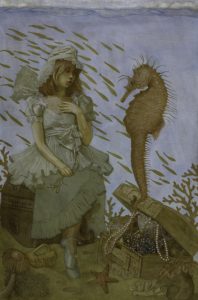 What words or phrases do you overuse? That’s interesting. I tend to refer to women [who are] with me with the name ‘beauty,’ because it hints at the way I see femininity. It’s like a loving, very pro-feminine way that I refer to them.

How do you know when a work is finished? I once had a teacher tell me you should stop before you think it’s finished. There is a point where I feel you’ve hit the mark and should just stop. What I like to do is turn the lights off in the room and when my protagonist is glowing, that’s how I judge when it’s done. I also try to judge the yin-yang relationship between the girl and the animal sidekick that is usually in the paintings. 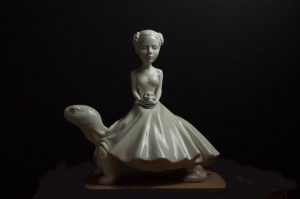 When and where were you happiest? I use an egg tempera technique called a Mischtechnik. I went to learn that in Italy near the south of France in 2011, and spent a month living in a self-sustained little co-op with about 10 other people and it was an amazing experience. The place grew their own food and we were learning this technique. There was a river with a waterfall that we would go swimming in and we would paint all day. [The people] were from all over the world and it was an amazing experience and it changed everything about the way I painted. Before that I was painting with acrylics and was basically 100% self-taught. I went there to study this technique and figure it out.

What is your most treasured possession? My glasses. I can’t see without my glasses. I’m also a glasses hoarder and I love old frames and new frames.

What is your ideal escape destination? I love hot springs and I love to go to Santa Fe, New Mexico. My favorite hot springs is Ojo Caliente that’s north of Santa Fe. 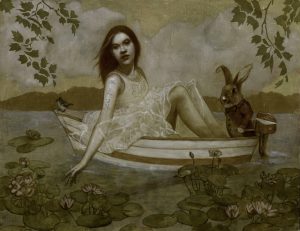 What’s the worst survival job you’ve ever had? I went to USC Film School, and my BFA is in cinema. I needed money at the time and I got an assistant accountant job at a mortuary, Groman’s Mortuary. At the time, they were in a house in the Fairfax district. I hated the smell of the formaldehyde and the whole thought of corpses freaked my brain out. I would climb up the fire escape, into the window on the second floor, because it was better than going through the front door. I had the worst time with that smell, because it permeated the entire building. That lasted a few weeks.

What TV series from your youth best describes your approach to life? A show I loved was Mash. I sort of feel like it fits my approach to life, because when things are really bleak out there, you can be in this war zone and still have fun, and seem to have a blast. I feel like you can have a better world within a worse world. 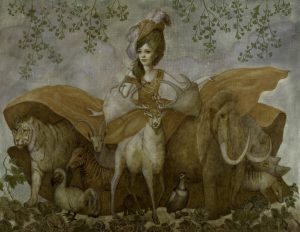 If you could change one thing about yourself, what would it be? My nose. I have this teeny nose and I’ve always wanted a Romanesque nose. I feel nose-deprived.

What is your most treasured memory? As I said, I was in film school at USC, and I was in my 310 Camera class, and there was this goofy teacher’s assistant wearing mismatched shoes, a skinny tie and a leftover pin-striped waiter’s outfit from some job he had. And I thought ‘What a goofball!’ And that’s who I ended up marrying. He was trying to put a dolly track together and was making a giant mess. That was 30-something years ago. 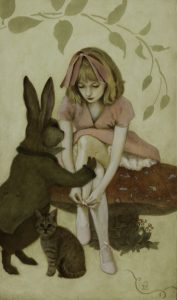 What makes you smile? When our family is all together. We have a daughter and a son and everybody’s all over the place, but when everyone’s together we’re all characters – it’s a family of characters.

What makes you cry? Truthfully, the state of our natural environment. I feel like animals don’t often exist as equal partners in this big world. I put animals in my paintings and they’re often sidekicks to my female protagonists.

What is your go-to drink when you toast to a sale? I just drink unsweetened iced tea with lemon. I do drink, but to be honest, I’ve had an ongoing ulcer since I was in my 20s so I don’t drink alcohol much anymore. Lemon is alkaline and it’s the weirdest thing, but it really works. It changes the composition of the tea. 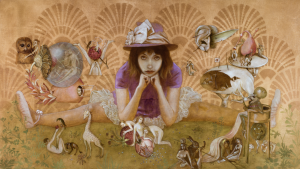 After an all-nighter, what’s your breakfast of champions? I don’t eat breakfast, but I love apples, all sorts of apples. I love eating an apple first thing in the morning, and an all-nighter for me is normal. I like staying up late and painting. I can go long hours. It’s quiet, there are no emails, usually no crises and it’s very mellow. I’m really a night owl, because there’s something about the night. I do feel more creative at night and I feel more logical during the day.

What’s your biggest flaw? My frustration. I get easily frustrated if my expectations are not met, which is clearly a flaw.

What’s your best quality? Taking and distilling many sources of advice. The mastermind is stronger than the individual mind. 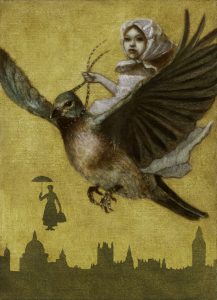 What is your current state of mind? My state of mind is exhausted. At the same time I’m elated and over the moon about what’s going on, and 2019 is already packed. I have a new gallery, Haven in New York. I also have a show at La Luz de Jesus in October 2019. 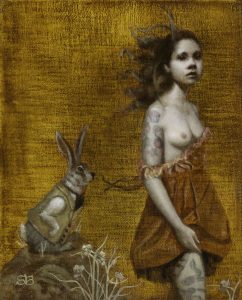 Who inspires you? Graffiti artists inspire me. I love a lot of the women graffiti artists coming up. I love Swoon and I believe she’s in New York. Lady Pink is in Brooklyn. There’s also a young graffiti artist, AliCe, who’s in Italy. I find her interesting, too. She tends to paint young women like I do. There’s some sort of narrative about her images, which is a similar way I like to paint, but she’s doing graffiti and murals. Someone pointed out the similarity between our work. I find her work interesting. They’re all interesting. I love graffiti art, because it’s art for everyone. That’s what I love so much about it. 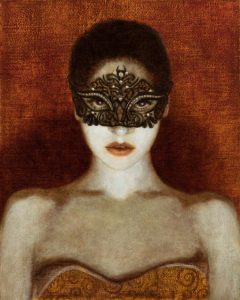 What do you consider your greatest achievement? My kids. They’re both incredible people, completely unique individuals. Their names are Eleanor and Harris.

If you were to die and come back as a person or a thing, what would it be? My favorite plant is a Moreton Bay Fig Tree. It’s from Australia and is also known as a dragon tree. L.A. does have some going up to Griffith Park. They’re the big huge trees with the big roots, and they don’t make edible figs even though they have fig in their name. In Australia there are mangroves and they’re just gorgeous. They’re unbelievable. And they basically live forever. They keep re-rooting and making new trees, so they never stop growing. They’re huge and unbelievable. If a redwood could re-root itself, it’s like that.

Cover photo by Eric Minh Swenson; all other images photographed by the artist

Deirdre Sullivan-Beeman’s exhibition, No Living Creature Knows is on view at KP Projects through April 24, 2021.

The artist can be reached at www.sullivanbeeman.com or on Instagram.