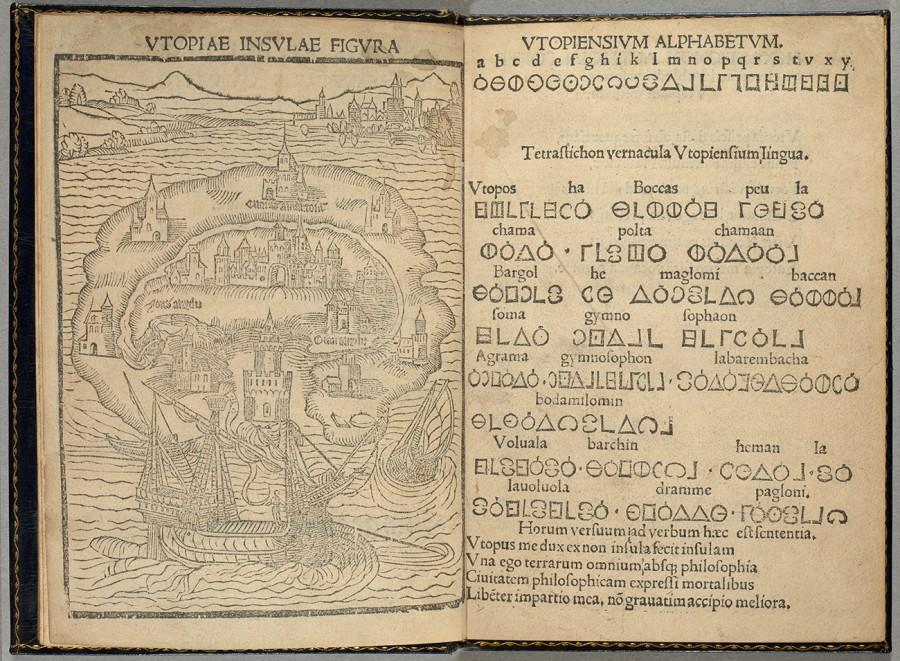 In partnership with LA arts organization Clockshop, The Huntington’s “Beside the Edge of the World” features works by artists Nina Katchadourian, Beatriz Santiago Muñoz, and Rosten Woo, and writers Dana Johnson and Robin Coste Lewis

New works of art and literature will debut at The Huntington Library, Art Museum, and Botanical Gardens in “Beside the Edge of the World,” one of the programs marking The Huntington’s Centennial. The exhibition, on view Nov. 9, 2019 to Feb. 24, 2020, features works by artists Nina Katchadourian, Beatriz Santiago Muñoz, and Rosten Woo, and writers Dana Johnson and Robin Coste Lewis, and will give visitors the opportunity to experience video works, poetry, and more in a gallery setting, as well as an audio tour and a sculpture installation in the gardens.

“Beside the Edge of the World” uses an item at The Huntington—Thomas More’s satirical work Utopia (1516)—as a thematic point of departure. The Los Angeles arts organization Clockshop, in partnership with The Huntington, invited the three artists and two writers to consider More’s work and its map depicting the fictional “Isle of Utopia.” The cohort spent a year delving into the institution’s library, art, and botanical collections to create works that make up the exhibition, which is anchored by an installation in the Virginia Steele Scott Galleries of American Art’s Susan and Stephen Chandler Wing that will include a selection of the objects used by artists in their research alongside their new works.

“We selected the artists and writers in ‘Beside the Edge of the World’ because of their interest in working in archives to re-frame and re-imagine history,” said Julia Meltzer, founder and director of Clockshop and co-curator of the exhibition with Jennifer A. Watts, curator of photography and visual culture at The Huntington and coordinator of the /five initiative. Watts added, “The exhibition will be revelatory. The work responds to the project’s directive with enormous energy and intellectual depth.”

Thomas More structured his story around a newly created world that described an alternative society. “More was pushing boundaries, and these new works are, too,” said Meltzer. “The artists expanded their inquiry to borders and edges, islands, forgotten histories, and utopian experiments that necessarily happen on the periphery.”

Artist Nina Katchadourian’s research centered on the theme of monsters in maps and rare books within The Huntington’s archive. Her kinetic silicone sculpture “Strange Creature,” which the artist describes as “half-baby, half-fish,” is inspired by Ulisse Aldrovandi’s Monstrorum Historia (1642); the English edition of Abraham Ortelius’ Theatrum Orbis Terrarum (1608?), considered to be the first true atlas of the known world; and the ancient Chinese text Guideways through Mountains and Seas, compiled between the fourth and first centuries B.C., which describes mythical beasts “within the cosmos of heaven and earth.” Installed in the Chinese Garden’s Lake of Reflected Fragrance, the sculpture is meant to provide an element of surprise for visitors, appearing at the surface momentarily before disappearing underwater. The brief glimpses that visitors may catch of the “Strange Creature” are intended to suggest that there is more around us than we can see or perceive.

Filmmaker Beatriz Santiago Muñoz focused on The Huntington’s botanical collections. Her video work, “Laurel Sabino y Jagüilla” takes its title from the vernacular names of two Magnolia species native to the artist’s birthplace and home on the island of Puerto Rico. Magnolia is an ancient genus, dating back 20 million years; its family, Magnoliaceae, has survived ice ages, mountain formation, and continental drift. Magnolia splendens is now endangered by logging and wood harvesting. Filmed in the rain forest of Puerto Rico and in the botanical gardens at The Huntington, the work imagines the relationship of the Magnolia genus to utopia, photography, soil, vision, and time.

Artist, designer, writer, and educator Rosten Woo created “Another World Lies Beyond,” consisting of a series of interrelated stories told through audio tours in the gardens along with a projection and artifacts installed in the gallery. Woo’s research focused on the life and work of Robert Hine (1921–2015), a scholar of utopian communities in California whose archives are housed at The Huntington. Each audio story (accessed via smartphone in the gardens) offers a glimpse of the idea of the perfect state and the world just beyond it: a historian slowly goes blind as he documents American communes, only to regain his sight suddenly in his final years; a dilettante is charged with drawing the border between the United States and Mexico, and instead creates an archive of every living creature he encounters before being dismissed and discredited by Congress; an archivist plots to rename the world’s largest tree and erase the history of America’s most successful Marxist commune. Additionally, one of Woo’s audio tours will guide visitors into the Chinese Garden where the phrase ‘Another World Lies Beyond’ appears on a placard at the main entrance to the garden. The phrase, which is also the title of the Woo’s work, is intended to prepare guests for the space they are about to enter, a space separated from the mundane world of daily life.

Author Dana Johnson wrote a short story, “Our Endless Ongoing,” that unearths the history of a remarkable woman, Delilah L. Beasley, who wrote and self-published The Negro Trailblazers of California (1919). Beasley recorded the lives and stories of pioneering African Americans living in California in the 19th and early 20th century, from gold prospectors and early settler families to the founder of a utopian black community near Fresno.  Johnson’s short story, along with a biographical essay of Beasley, is included in a limited-edition publication “Trailblazer: Delilah Beasley’s California,” published by Clockshop and The Huntington. A copy of The Negro Trailblazers of California is on view at The Huntington through Jan. 20 in the exhibition “Nineteen Nineteen.”

Poet laureate of Los Angeles Robin Coste Lewis took Chapter 14 of Henry David Thoreau’s Walden as the starting point for a new poem. In Chapter 14, “Former Inhabitants and Winter Visitors,” Thoreau conjures up the community of free blacks who lived around Walden Pond long before he arrived. Lewis’s poem, titled “Inhabitants and Visitors,” erases and rearranges words and phrases in Thoreau’s text to illuminate the world of the free black community that once lived at Walden Pond. A limited-edition book of Lewis’s poem, along with images of the draft manuscript of Thoreau’s Walden held at The Huntington, will be included in the exhibition and sold at the Huntington Store.