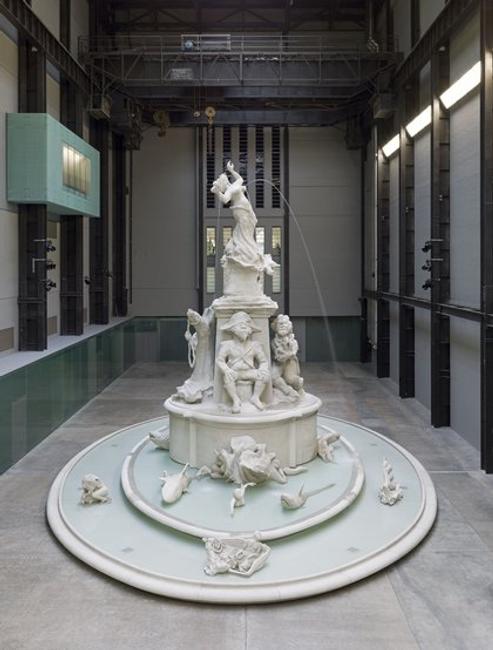 Pulling references from great artists, rifting on grand European fountains, and weaving together imagery to represent empire, colonialism and racism, artist Kara Walker delivers thought-provoking themes for a monumental new sculpture in London. Her latest site-specific work, the Hyundai Commission for Tate Modern’s Turbine Hall, is on view from October 2, 2019 to April 5, 2020.

“Is London ready?” writes Siddhartha Mitter of Walker’s new work, in the New York Times. “On the monument’s core and around its edges, she has installed allegorical figures of her own that offer a sardonic counterprogram to the celebration of empire. They display her hallmark style — grotesque, often violent, and layered with art-historical references and sideways cultural comment.”

Walker’s Fons Americanus is a 42-foot tall working fountain inspired by the Victoria Memorial in front of Buckingham Palace, London. The artist included a wall text reading,” “A Gift and Talisman,” for “the Citizens of the Old World (Our Captors, Saviours, and Intimate Family),” from “That Celebrated Negress of the New World, Madame Kara E. Walker.”

Rather than a celebration of the British Empire, as is the Victoria Memorial, Walker’s fountain explores the interconnected histories of Africa, America and Europe, in unfiltered terms. She uses water as a key theme, referring to the transatlantic slave trade and the ambitions, fates and tragedies of people from these three continents.

Among the many historical and art references, largely tying into colonialism and slavery, are nods to JMW Turner’s 1840 Slave Ship, Winslow Homer’s 1899 Gulf Stream; Damien Hirst‘s formaldehyde shark; and John Singleton Copley’s Watson and the Shark (1778).

Walker is perhaps best known for her use of black cut-paper silhouetted figures, often referencing the history of slavery and the antebellum South in the US through provocative and elaborate installations. Capturing the public’s attention in 2014 was her first large-scale public commission in the derelict Domino Sugar Refinery in Brooklyn which powerfully addressed the history of sugar production. Over 75 feet long, A Subtlety was a monumental sculpture of a sphinx-like figure, covered in sugar and surrounded by smaller figures made of toffee, brown sugar and molasses.

Frances Morris, Director, Tate Modern said: “Kara Walker fearlessly tackles some of the most complex issues we face today. Her work addresses history and identity with a powerful directness, but also with great understanding, nuance and wit.”