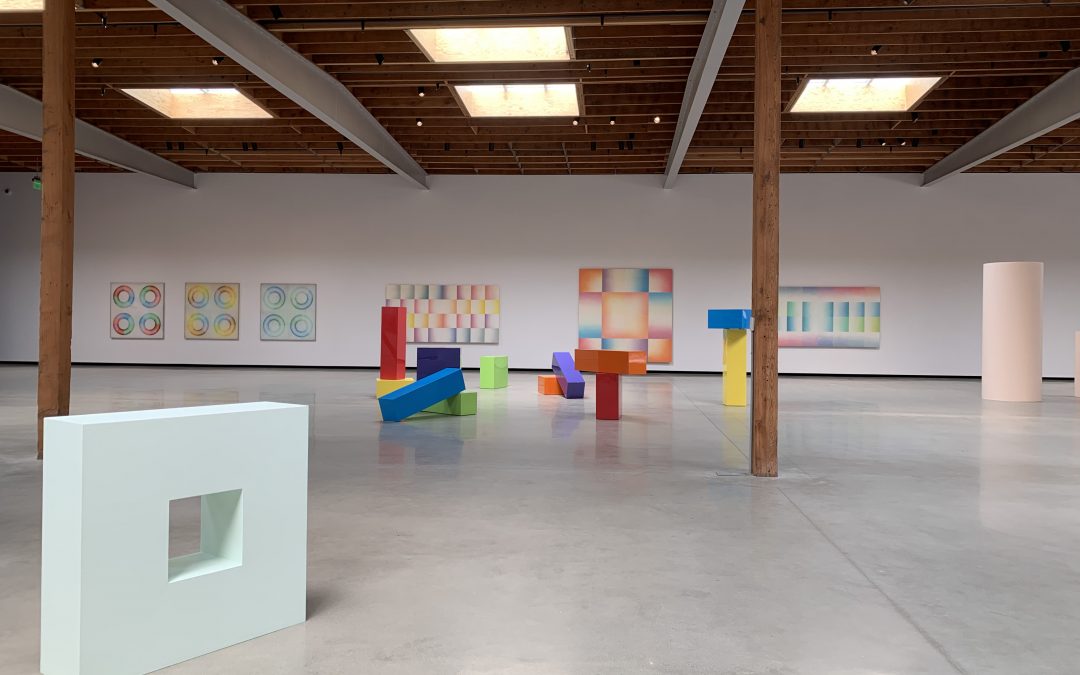 Judy Chicago’s latest exhibition at Jeffrey Deitch feels right at home: The show features work that was developed in Los Angeles and Fresno between the years 1965 and 1972. Not only are the artworks “home” in a geographical sense, but they are also physically present, when at various points in the past many of these works remained in the infancy of their creation or had been destroyed (whether for storage costs or otherwise). With this in mind, then, the exhibition is more like a celebration. A revitalization of sorts, it is also the first time that the full body of work from these years is displayed in unison. 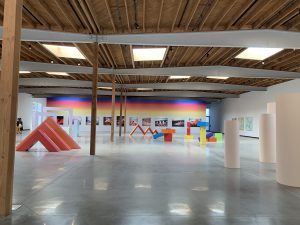 Stepping into the gallery is akin to stepping into a positive, powerful and playful world, but the undertones of the structures are anything but juvenile. There are small geometric structures like Clear Domes on Dark Base (1968) and Pale Green Domes with Solid Core (1968) – situated on mirrored trays. Larger geometric forms also decorate the gallery space – hard edges and soft colors stand on the ground and against the gallery walls. In the case of works like Rainbow Pickett (1965/2004), some do both. Large sculptures such as Trinity (1965/2019), Sunset Squares (1965/2018), Zig Zag (1965/2019), and 10 Part Cylinders (1966/2019) are examples of such revitalization and attest to “her affinity for exploring color through a very reduced formal vocabulary of geometric shapes” (JudyChicago.com) during the early, minimal period of her artistic career. 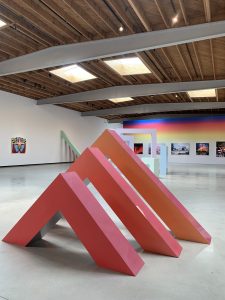 Rearrangeable Rainbow Blocks (1965), add to the colorful and experiential atmosphere. With these forms, Chicago has created spaces to walk in and through – just as she has done within the art world itself. Chicago’s role in the feminist art movement of the early 1970s cannot be overstated – with her signature work, The Dinner Party (1974–1979) an elaborate installation of place settings at a triangular table for legendary women – Chicago reimagined the way female-centered art operated. Even before that, though, Chicago was rebelling against the marginalization of women in many spaces. 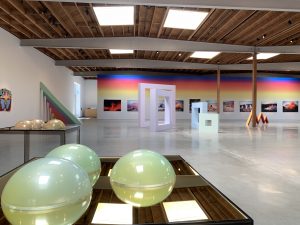 She enrolled in a male-dominated auto-body painting school, not because of an admiration for automobiles, but as “a pathway to approach making art” (Chicago, interview with the Los Angeles Times’ Carolina A. Miranda).Her works Bigamy Hood (1965/2011), Birth Hood (1965/2011) and Flight Hood (1965/2011), a synthesis of body and auto-body parts, are partially the result of this period (the images come from paintings she created in graduate school). These car hoods sprayed with automotive lacquer feature forms reminiscent of both male and female anatomy in bright, glossy colors. 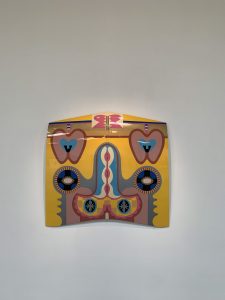 On the gradient back wall of the gallery, there are a series of prints from Women and Smoke (1972), some which feature colored smoke in a landscape, and others that do so with spray-painted women in the frame, as well. Immolation (1972), for example, features a woman (one of Chicago’s students at the time) in a desert, whose body is spray-painted green and who is seated behind a fire amid clouds of orange smoke. 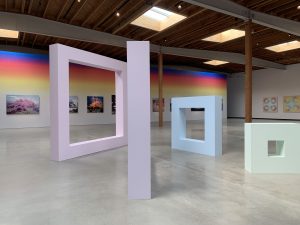 Like a ceremonial goddess, the woman appears to be timeless, otherworldly and powerful. This project was fueled by Chicago’s desire to create work that, unlike that of many male artists at the time, celebrated local natural landscapes without destroying them. Chicago has said, “There was a moment when the smoke began to clear, but a haze lingered. And the whole world was feminized—if only for a moment.” (Artsy) Her collaboration with her students took place at Fresno State College, which featured the first feminist art program in the US, where Chicago was, in her own words, “helping young women find a way to make art without having to do what I had to do in my first decade of my professional practice, which was distance myself from my gender” (Artsy). 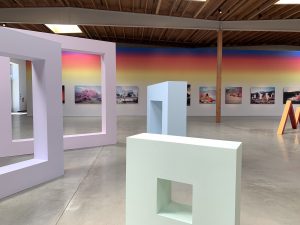 It makes sense, then, that these images are the backdrop of the exhibition and what viewers see upon entering the gallery: They are the framework and the end goal of Chicago’s work, captured moments of the artist’s impact in real time. 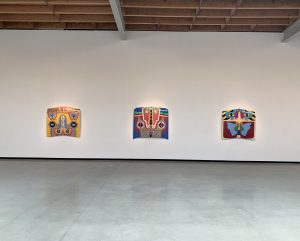 The names of several of those prints make it clear how Chicago is directly tied to Southern California as an art-maker. Indeed, one metal print is literally dubbed, Santa Barbara Museum Atmosphere (1969). There is also the acrylic Pasadena Lifesavers Series (circa 1970), which, like her prismacolor illustration boards, showcase Chicago’s unrelenting investment in exploring the nuances of everything from primary colors to the “flesh tones that quiver with sensuousness” (Los Angeles Times) that made her so distinct and so controversial. With these fan studies and more, Chciago was attempting to establish “a color vocabulary built on emotive associations” (Los Angeles Times). 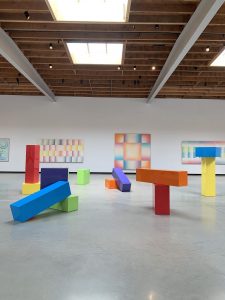 Chicago continues to prompt change in the art world, providing arts education and promoting social awareness through the various arts programs she has established. Through the Flower, Chicago’s non-profit feministart organization, was founded in 1978, and continues to promote the mission “to educate a broad public about the importance of art ad its power in countering the erasure of women’s achievements.” Slated to have at least one full-fledged retrospective of her work in 2020, Judy Chicago is decidedly not going anywhere. This exhibition involves works seemingly “unearthed” from yesteryear, yet they feel as relevant as ever, embodying both a particular “attitude toward authority” (as the artist would call it), (Los Angeles Times) and the potential to see through, rearrange, and reimagine that authority in technicolor. 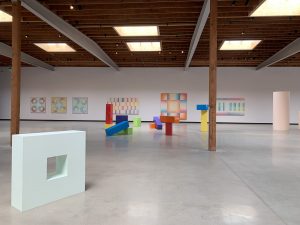