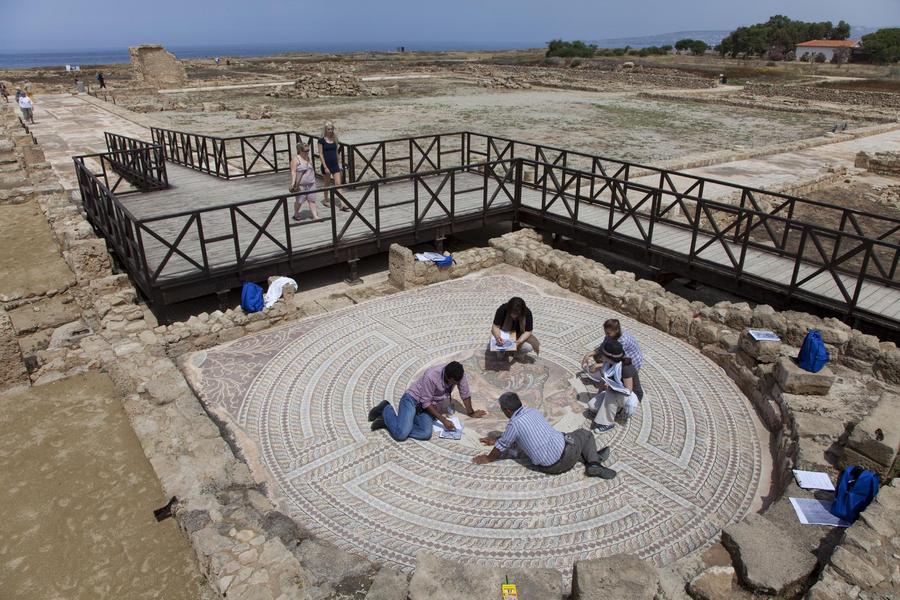 Participants in the 2014 Mosaikon course Conservation and Management of Archaeo- logical Sites with Mosaics conduct a condition survey exercise of the Achilles Mosaic at the Paphos Archeological Park, Paphos, Cyprus. Continued work at Paphos will be undertaken as part of Ancient Worlds Now.

The J. Paul Getty Trust will embark on an unprecedented and ambitious $100-million, decade-long global initiative to promote a greater understanding of the world’s cultural heritage and its universal value to society, including far-reaching education, research, and conservation efforts.

The innovative initiative, Ancient Worlds Now: A Future for the Past, will explore the interwoven histories of the ancient worlds through a diverse program of ground-breaking scholarship, exhibitions, conservation, and pre- and post-graduate education, and draw on partnerships across a broad geographic spectrum including Asia, Africa, the Americas, the Middle East, and Europe.

“In an age of resurgent populism, sectarian violence, and climate change, the future of the world’s common heritage is at risk,” said James Cuno, president and CEO of the J. Paul Getty Trust.  “Cultural heritage embodies a global community united by a common need to make things of beauty and usefulness, and to compose stories and rituals about humanity’s place in the world. We will launch with urgency and build momentum for years to come. This work must start now, before more cultural heritage is neglected, damaged, or destroyed. Much is at stake.”

Over the coming year, Getty will engage major global partners from schools and universities, cultural institutions, non-governmental organizations, and the private sector in this urgent work. Activities are underway now, with an official launch planned for summer 2020. The initiative will continue through 2030 and beyond.

In addition to partnerships, Getty will dedicate the cross-disciplinary work of its four programs—Getty Foundation, Getty Research Institute, Getty Conservation Institute, and Getty Museum—to this effort.

“Getty is one of the leading global institutions committed to the study and preservation of ancient cultural heritage, and its convening power and deep expertise allow it to effectively undertake an initiative of this magnitude,” said David Lee, chair of the Getty Board of Trustees.

In this regard, Getty Museum recently launched a series of exhibitions and education programs related to the classical world that began with the exhibitions Palmyra: Loss and Remembrance and Beyond the Nile: Egypt and the Classical World, the latter a study of the influence of Egypt throughout the Mediterranean region. It will now expand this series with upcoming exhibitions focusing on ancient Mesopotamia, Persia, Thrace, Assyria, and the Levant.

Other Getty activities already underway include grant support for the digital mapping of excavations at the UNESCO World Heritage Site of Çatalhöyük in Turkey; conservation efforts in Southeast Asia; and conservation efforts at the Byzantine-era archaeological site of Nea Paphos and its necropolis on the island of Cyprus.

Other Getty activities planned or in progress include support for a traveling research seminar on the art and architecture of ancient Thrace; a program for archaeologists from Turkey, Greece, and Bulgaria to study the histories of ancient monuments and sites in Turkey; an international course on the conservation of earthen architecture to be held in Abu Dhabi; a book focusing on the intentional destruction of cultural heritage in pursuit of strategic and political objectives; and support for training at the Iraqi Institute for the Conservation of Antiquities and Heritage in Erbil, capital of Iraqi Kurdistan.

“Getty’s initiative is critically important because, tragically, threats to the survival of the world’s cultural heritage through neglect, purposeful and collateral destruction, overdevelopment, and climate change are putting at risk the lessons and legacy of the past,” said Irina Bokova, former director-general of UNESCO. “Such threats will require global partnerships and the work of non-governmental, non-political organizations such as Getty to heighten understanding on a global scale of the importance of the world’s ancient cultures and common past.”

Former British Museum director Neil MacGregor will serve as a consultant to the Ancient Worlds Now: A Future for the Past initiative. “Human history is inevitably a history of entanglements and networks, of overlapping economic, political, and cultural developments,” MacGregor said. “In today’s sectarian violence, the complexity of the past is distorted through ideological manipulation, neglect, and destruction. Getty’s bold new initiative will address this by developing an understanding that the world’s cultural heritage, is our common heritage and that it continues to shape us all.”

Cuno said immediate next steps include recruiting supporters and strategic partners who share the Getty’s passion and commitment to the protection of ancient cultural heritage.