Mary Corse : ‘A Survey in Light’
Following Her Curiosity 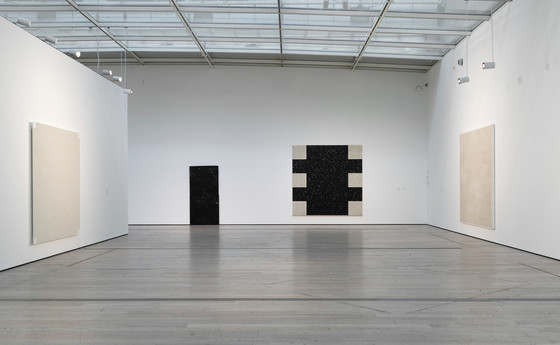 Mary Corse: A Survey in Light

You may have heard about the Mary Corse survey exhibition currently on view at LACMA. Before travelling to the West Coast, it was on view at the Whitney Museum of American Art in New York; while last year Dia: Beacon also revealed a new gallery dedicated to her work. 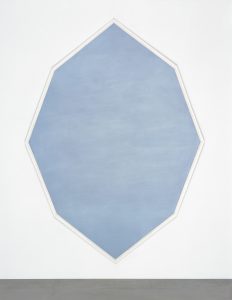 Having emerged in the 1960s in association with the West Coast Light and Space movement, and despite decades of commitment to her craft, this is Corse’s first solo museum survey. According to Elliot McDonald, senior director of Pace Gallery (one of the galleries that represents Corse, in addition to L.A.’s Kayne Griffin Corcoran), this delay is in part due to the reality that “for much of the last century the forces that shaped the appreciation and discourse around Modern and contemporary art paid far greater attention to Western male white artists, at the expense of everyone else,” adding that this realization, “has catalyzed a re-examination and invigorated appreciation for artists like Mary Corse, someone who has contributed as much to painting, our visual culture, and our understandings of subjective experience as any other artist of the last 50 years.” 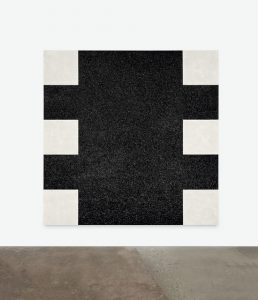 Corse has commented about this ostracization, saying to The Art Newspaper, “For years, I was not accepted at all.” In a group exhibition that featured such artists as Robert Irwin and Dan Flavin and one of her 20-foot paintings, “It wasn’t even mentioned that I was in the show in the review.” This is not to say that Corse has been outside the discourse surrounding abstraction, minimalism and the movement she is associated with. Corse’s work was featured at the Guggenheim, LACMA, the Whitney and other institutions only a few years after she graduated from Chouinard Art Institute, now known as CalArts. 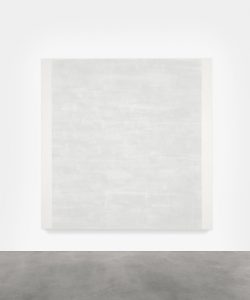 Corse has been known to follow her curiosity and doing what felt right to her, as opposed to what was deemed the most logical choice, financial or otherwise. At a time when many lived and worked in New York City or downtown Los Angeles, Corse moved to Topanga Canyon, where she still works today. In a previous interview with Artsy, Corse explained that she “never saw art as a career,” and that she “always painted for [her] sanity.” 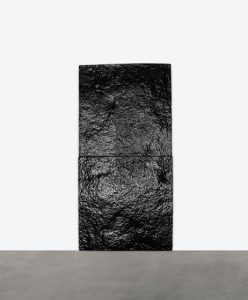 In this exhibition, different parts of Corse’s career are represented, including “her early shaped canvases, freestanding sculptures, and light encasements that she engineered in the mid-1960s, as well as her breakthrough White Light Paintings, begun in 1968, and the Black Earth Series” that came afterwards. These pieces curated together navigate “the possibility that light itself could serve as both subject and material of art” (LACMA). 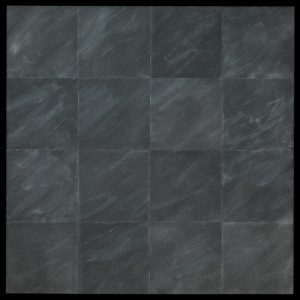 In the galleries, people walk back and forth, experiencing the perceptive flexibility of what hangs before them. Large canvases of different shapes, such as Untitled (Hexagonal White) (1965) and Untitled (Octagonal Blue) (1964) represent Corse‘s early shaped canvas works, where she would use fields of color with a layer of small sprinkled metal flakes.

She later discovered the possibilities of painting with just white, and keeping with this reductive approach, she began working with squares. Such is the case with her “light paintings” – fluorescent light boxes powered with tesla coils. In Untitled (White Light Series) (1966), fluorescent light, plexiglass, and acrylic on wood come together to form a glowing box of shifting hues, depending on the light that is reflected upon it. The light emanating from within the plexiglass creates a halo upon the wood it’s nestled between. With Untitled (Clear White) (1968), plexiglass, neon fixtures, and high frequency transformers unite to create another radiating, refractory piece. 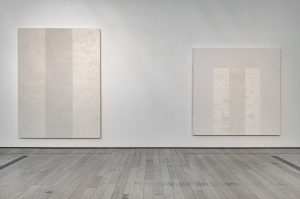 Evidently, Corse’s work is as complex in its construction as it is in its goals. In order to create these illuminated works, she had to enroll in physics classes, where she learned to construct generators that would power many of her creations. She states about this time, “I wanted to know what truth was…objective reality had truth…” and it was with light that she felt she could reach this objective reality. She would later retract this, however, claiming there was no objective reality, ultimately utilizing light as a tool in order to achieve subjectivity through shifting perception. 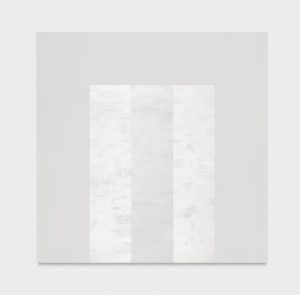 Paint, though, remains Corse’s preferred media. This makes sense given that in her early teens she was attracted to researching abstraction, learning in school about such artists as Hans Hofmann, Josef Albers and Willem de Kooning. The L.A. Times’ Christopher Knight refers to Corse as “a painter amid sculptors and installation artists who left painting behind.”

Corse’s ongoing commitment to painting is evidenced by works that include Untitled (White Inner Band), (2003), made of glass microspheres and acrylic on canvas. What appears to be a large horizontal white canvas reveals itself as a segmented piece with bands of different shades, revealing themselves to be shiny or matte – all dependent on where the viewer stands. The works cannot be experienced passively; one must move around them and in front of them in order to be receptive to their shimmering luminosities. This is what LACMA refers to when they correctly state that “at once minimal and maximal, material and immaterial, Corse’s paintings resist immediate apprehension and invite us to take part in the act of discovery.” 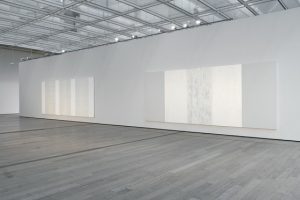 Much positivity has come from this exhibition: An artist worthy of such recognition has years of her creative thinking and labors recognized by large audiences nationwide; a woman’s place in the West Coast Light and Space Movement, which has long focused on male artists, is emphasized and celebrated; Corse’s approach to art-making, which is motivated not by market success but for the sake of creative growth, has garnered acknowledgment, analysis and respect. That said, for an artist so prolific, the exhibition features only a little more than 20 of her pieces. 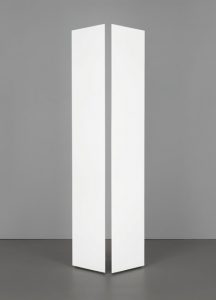 Of Corse’s work, it has been written: “Indeed, there’s plenty of intellectual—and often physical—heft behind artworks that are about something weightless: light” (Artsy). Corse has spoken about this in a separate Getty Research Institute video interview, stating, “They (the ideas) aren’t intellectual when you’re working, it’s intuitive…it’s work.” Considering that Corse committed to making this work for so long, the exhibition almost seems rushed. This is also due to the magnitudeof the ideas she seeks to portray – “I have no interest in art that is about a political statement, or grotesque…because that to me is the finite world, this is what we don’t want to be stuck in, I don’t want to be an ant on that freeway. I crave…something beyond this finite existence.”