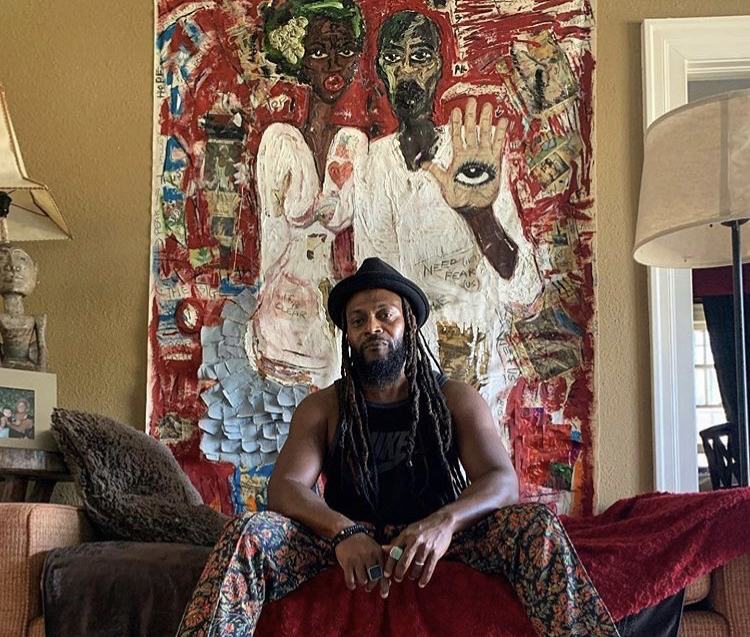 LA-based, Trinidad-born painter/designer/musician/multi-platform creative, 51-year old Miles Regis – an embracer of storytelling in  stylized renditions of fundamental scenes of love, loss, freedom, survival, activism and living history, and whose large-scale mixed media works on canvas and linen incorporate collage elements of denim, buttons, leather, printed matter and patches of eclectically-sourced found textiles, along with his gestural, richly hued abstract and figurative painting techniques – plumbs his own psychological depths only to discover what makes him love work and life.

What historical art figure would you like to have lunch with and why? I’d love to go with a couple people. The reasons why vary, but I’ve just been completely mesmerized by their personalities, their careers and their choices in their personal lives. I was named after Miles Davis and he is known as a jazz musician and activist, but his art is phenomenal. Eerily, I’ve seen so many of his pieces in person and up close, every stroke reminds me of my work in a really freaky way – almost like there’s a spiritual connection, an unspoken similarity – and then there’s the idea that I was named after him. So many people I’ve met over the years who knew him say that I remind them of his mannerisms, his gestures. My dad is a jazz fan and a huge fan of Miles and decided to name his first born after him. 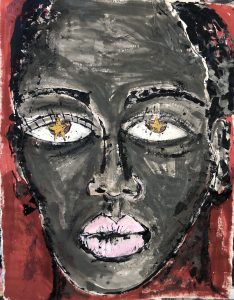 What did you purchase with the proceeds from your first sale? I was fortunate in that I did an Erykah Badu video in 1997 and the money I got for doing that video coincided with one of my co-workers [deciding] to purchase a piece from me. I was working at the time at Orion Pictures and [with] the proceeds from both checks I bought a Neumann microphone. It was very expensive and I still use it practically daily recording vocals for song ideas. It was quite a valuable investment that I cherish. I think I probably bought furniture and more canvases and paint – and the microphone – which is  what I recall spending the money on.

What words of phrases do you overuse? ’Love,’ which is a good thing. That’s my response to anything. If somebody shows me something beautiful, my response is ‘love.’ Another word I overuse is the ‘f’ word, especially when driving in traffic. With adults when I see something I love, it’s like ‘fuck.’ They both go hand in hand. 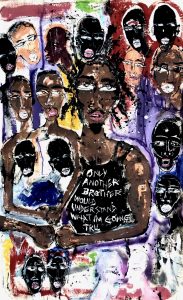 How do you know when a work is finished? I usually go off of the energy and if while I’m creating there’s a pause, then I determine that if if I did something more – add an additional stroke that would alter energy significantly – at that moment I know I need to stop and that’s the way the universe intended to be. That said, the next day, I look at it and go, ‘Ooh.’ Usually, you know; the energy speaks to you and when the energy is right and you know if you do anything else, the energy’s gonna shift.

When and where were you happiest? Now. I believe that I am the best version of myself right now – the strongest, the most well-prepared to deal with life. I have the most cherished memories that I hold dear to me, people I love, great family, great friends. I believe it’s now.

What is your most treasured possession? Philosophically, it’s peace of mind and my good health. If we want to talk about material possessions, I’ve been given some family heirlooms from my parents. I also have my grandparents’ wedding presents from 1929. I have a clock that was a wedding present that I really cherish, as well as a bronze bell. The clock isn’t working and I’ve been planning to get it fixed. It’s beautiful, and if there were a fire in my house that would be the one thing I’d run to before I ran out.

Where is your ideal escape destination? Somewhere tropical, warm and with great beaches. I love Hawaii, Kauai, in particular. I also love a lot of the Caribbean islands. And going back home to Trinidad is really special. Just give me a sandy beach any day. 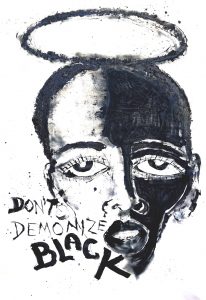 What’s the worst survival job you’ve ever had? I have to tickle a lot of thoughts to get to this dream artist situation. I temped for two years out of college and did several horrific jobs. I worked in a fax room of a law firm, but even with that, there was a silver lining, because I got to see so many contracts and kind of got a sense of contract law. It was a plus. I was a ‘Temp of the Month’ at my agency and I was stuffing envelopes for two weeks and I said, ‘I have a college degree guys, please hook me up. This is the worst job I’ve ever had and could you please get me something better?’ They landed me a gig at Orion Pictures.

What TV series from your youth best describes your approach to life? The Six Million Dollar Man. I feel that the best quality you have is to reinvent, rebuild, better stronger, faster – and I’m striving. 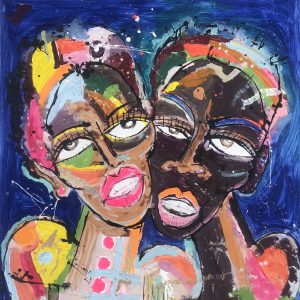 If you could change one thing about yourself, what would it be? I guess that goes to the way you talk about what’s your strongest quality and your biggest flaw. I think I’m really a very sensitive human being. I’m open to energy and I pick up on energies. I think that’s a strength and that’s a gift to have – especially with human interaction as a father, a husband. It’s a strength to have that sensitivity. The flip side of that is that sometimes I see things that I’m not supposed to see or feel – things ordinarily that one would not pick up on – and that tends to sometimes be a problem. 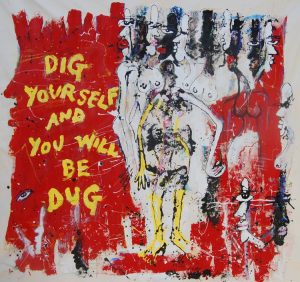 What is your most treasured memory? My childhood. I left Trinidad at 21, and my parents are still there. My mom’s 90 and my dad’s 85. I miss them dearly and being a child. They still are wonderful parents. I miss being a child in their house.

What makes you smile? My children – and this question is the perfect transition. I have two children, a 16-year old son and a 13-year old daughter. They’re the most amazing human beings in the world. Life makes me smile. I have a heightened sense of appreciation. I love colors, the wind and the trees, smells. I’m that guy. I appreciate a lot and I’m thankful for a lot. But the simple things get to me. My kids – seeing them happy and  seeing them flourish. 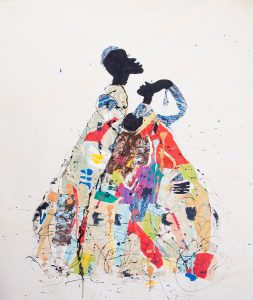 What makes you cry? I’m a very emotional man – music and expressions of love make me cry. I cry during a commercial, in a movie. I saw a friend in traffic who I was completely not expected to see and just seeing that friend in traffic made me tear up. Beauty really excites me; so do unexpected, surprising moments in life.

What is your go-to drink when you toast to a sale? Johnny Walker Blue. I drink Black practically every day, because I’m a Scotch guy. If I have a huge win and can splurge, there’s nothing like Johnny Walker Blue. It’s so smooth and heavenly. That’s my sip of the nectar of the gods. I’m a neat guy, so with [Johnny Walker] Green I would do rocks, it brings out the best flavor in the Green. 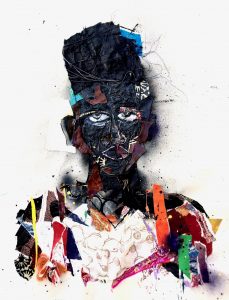 After an all-nighter, what’s your breakfast of champions? Carilbbean food. I would do Trinidadian bake and shark. It’s a dish. The fish is in the middle and then there’s the bun. We call it bake. Or another traditional Trinidadian breakfast I absolutely love is doubles or bake and buljol. Once you taste it, you’re gonna be like, “Miles, I see why this is what you go for.” 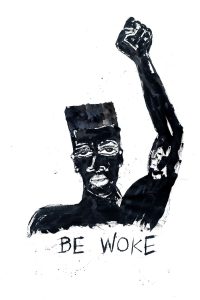 Who inspires you? People who stand for love, peace and unity. I can break that down: I’m very mesmerized by people who display extraordinary levels of excellence – Barack Obama – phenomenally gifted people – jazz greats like Miles Davis. Pop icons – Michael Jackson, Prince, Stevie Wonder, Whitney Houston’s voice was incredible. Then there are political activists – Toussaint Louverture. He’s a guy who led the Haitian revolution and gained freedom for Haiti, but he had this vision to unite all of the Caribbean and get most of the Caribbean independence. He wasn’t successful, but he did it for Haiti. Dr. Eric Williams, the Trinidad Prime Minister who fought for independence. The Nelson Mandelas of the world.  People like that really inspire me and Trinidad personalities, in particular, because you get inspiration when you’re younger. 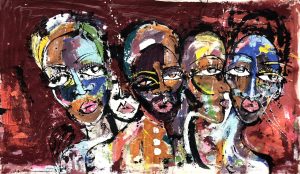 Visual artists like LeRoy Clarke, Peter Minshall who did the opening ceremonies for the Olympics. And I must mention my uncle Alexander King. He’s a phenomenal artist and is my mom’s brother. He inspired me to become a painter. This notion of a struggle and bringing unity and providing healing, working on behalf of marginalized peoples of the world – that excites me, and all the art pioneers – Picasso, Basquiat. 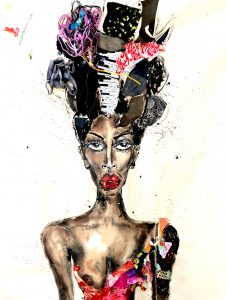 What is your current state of mind? I am excited. I am centered and ready to share a new body of work that I’m really proud of producing. I’m hoping that my work provides comfort, healing, love that encourages us to think and move towards uniting and loving each other in a way that we really need to at this point in our history. 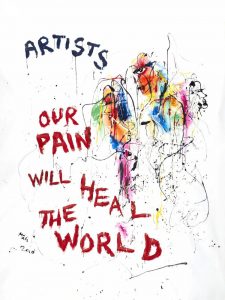 Our Pain Will Heal the World

What do you consider your greatest achievement? My children. 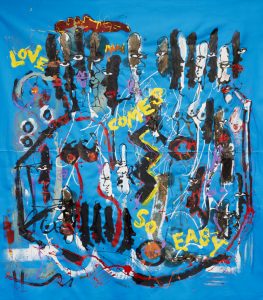 If you were to die and come back as a person or thing, what would it be? That was the question that stumped me. A dove. 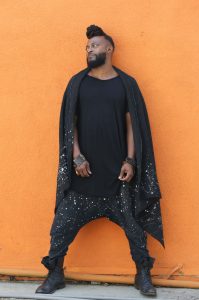