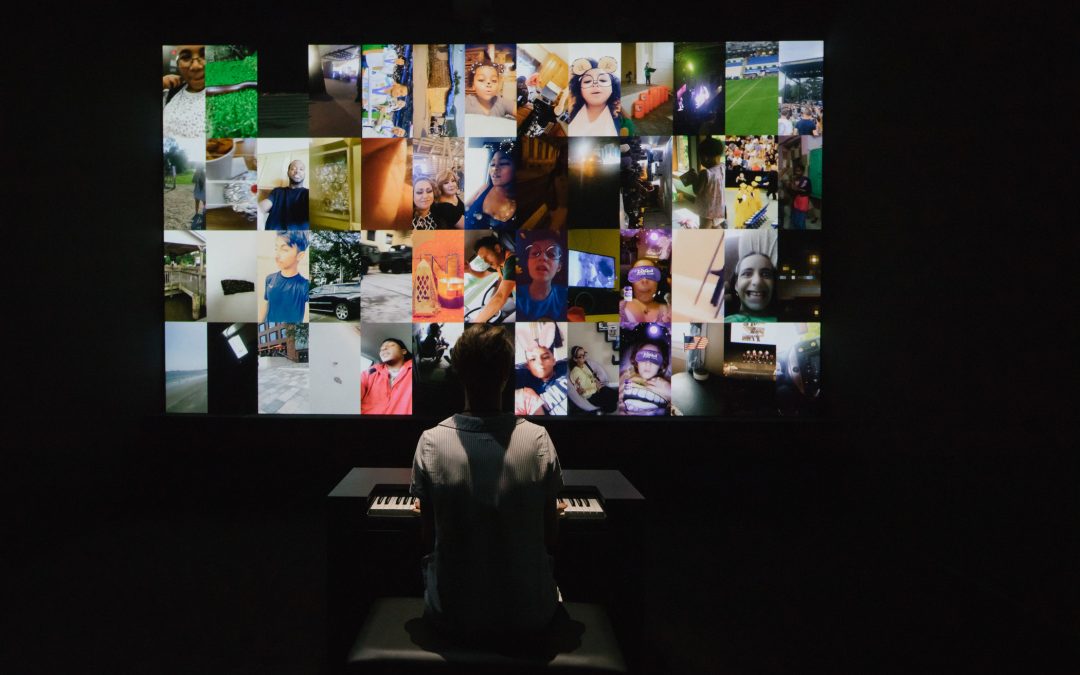 Some might ask “What is Snapchat?” Snapchat would answer: “Snapchat is a camera—no, not the kind with a flashbulb and a lens cap. It’s a new kind of camera that’s connected to your friends and the world. Over 180 million people use it every day to talk, play, learn — and take some pictures, too.” Those who grew up in the age of social media are accustomed to using Snapchat, FaceBook, Twitter or Instagram to share nearly everything about their lives. What differentiates Snapchat from these other platforms is that the content disappears. It is not stored in the cloud or on a device to be scrutinized or shared at a later time. Basically— it’s there and then it’s gone. Christian Marclay likened a “Snap” to a conversation — something that cannot be returned to. It becomes discarded information. 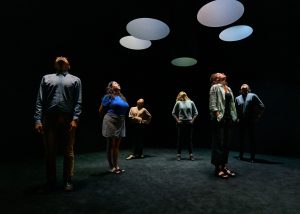 Although Marclay gained world-wide recognition with his 24-hour film The Clock, (2010) where he composited short clips from thousands of films, splicing together fragments that showed the actual time of day, he was originally known for his work with sound. In a recent piece, 48 War Movies (2019), that debuted at the 2019 Venice Bienniale, 48 war films are layered on top of each other with their soundtracks playing simultaneously. The visible image is thin concentric rectangles that never reveal enough information to distinguish which exact films Marclay selected. The result is an ever-changing image surrounded by a cacophony of overlapping war movie soundtracks. 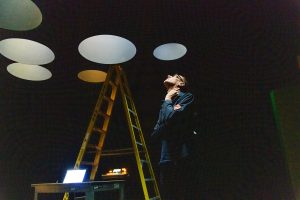 Clips from Snapchat are the source material (though not the content) for Marclay’s new and evocative installation, Sound Stories, on view at LACMA through October 14. Marclay first displayed Sound Stories in June 2018 as part of the Cannes Lions International Festival of Creativity, where it was on view for just five days. At LACMA, viewers will have more time (August 25 – October 14, 2019) to absorb and interact with Marclay’s inventive use of Snapchat clips. Marclay was invited to mine this collection of “public content” and worked with Snapchat’s engineers to create new algorithms based on specific searches — categorized by sounds rather than by subject matter. 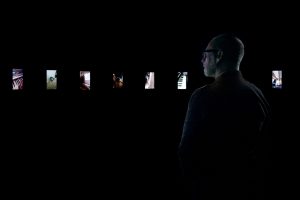 At LACMA, Marclay invites viewers to slowly travel through the exhibition while taking in the subtle qualities of each work. The large gallery space has been divided into five smaller dark rooms, each with an audiovisual installation. All Together, (all works 2018) serves as an introduction to Marclay’s process. Across ten smartphones embedded into a curved wall, Marclay has sequenced a musical composition based on similar sounds culled from over 400 clips. These sounds include the pitter-patter of rain, the sizzle of a fried egg, the noise made when shoes hit pavement and actual musical instruments being played, as well as the ring of a text or an incoming phone call. In the display, each clip only lasts a few seconds and while the image initially draws us in and is what we see, the choreography is based on how the sounds work together collectively. 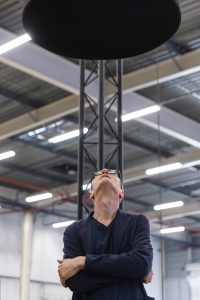 In Talk to Me/Sing to Me, what seems like hundreds of smartphones are suspended from the ceiling at varying heights. Each phone displays a blinking text that invites the viewer to sing or talk to it. The microphone on the phones picks up the viewer’s voice and links it to a database of thousands of clips that have been stored within each device. After a phrase or word has been sung or spoken by someone in the room, there is a pause and then the phones broadcast clips that mimic the utterance. 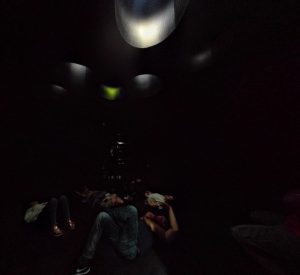 To create this work, Snapchat’s engineers devised an algorithm based on speech-detection and signal processing technology. When activated, the room comes alive. The space is suddenly filled with a collage of short cellphone videos clips that simultaneously echo the viewers’ words. While adult audiences might be hesitant to participate, the work will certainly appeal to teens and children who have no issues yelling into the darkness. 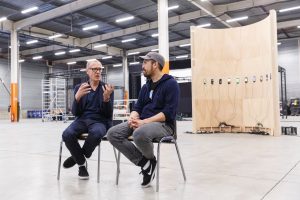 Christian Marclay and Andrew Lin, Director of Engineering, Snap Inc. in front of All Together (detail), 2018; photo © Stephane Sby Balmy

In contrast to Talk to Me/Sing to Me, only one or two people can interact with The Organ at a time. A functional keyboard connected to custom software and a projector is placed in the center of the space in front of a large screen. When the keys on the organ are pressed, long vertical strips containing four separate Snapchat clips appear on the screen. As the viewer plays a song or hits different keys, the clips move along the wall broadcasting sounds that correspond to the musical notes. The who, what or where of the video images are a secondary concern. Marclay is interested in mapping the notes on the keyboard to sounds within Snapchat clips. 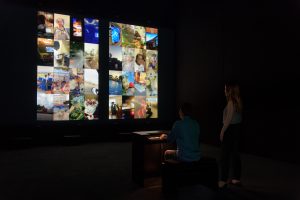 While The Organ and Talk to Me/Sing to Me, invite viewer participation, the other works are not interactive. Instead, they explore different manifestations of sound mapping. Viewers must look up to experience Sound Tracks, as this piece uses tablets embedded into wide tubes of varying lengths in the ceiling. Using Snapchat’s “turtle mode,” Marclay has slowed down clips full of sounds of play and happiness, transforming them into something eerie and disconcerting. 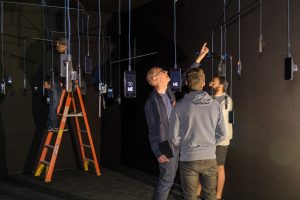 It is delightful to wander back and forth within the installation, listening as well as watching what appears on the different screens. While Marclay has conceived Sound Stories as a work about found sounds, the piece also has a certain visual cache. By appropriating the wealth of imagery contained within Snapchap, Marclay has created an immersive experience using clips of and about mundane and sensational activities that take place every day. Though based on the combined efforts of Snapchat’s engineers and his own sophisticated and idiosyncratic methods of collage, the experience of Marclay’s work exceeds expectations and motivates thinking about the multi-sensory possibilities of social media.