Terry Allen: ‘The Exact Moment It Happens in the West’
A Cutting, Engaging and Inventive Imagination 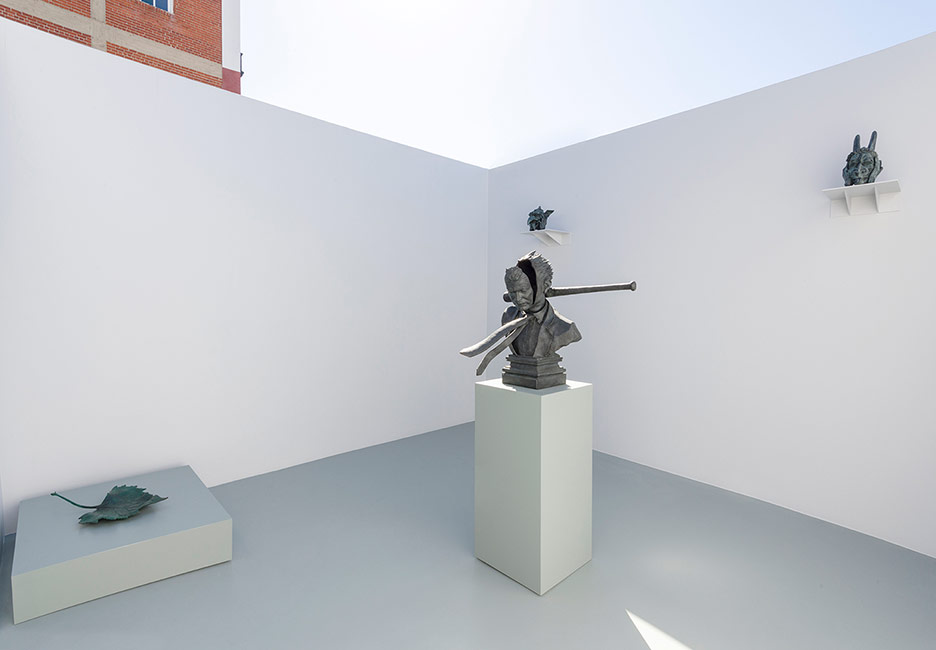 The Exact Moment It Happens in the West

Terry Allen is first and foremost a story teller. He is a gifted musician and artist who also makes amazing paintings, drawings, sculptures and installations that confront head-on on a wide array of subjects ranging from the personal to the political. His works are sometimes collaborations (with his wife, actor Jo Harvey Allen, as well as others), and during a recent talk at the Hammer Museum, he elucidated his process and the relationship between his music and his visual art. 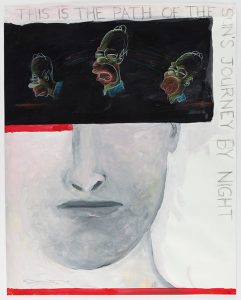 What makes his exhibition The Exact Moment It Happens in the West so extraordinary is that both his music and visual art are on view and integrated so gallery goers can begin to understand the overlap of both mediums and how they resonate within Allen’s greater practice. In conjunction with the exhibition, Allen and his Panhandle Mystery Band also performed two sold out concerts at Zebulon in Los Angeles‘ Frogtown neighborhood, making the exhibit a mutli-media event. 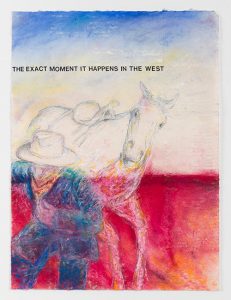 At L.A. Louver, the exhibition The Exact Moment It Happens in the West is installed chronologically filling both floors of the gallery. It is a visual trajectory through Allen’s life and work from 1960 to the present. Divided into sixteen sections, many of which are accompanied by a musical complement that can be heard via provided headphones, the show leads viewers on an intimate journey that reveals Allen’s interests and particular way of looking at the world. Each series is well-represented with numerous pieces, as well as music and/or explanatory text. 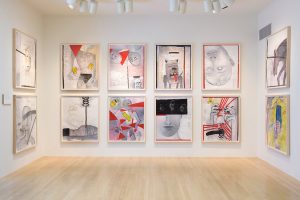 Installation photography: The Exact Moment It Happens in the West

Section one showcases a selection of Allen’s early drawings from the mid 1960s. These works are mixed media, cartoon-like abstractions that reveal his keen wit and facile hand. They are accompanied by the song Red Bird (1968), with the juxtaposition of drawings and song serving as an introduction to this artist’s multi-faceted practice. 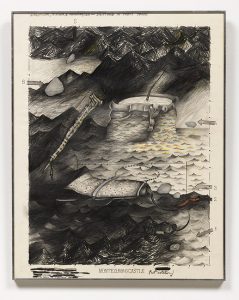 Juarez (1969-75) is an album and visual art project in which Allen explored a range of media including performance, writing, drawing and collage. His work on Juarez confirmed the power of narrative and the different ways one could convey a narrative. Allen’s earlier pieces are quirky assemblages that often combine illustration, texts, diagrams and drawing. 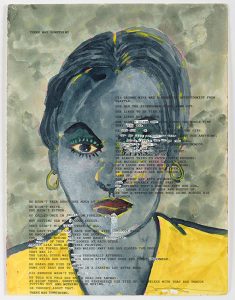 Allen was also never abashed at confronting politics straight on. In Sneaker, 1991, for example, from Allen’s Youth in Asia series, he uses a news story that describes a man’s hatred of the sound of sneakers on the floor because it reminds him of the sound of the guards’ shoes when he was a POW during the war in Viet Nam, as a point of departure. In this assemblage, the text is yellow and stamped into lead. It is presented alongside collaged elements, a framed drawing of an airplane and two actual dress shoes. Allen explains that Youth in Asia is about the “consequences of betrayal — about a culture that betrays its children.” 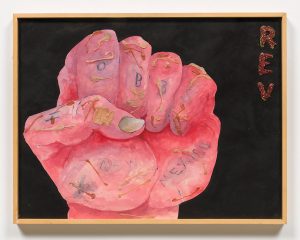 Sonny Boy Chronicles (1998), on view for the first time, is a fourteen-panel work-on-paper, based on one of Allen’s cousins, who was a war veteran and merchant marine. Each piece combines Allen’s loosely drawn and evocative mixed-media illustrations with typed text that expounds on the nuances of Sonny Boy‘s life story. 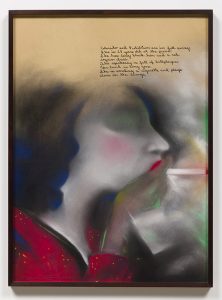 Within the exhibition are songs, remembrances, fragments of dialogue, sculptures and documentation of public art projects, in addition to a fascinating three-channel video installation, MemWars (2016) and related recent drawings (2018-2019) in which Allen and his wife discuss the origins and meaning of many of his songs. Within the darkened room are three projections. In one, Allen’s face and shoulders fill the frame, in the other viewers see those of his wife, Jo Harvey. The third depicts Allen playing the keyboard, his back to the audience while fragments from movies and other source material populate the background illustrating aspects of the song he is playing. MemWars is a straightforward presentation that revolves around a conversation about the meaning and inspiration for much of the work. 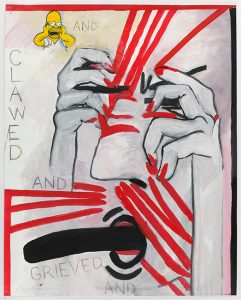 Allen’s exhibition continues up and on the stairs and into L.A. Louver’s Skyroom. The phrase, “Do They Dream Of Hell in Heaven” leads viewers to the second floor where they are introduced to many of Allen’s public art projects and later works, including a series of large-scale drawings (40 x 32 inches) entitled Homer’s Notebook 2, (2019) where Allen uses the character Homer Simpson as a point of departure to explore themes from the Iliad and the Odyssey. Centered in the Skyroom is National Pastime I (91.8.S) – face looks inward with bat, a 1991 bronze bust depicting a businessman whose head has been bashed open with a baseball bat. This work, like many of Allen’s projects, mixes popular culture and news items giving viewers myriad ways to think about and interpret the content Allen presents. 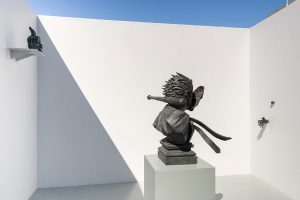 Installation photography: The Exact Moment It Happens in the West

Throughout his career, Allen has drawn from popular culture and the news media, as well as his own experiences, to create thoughtful and complex works that touch on the aftermath of war, personal struggles and demons, and the changes to urban and natural landscapes. Through the presentation of more than 100 works, viewers are taken on a conceptual as well as visual journey through his cutting, engaging and inventive imagination.

Cammie Staros: ‘What Will Have Being’

An Exhibition of Creative AI and Generative Art: ‘Thin as Thorns In These Thoughts in Us’