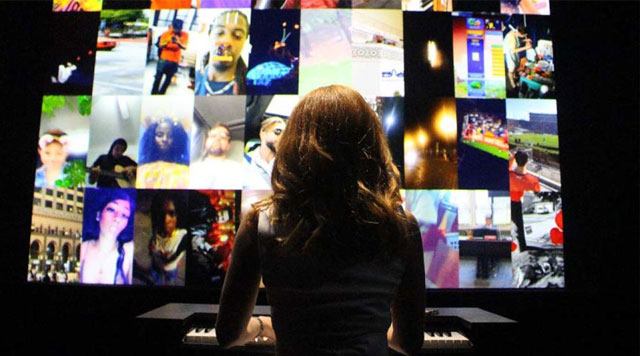 The Los Angeles County Museum of Art (LACMA) in collaboration with Snapchat presents the U.S. premiere of Christian Marclay: Sound Stories, an immersive audiovisual exhibition fusing art and technology. The project, a collaboration between the artist and Snapchat, draws on the sounds and images of everyday life found on the multimedia messaging app Snapchat. Using algorithms created by a team of engineers at Snap Inc., Marclay experimented with millions of publicly posted Snapchat videos to create five immersive audiovisual installations, two of which are interactive. Rooted in a sampling aesthetic fundamental to Marclay’s work, these installations respond to the storytelling available on Snapchat and visitors’ sounds and movements in the gallery space. The LACMA exhibition is curated by Rita Gonzalez, the Terri and Michael Smooke Curator and Department Head of Contemporary Art.

“As an institution that supports artistic innovation and experimentation, we are excited to present the U.S. premiere of Christian Marclay’s new work,” said Michael Govan, LACMA CEO and Wallis Annenberg Director. “In previous works Marclay has already recomposed the material of our media world into his own art; in this case he has absorbed the material of digital media into a work that engages visitors interactively with sound and suggests new possibilities for art intersecting with technology.”

“Christian has built a totally new way to explore the creativity of our community through sound–with unique and surprising results. We can’t wait for LACMA visitors to experience his tremendous work,” said Evan Spiegel, co-founder and Chief Executive Officer at Snap, Inc.

Over the past 35 years, Christian Marclay has explored the fusion of art and audio cultures. Though he studied art and is not a trained musician or composer, Marclay considers sound and musicality integral to his practice. In the 1970s he began using record turntables as musical instruments, creating compositions with loops, skips, and scratches. Since then, he has created musical recordings, prints, sculpture, performances, and video works that incorporate strategies of montage, improvisation, and appropriation. In 2010, Marclay premiered The Clock, a 24-hour single-channel montage constructed out of moments in cinema and television history that depict the passage of time. Acquired by LACMA in 2011, The Clock has become a signature work in the museum’s collection.

Exhibition curator Rita Gonzalez shares that “Marclay, in partnership with Snapchat engineers, has created dynamic new works that responds to the current digital age. Marclay is recognized for exploring audio and visual cultures in his work; LACMA’s The Clock is the perfect example. In Sound Stories, Marclay expands his practice by engaging with social media messages as his raw material, resulting in an audiovisual and experiential performance.”

“Sound is too often ignored and purely incidental on most uploaded videos, image dominates, so I wanted to shift the focus on the sound. Sampling from millions of Snapchats was like having the largest ever collection of LPs to work with. Like a deejay, I started remixing these sounds,” said Christian Marclay.

Sound Stories was on display the Centre d’art La Malmaison in June 2018, as part of the Cannes Lions International Festival of Creativity 2018. The team of engineers who collaborated with the artist includes Andrew Lin, Jarek Lupinski, Eli Semory, and Eran Weissenstern.