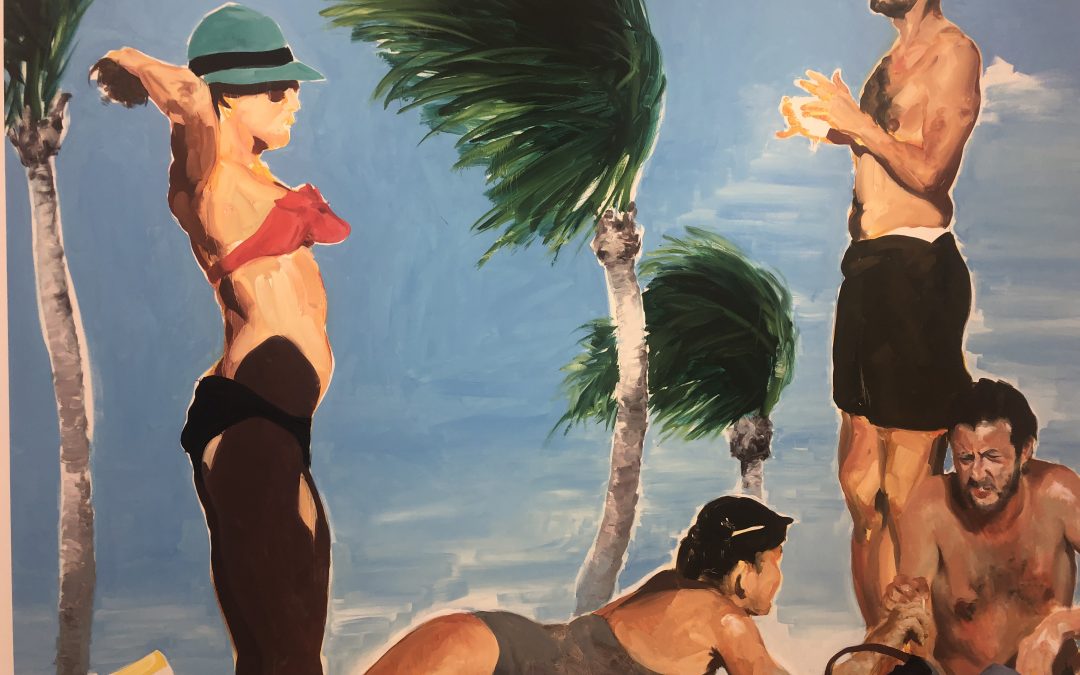 Complications From an Already Unfulfilled Life

Scenes well-suited for summertime decorate the gallery walls: people nude and semi-nude, clad in bathing suits, situated within skies and oceans blue. Water dominates these walls, but these works are not just pretty pictures of attractive people in aquatic paradises – they are charged with a raw, pensive reluctance. This is the latest work of Eric Fischl, known for depicting scenes of American suburban life. 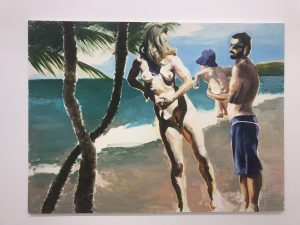 Regarded as “one of the most representative artists of American narrative painting” (HuffPost), whose work has been described as “sexually charged” (Artnet) and exposing “the dark, disturbing undercurrents of American life” (Artsy), Fischl, who is eloquent, politically outspoken and prolific, has worked not only with paint, but also with sculpture, printmaking and words. Indeed, he has written a book called Bad Boy: My Life On and Off the Canvas. 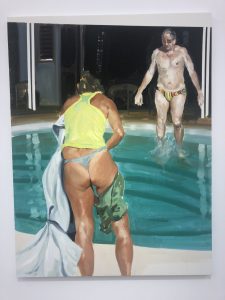 Fischl’s early work is not so far from that which he focuses on now: His early interiors depict nude figures caught off guard, often in domestic spaces or backyards or at the beach. It seems that his work has become more self-aware, with his 2016-17 series, Late America, an outright devotion to depict, analyze and provoke thoughts about American society. 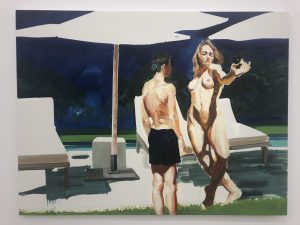 In this solo exhibition, his first in Los Angeles in over two decades, some of his figures are still, whereas others are dancerly, such as “the voluptuous woman snapping a suggestive selfie in The Artist’s Assistant (2018), or the limber couple and baby in Unwinding (2018), who adopt the postures of a modern-day Grecian Laocoön“ (Sprüth Magers). Some figures are clad in casual clothing, others are nude. 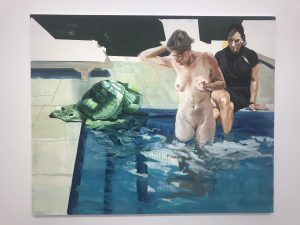 The palpable separation between figures is evoked not only through their stances or attire, but also through Fischl’s brushwork, which emphasizes the apparent emotional detachment between them. Some parts of the paintings seem unfinished: In The Exchange (2018), a man’s facial hair is rendered in detail, but his hands, with which he seems to be communicating, are a quick blur of yellow and brown. 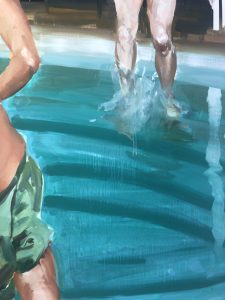 The non-uniformity of his paint application makes Fischl’s paintings the dynamic reflections that they are. In More Things To Come. Promise. (2019), where legs meet water there is a tangle of white, beige and turquoise. In A Surprising Sense of Urgency (2019), a body of water is composed of pockets of white dispersed among ribbons of olive green. In front of this water are two women, one striving to catch up to the other, who appears to have no regard for the person behind her. The Los Angeles Times’ David Pagel writes that, “you feel the vast chasm between physical proximity and intimacy. Fischl is a master at making such interpersonal alienation palpable and poignant.” 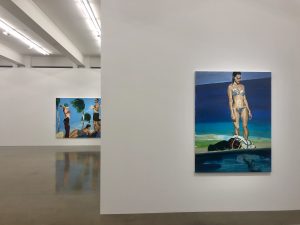 Some questions emerge: Who are these figures that Fischl is rendering? They seem well-to-do and on vacation. They are characters from modern life (Fischl has claimed to work from photos he has taken, then re-mixed, to “best capture” the essence of a moment). What is suggested by the melancholic title, Complications From an Already Unfulfilled Life?

Perhaps it is that “things feel half empty, out of breath and darkly comical, but [possess] a still-attractive synthetic sheen” (Sprüth Magers). This body of work communicates more than meets the eye; the works are truly figurative, exuding a legitimate anxiety embedded within the human experience. 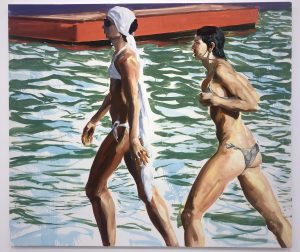 A Surprising Sense of Urgency

Fischl has said about his approach to rendering these figures: “I see their souls and their bodies, the relationship between the inside and the outside. In my opinion, that is the drama of life: navigating that inside-outside relationship.” (HuffPost, interview with Elena Cué, 2017).

Cover image: The Exchange; photos courtesy of the author