Every Picture Tells a Story at Craig Krull Gallery 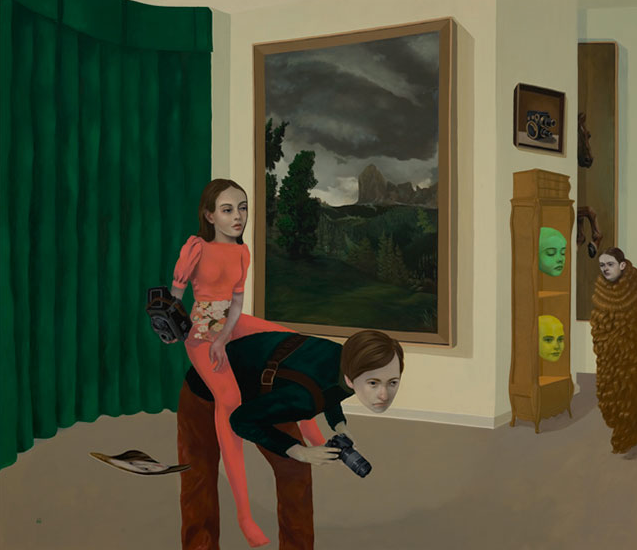 From fires to freeways, earthquakes to race relations, The Day of the Locust to Play It As It Lays, the story of Los Angeles can be sinister, transient, and apocalyptic, but it is also opportunistic, perpetually sunny, and rooted in dreaming. Mythmaking and storytelling are at the core of our creative culture and this impulse drives a number of contemporary painters whose work could be characterized as L.A. Narrative Painting. The exhibition at Craig Krull Gallery will examine the work of a dozen artists from Southern California who use painting to tell a story through images, allegories and symbols.

The telling of stories through the visual arts can be traced back to the beginnings of civilization, but the modern idea was defined during the Renaissance by Leon Battista Alberti in his 1435 treatise “De Pictura,” in which he advises painters to acquaint themselves with poets in order to aid in their constructions of beautifully composed “historia.” Thereafter, large “history” paintings were generally regarded as the highest form of art. The term “narrative art” did not come into use until the 20th Century, by which time, abstraction and other Modernist concerns had pushed this genre of work into the background. However, in recent years artists have begun to utilize a narrative approach as a way to investigate and communicate ideas about gender, race, and politics.

F. Scott Hess acknowledges this long tradition in his painting, The Dream of Art History, in which the artist is engulfed in a giant swirling film strip of famous artworks, while a Cadillac El Dorado crashes through the scene with glaring headlights. James Doolin also employs L.A.’s ubiquitous car, but in his work, Highway Patrol, the viewer is actually behind the wheel, flying high on a freeway overpass with a rifle mounted to the dashboard, heading into the glaring sunset with traffic streaming below. Laura Krifka describes her confrontational, full-frontal female nude, Grab Bag, as a way “to implicate the viewers gaze as a defining moment of the narrative arc…addressing violence, desire and ownership of the body, made at the beginning of the #metoo movement.” In Birds of Paradise, Carl Dobsky pictures the madness and debauchery of a nighttime Mid-Century Modern pool party with drunken flirtations, empty beer bottles and partial nudity, as the entire hillside in the distance is blazing out of control and headed this way. It clearly echoes the painting of Los Angeles being created by the main character in Nathanael West’s The Day of the Locust, in which “he wanted the city to have quite a gala air as it burned, to appear almost gay. And the people who set it on fire would be a holiday crowd.” Muralist Shawn Michael Warren’s contribution to the exhibition addresses the construction of Abbot Kinney’s Venice canals by “black workers who migrated to the west in the early 1900s, and who weren’t allowed to live in Venice after the completion of the canals.”

Over the years, LA artists and writers such as Robert Irwin and Eve Babitz have suggested that Los Angeles is one of the least restrictive towns in the world because it has no tradition, or history, or image of itself. The artists in this exhibition have assumed a different perspective, embracing LA’s stories and what it’s like to live here, in the telling of their own tales.