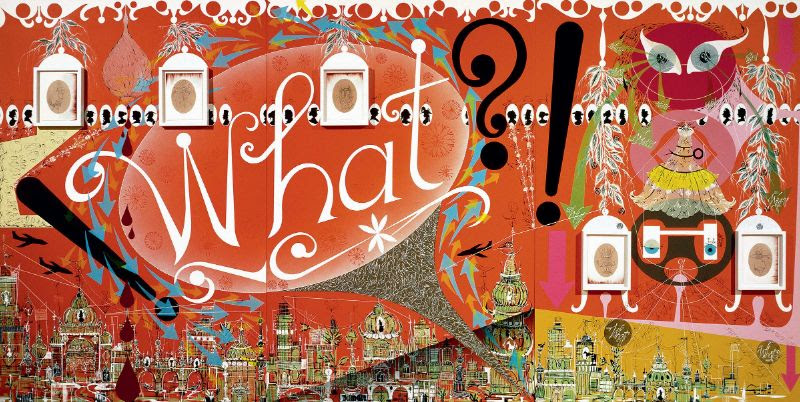 The Hammer Museum‘s new Lari Pittman: Declaration of Independence show is the most comprehensive retrospective to date of the work of American artist Lari Pittman (b. 1952, Los Angeles). A prolific painter and sharp social critic, Pittman has been a strong presence in both the international sphere and the L.A. art community. From his earliest experiments with collage and decoration, to the iconic paintings he produced in response to the AIDS crisis and culture wars of the 1990s, to his more recent mural-scale paintings and symbolic, stylized paintings of textiles paired with portraits, Pittman’s works have remained prescient, incisive, and exquisitely rendered. This exhibition will include approximately 80 paintings and 50 works on paper drawn from the Hammer’s own holdings as well as from many public and private collections throughout the world. On view September 29, 2019 – January 5, 2020, Lari Pittman: Declaration of Independence marks the first time the Hammer Museum has ever devoted all of its major exhibition spaces to a single living artist. Following its presentation at the Hammer, the exhibition will travel to Kistefos Museet in Jevnaker, Norway May 24 – October 5, 2020.

“In addition to being an extraordinary painter, Lari has been an important figure in the Los Angeles art community for the past four decades as both artist and teacher. He has influenced generations of artists as a professor in UCLA’s art department, and is part of a generation of artists who emerged internationally in the 1990s.” said Hammer Director Ann Philbin. “His paintings confront history, politics, violence, and sexuality in a highly aestheticized manner that is both exquisitely painted and deeply responsive to the issues of our time.”

Pittman’s highly detailed works on panel and paper—grand tales about love, sex, death, art, and citizenship—feature a rich visual language that he has developed over the course of his career, replete with owls, Victorian silhouettes, flying text, and exaggerated and sexualized bodies. These meticulously crafted works have become emblematic of a generation of queer artists who reclaimed ornamentation and lush detail during the 1980s, employing them as part of their political and personal iconography. At the same time Pittman shared the noirish sensibilities of many of his Los Angeles-based, artist peers whose influences included that era’s thriving punk rock scene and the legendary Feminist Art Program at CalArts. In 1992 his work was featured in the critically acclaimed MOCA exhibition Helter Skelter: L.A. Art in the 1990s, along with that of Mike Kelley, Liz Larner, Raymond Pettibon, Jim Shaw, and others. Pittman’s blend of densely painted surfaces and codified references to sexuality and other charged topics, such as the history of racial violence in the United States, aligned his works with the discourse surrounding the contested body in the early 1990s.

In recent years Pittman has moved inward, depicting memories, subjects related to his own extensive history as a collector of Mexican craft and artifacts, and a diverse range of artistic influences. These paintings function as rich dreamscapes and provide insight into the artist’s psyche. Key figures from art history are juxtaposed with references to the artist’s own studio production—represented as birds, babies, vulvas, thought bubbles, and other points of origin. His painted surfaces have become smoother, accentuating the synthetic quality of the works and showcasing the artist’s mastery of the medium. Among these recent works on view will be Pittman’s cycle of mural-scale paintings titled Flying Carpets (2013).

Pittman generally works alone in the studio and has described painting as a physical activity that involves his entire body. His paintings are created without preliminary sketches, and their large scale mirrors the outsized, complex, and even mythic ideas that inform them. In contrast, his works on paper are more intimate and graphic, featuring fewer objects and a more pronounced flattening of illusionistic space. The drawings offer a quieter counterbalance to his paintings. Also on view are the artist’s recent books, with feature unique paintings on paper.

A selection of drawings spanning Pittman’s career will comprise Orangerie, a stand-alone installation that provides an intimate space for viewing his works on paper. Updated to include new drawings up to the present, Orangerie showcases his lushly colored and decorated drawings on walls covered in painted trellis designs.

This exhibition surveys more than thirty years of work and is organized chronologically, highlighting several bodies of work in depth as well as featuring the artist’s monumental, mural-size paintings.