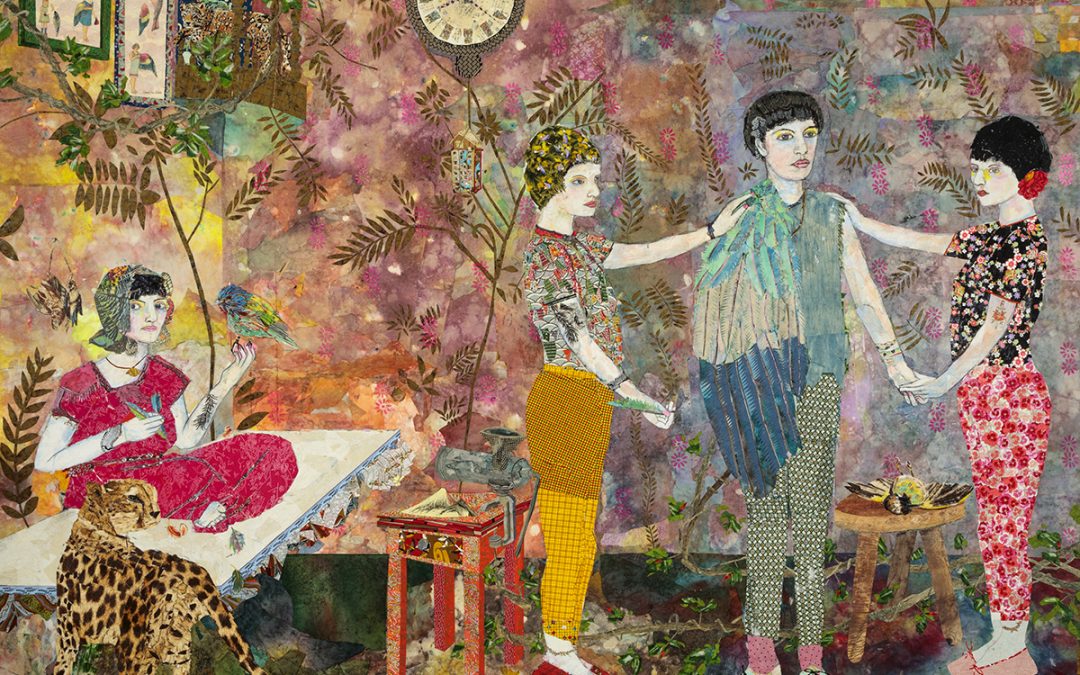 Raised in Colombia and based in Brooklyn, artist María Berrío is creating works layered in both their materiality and in their meaning. Calling to mind the raw intensity of Egon Schiele and the colors and patterns of Klimt, her pieces are familiar, though entirely her own. 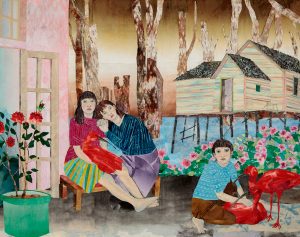 The characters in A Cloud’s Roots (2018) seem to exist neither here nor there, an impression brought about by the color and composition of their surroundings. Subjects in Berrío’s works appear amid backgrounds that are hazy; brownish-bluish skies deny any confirmation of inside or outside, daytime or nighttime. These characters seem to exist in a realm of their own. The way Berrío physically crafts her works adds another dimension: She uses layers of Japanese paper to patch together her collages, utilizing a historical and traditional method in conjunction with other modern painterly methods. 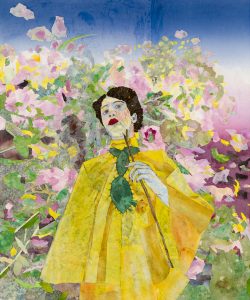 A Universe of One (2018) features a lone figure positioned against a background of lush flowers, gazing intently at the viewer, the figure’s neck ringed by a cactus. Such natural motifs recur throughout the show, as the resilience of these elements within changing environments symbolize Berrio’s subjects, who are, mainly, immigrants.In a walk-through with Interview magazine, Berrío pointed out that in A Cloud’s Roots, the tree is a “symbol of survival and resilience, able to thrive even in the most unlikely environments.” 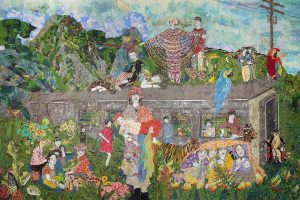 In Anemochory (2019), this symbolism continues, with Berrío stating, “without any agency or control, the seeds rely on favorable conditions to take them to hospitable places. It’s not up to them where they are going. The women in the collage are also without control.”In the phantasmagoricalThe Dream of Flight (2019), red birds flying overhead symbolize freedom. 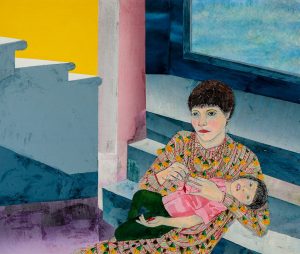 Most often in these works, the characters appear in twos. According to the backgrounds, which sometimes feature beds, these duos could be siblings or parents with their children. The latter is the case with Genipa (2019), a piece featuring a mother and her son, created with real-world family separation in mind. 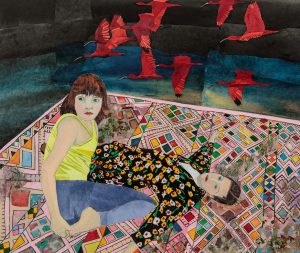 Notably, most of Berrío’s characters are women. The artist has commented on her desire to show the power that women hold, no matter the circumstances with which they are confronted. She has said, as women, “we are mothers, we are sisters, we’re friends. We are everything.“ The women she features are, as the press release states, “pensive yet confident figures amid a scene of visual exuberance.” 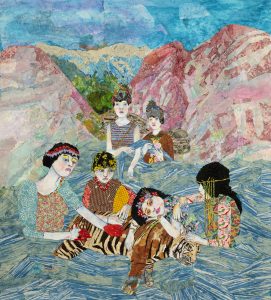 As visually exuberant as the work is, it is also socially conscious, undeniably feminist and somewhat political. That said, María Berrío’s work is at the forefront of many large concepts, but it is, also, deeply personal: influenced heavily by her childhood, and thus inherently, by her experience as a Colombian immigrant. “A lot of my work is autobiographical” she has said. By crafting these collages, Berrio weaves together many of her own experiences, but beyond that, she is creating a visual representation of a larger frame of experience – that of those who resiliently exist and flourish despite conditions in constant flux and whose identities are intersectional and whose stories have long been greatly underrepresented.