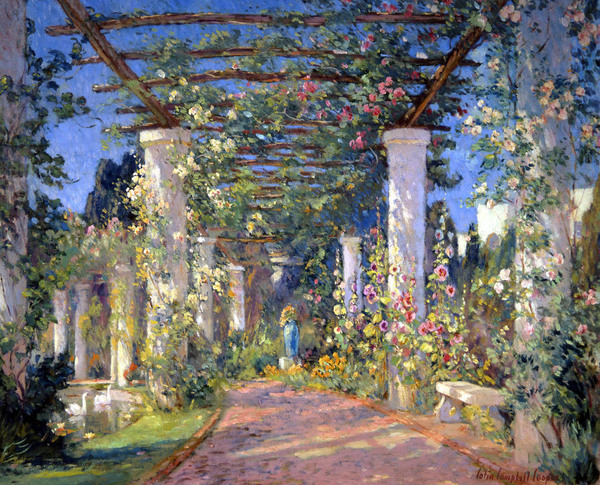 — “Painting is silent poetry, and poetry is painting that speaks.”

These words were written by the Greek biographer and essayist Plutarch (46-120 AD) nearly two thousand years ago.  By definition, all the arts are sensual, meaning that they are pleasing to one or more of the five senses: vision, hearing, taste, smell and touch.  While poetry can be read or spoken, paintings are uniquely accessed through our sense of vision. The UCI Institute and Museum for California Art (UCI IMCA)‘s exhibition “Poems Without Words” includes a fine selection of poetic, early California artworks, though August 10, 2019.

The French poet and art critic Charles Baudelaire (1821-1867) wrote: Dancing is poetry with arms and legs.  In that spirit, one would be tempted to paraphrase him and say: Painting is poetry with paint and brushes.

One lead image in the exhibition is a wonderful Impressionist work titled Pergola at Samarkand, painted in Santa Barbara in 1921 by Colin Campbell Cooper (1856-1937).  The Samarkand Persian Hotel was built in 1920 to capitalize on the growing tourist trade.  It was one of the most luxurious hotels on the west coast but was forced to close at the height of the Depression, in 1937, due to the lack of patrons.

California has always been noted for its blossoms.  This is reflected in the large number of landscape paintings that feature wildflowers.  As it was uniquely associated with California, and indeed is the official state flower, the Golden Poppy is shown in numerous paintings.  Most often, it appears in paintings of springtime, spread as a bright orange carpet across the hills.

California Landscape, 1912, by Granville Redmond (1871-1935) shows several varieties of wildflowers accompanied by majestic oak trees.  Cherry Trees in flower are celebrated in Springtime, Banning, painted by Anna Hills (1882-1930) in 1916.  She shows a group of vivid flowering trees set against the snowy slopes of Mt. San Jacinto, in Banning, at the time a cattle and agriculture community located near Palm Springs.

If Macaw and Cockatoos, painted by Jessie Arms Botke (1883-1971) in 1926, were a poem, it would have a jarring tone accented by the loud discourse between the macaw and one of the cockatoos.  The poem would exhibit a colorful rhythm provided by the vivid colors of the lavender blue wisteria, complemented by the rich gold leaf in the background.