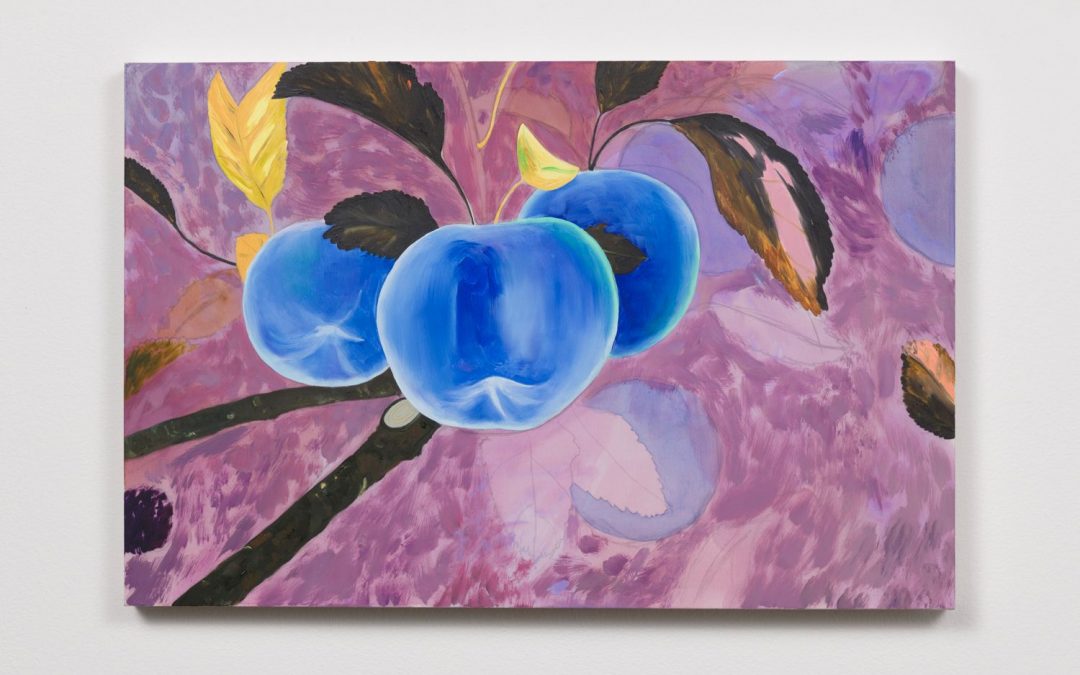 In his fourth solo exhibition at the Night Gallery, Chicago-based artist Paul Heyer presents a collection of new paintings (all works 2019), focused on transience and visualizing – for lack of better words – the complicated. 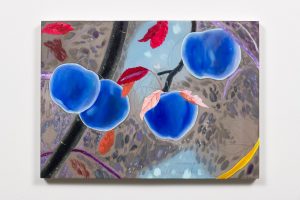 The Artist, like most of the paintings in the show, is composed of oil and acrylic on polyester. The subject is a skeleton, but the feeling it conveys is far from eerie. This is due, in part, to the skeleton’s dancerly position, as well as to the bright green accents of color on and behind the form. Indeed, skeletons appear throughout the works, including in Hi, in which the bony figure is depicted crawling before a yellow butterfly. 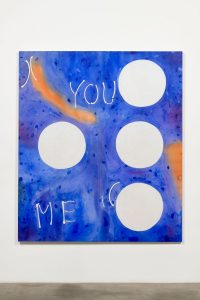 Nature is abundant in the world of Blue Boy, but with Cottonwood and Apples in August, by no means making Heyer’s paintings works of sheer realism. In Broom Growing, for example, the head of a broom grows out of a tree branch, with white glitter circles atop the canvas. This nonsensicality, this marriage between the “real” world and a playful, more fantastical one, is what characterizes the atmosphere set forth in the artist’s new works. 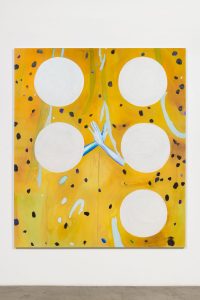 Thenewmasters.art describes this dichotomy as, “the mellow tug-of-war between incompatibles: the persistent spirit somehow animating skeletons; oneself metamorphosed into a lamppost; glittering, otherworldly circles floating on the painting’s surface. Painlessly, we have left the path of reason, entertaining contradictions in the playpen of a mood.” 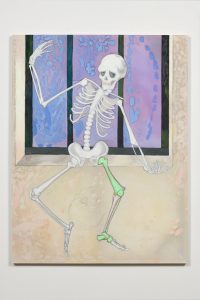 These contradictions are present not only in the motifs featured, but also by the way in which they are rendered. Heyer works with a combination of both acrylic and oil, two very different mediums that result in images with stretches of canvas that are at once candescent and bright, but fluid while at the same time appearing flat. The painterly qualities of these pieces is also coupled with what appear to be sketches made of graphite. 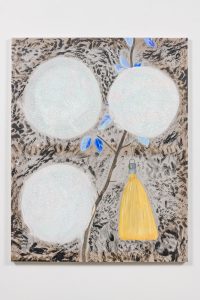 There is, under the skeleton in The Artist, a vague sketch of a skeleton head, upside down. In Hi, there is a shadow of a sketch, a third skeletal arm, although it is unclear whether these were done before or after the paint was applied. While the paintings seem complete, these sketchy suggestions offer a dynamic back-and-forth between the incomplete and the realized. The dots and strokes of paint in the paintings’ backgrounds offer a similar effect, making scenes of ordinary light posts more abstract, paintings of fruit more absurd. 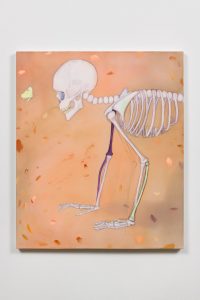 And there is the fitting environment in which the paintings are situated: The skeletons within the works speak to the gallery’s own ceiling structure, which is covered in white beams (and, in combination with the other show at Night Gallery – Jin Shan’s anatomically experimental Hall of Mirrors – make for a more or less cohesive and well-curated setup). 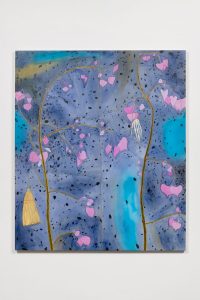 Though playful, Heyer’s paintings pose questions about human relationships: You and Me and Becoming both do this, the former through the literal words “YOU” and “ME” floating on the canvas; the latter through two blue hands, meeting, but barely touching. 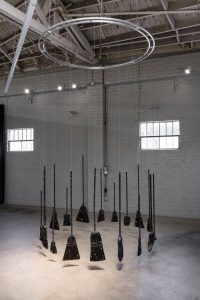 The gallery writes, that like the Gainsborough for which the exhibition is named, this body of works is about the nature of transformation and “a mischievous but earnest ode to the transformative power of the imagination and the instant of becoming”. With visual cues pertaining to the natural and the domestic, to life and to death, to the abstract and the real, Blue Boy offers a complicated look at the human experience through atypical and shifting perspectives.

Cover image: Summer; all images courtesy of the author