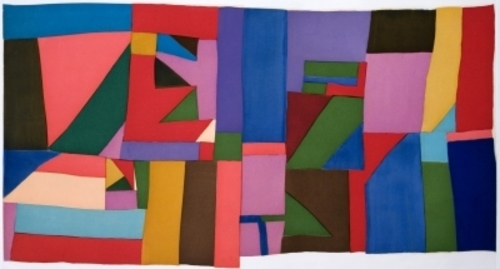 The Art Collectors’ Council of The Huntington Library, Art Collections, and Botanical Gardens funded the purchase of several notable American works at its annual meeting last month, signaling a commitment to grow and diversify The Huntington’s holdings of works by modern and contemporary artists while continuing to build its collection of historical art. The Huntington acquired a group of 32 colorful etchings made between 2005 and 2014 by four artists—Louisiana Bendolph, Mary Lee Bendolph, Loretta Bennett, and Loretta Pettway—who are part of the Gee’s Bend group of quilters. Also acquired was a collage, Blue Monday (1969), made by celebrated African American artist Romare Bearden at the height of his career. Two paintings (1910-1916) from the seminal Weehawken Sequence by John Marin of Alfred Stieglitz‘s circle, as well as a rare Tiffany chair (1891-93) rounded out the acquisitions.

“Any one of these artworks would have been a meaningful addition to the American art collection,” said Christina Nielsen, Hannah and Russel Kully Director of the Art Collections, “but the addition of the group of prints by the extraordinary Gee’s Bend group, along with the magnificent Bearden collage, allow us to incorporate more voices into the story of American art, and are therefore especially significant. This year, the Collectors’ Council really stepped forward to further fill a gap and expand the narrative.” The new acquisitions will go on view in the Virginia Steele Scott Galleries of American Art over the coming months.

In 2002, about 40 little-known quilt makers, all African American, from the hamlet of Gee’s Bend, Alabama, took center stage in the art world thanks to an exhibition at the Whitney Museum of American Art. Their original art making, with no intentional connection to modernist abstraction—though often compared to it—received rave reviews from art critics and charmed the nation as news and films that highlighted their unique work spread. In 2005, Paulson Fontaine Press, a fine art print studio in Berkeley, California, invited Mary Lee Bendolph, her daughter in-law Louisiana Bendolph, Loretta Bennett, Loretta Pettway, and two additional artists from Gee’s Bend, Alabama to collaborate on a print series. After conversation with the printers at the press, the artists landed on a soft-ground etching technique in which small quilts were pressed onto a wax-coated plate. This captured the seams, fabric weave, and the wear typical of Gee’s Bend quilts.

The 32 works by Bennett, Pettway, and the Bendolphs that were acquired by The Huntington will enrich the collection, said James Glisson, interim chief curator of American art. “These are fantastic prints, boldly colored, and striking in design. In the prints, the artists’ captured the effects of denim and cloth worn from washing and years of use, but juxtapose those with dazzling colors. This push and pull between new and old, bright and faded makes them evoke age and wear but in a happy, buoyant way.”  The Gee’s Bend etchings build on The Huntington’s strong collection of 20th century prints as well as add the works of four contemporary artists to the collection.