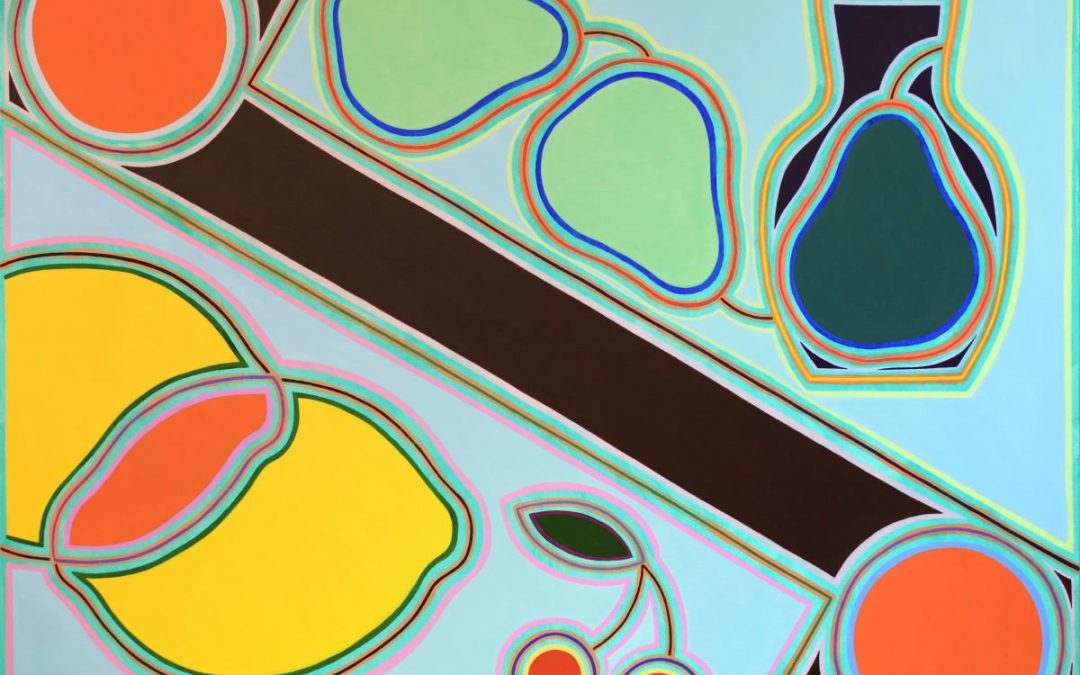 Holly Coulis paints shapes in soft muted colors. These shapes represent organic and inorganic things, often what might be found in a domestic space like a kitchen. Within her abstract compositions, it is possible to discern a table and various types of fruit: cherries, lemons, oranges, grapes. 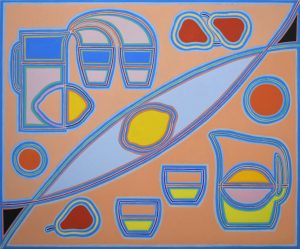 Each work is titled after what is depicted. Lemonade and Smoke (all works 2019), for example, is a painting of a table seen from above and the side simultaneously. The table’s surface is light blue in tone. On the table sits a lit cigarette whose smoke billows to the top of the composition. Next to the cigarette are a pitcher and a glass. The pitcher is in the processof  pouring a yellow shape that has yet to fill the glass. A few yellow lemons are on the right side of the composition. Five circles— oranges— form an arc in the center of the painting. Though based on the representational, Coulis’ works are abstract. 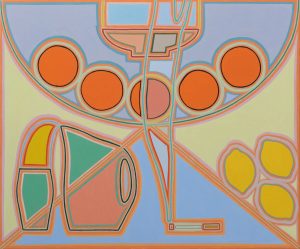 Coulis’ style has been to create a colored shape, then outline it in another color and then outline it again and again in different tones. Her outlines eventually link multiple shapes and dictate the flow of the composition. 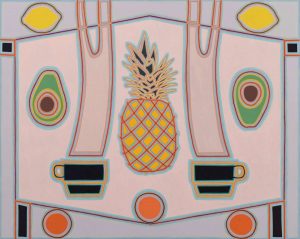 Pineapple and Coffees pictures two cups of steaming hot coffee on a light pink table. In the center of the table and the composition is a pineapple with lemons and oranges at the edges. Two green avocado halves also sit on the table. These items are painted as flat colorful shapes, arranged to become a beautiful still life. 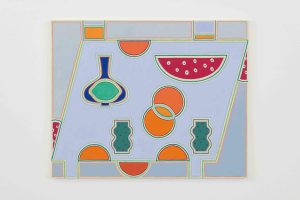 While Coulis’ paintings play with perspective and simultaneity they are less Cubist than Pop, sharing affinities with still lifes by Stuart Davis and Roy Lichtenstein. In her compelling works, each table becomes a stage upon which quasi-narratives in the form of interactions between geometric shapes are played out. In Larger and Hotdogs, orange-red rectangles with rounded edges become bun-less hot dogs. They are joined by two overlapping beer glasses filled with yellow, except for where they intersect. 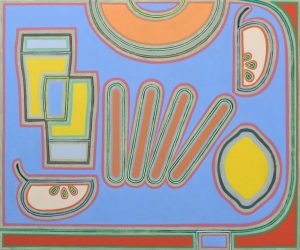 Here, Coulis painted a blue rectangle — the color of the table below. Apple wedges and a lemon also sit on the table. The table fills most of the composition, leaving a small red border that represents the ground or floor below. One Eggplant, Two Turnips depicts a corner where two light green tables intersect. On one table is an eggplant, on the other, the two turnips. Intersecting rectangles create interlocking geometric shapes that Coulis paints and outlines in different shades of green and orange. 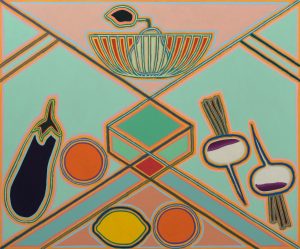 Coulis’ paintings hedge more toward the realm of geometric abstraction than traditional still life while evoking an aspect of play. They are imagined set ups of utilitarian objects and food, seen from various angles and points of view to maximize formal relationships. These works, though seemingly simple, are complex and well-choreographed arrangements that use color, line and form. 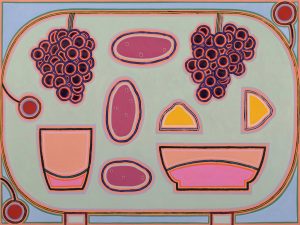 Potatoes, Grapes and a Lemon