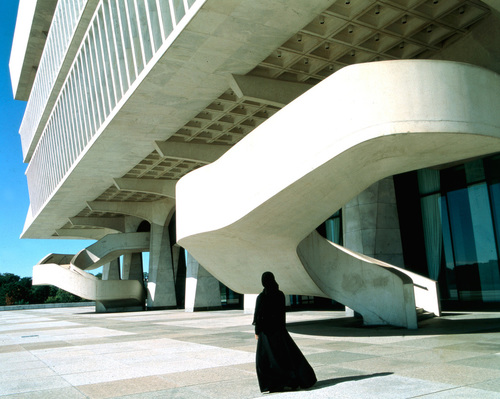 The Broad will present Shirin Neshat: I Will Greet the Sun Again opening October 19, 2019. The exhibition surveys 25 years of Neshat’s dynamic video works and photography, investigating the artist’s passionate engagement with ancient and recent Iranian history, the 3 experience of living in exile, and the human impact of political revolution. Taking its name from a poem by poet Forugh Farrokhzad, it is accompanied by a full-color catalog that includes essays by exhibition curator Ed Schad and leading scholars and artists working in Iranian culture, photography and film.

Joanne Heyler, founding director and chief curator, The Broad said, “Our fall 2019 exhibition will present, for the first time in Los Angeles, a survey of the work of Iranian American artist Shirin Neshat. In the late 1990s, the Broad collection began a long engagement with the artist’s work with the acquisition of her twin-screen, immersive video piece Rapture (1999). It added her captivating voice to the collection’s emphasis on artists responding to global culture and politics. Neshat’s stark and powerful work in photography, film and video addresses issues around migration and exile as well as the West’s preconceptions about Islamic culture. We are excited to be working alongside the artist in developing one of the most relevant and poignant surveys to date of her work.”

Neshat left Iran when she was 17 years old to complete her studies at the University of California at Berkeley, after residing initially in Los Angeles. Due to the turbulence of the Islamic Revolution (1978-79) and the Iran-Iraq war (1980-88), Neshat continued to live outside of her home country. She first gained renown for her iconic 1990s photographic work Women of Allah, as well as immersive videos such as Rapture (1999) and Possessed (2001) (both now in the Broad collection). Neshat completed her first feature film, Women without Men, in 2009, and recently debuted a new feature film, Looking for Oum Kulthum, in 2018.

The exhibition connects Neshat’s early work — centered on the experiences of Muslim women as a mirror for Iran and Iranians living in exile — to acclaimed recent projects never-before-seen in American museums. Dreamers, the artist’s first examination of American society, will feature prominently.

Influenced by the Surrealist films of Man Ray and Maya Deren, these photographs and videos examine the lives of outsiders and exiles from other countries who navigate their personal identities in the United States through a divided sense of culture and shifting sense of home.

“It is my tremendous honor to be invited to hold one of the largest exhibitions of my past and most recent work at The Broad,” said Neshat. “Not only do I feel privileged to be among the roster of amazing and iconic artists whom The Broad has thus far presented in major solo surveys, but I’m also extremely excited by the opportunity of seeing my work finally be brought to the city of Los Angeles, with its diverse population including the largest Iranian community living outside of Iran.”