Mel Bochner
A Deep Dive Into the Possible 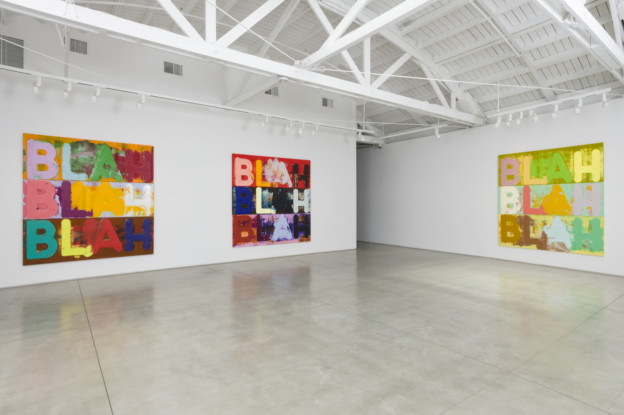 ‘Blah,’ according to the dictionary, is defined as dull or unexciting, something without meaningful content. Used in a sentence, it might read “this game has been very blah.” Blah can also be used to substitute for actual works, that are otherwise unimportant, appearing as blah, blah, blah, in text or conversation. For Mel Bochner, the repetition of these words is “an expulsion of breath which can mean anything, everything or nothing.” 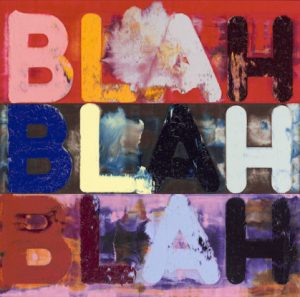 In the main gallery space, Bochner presents six versions of Blah Blah Blah (all 2018). These 88 1/2 x 89 1/2 inch oil on velvet paintings each contain the word Blah stenciled three times, in multiple colors filling most of the surface of the work. The application of paint is messy, drippy and uneven. The use of velvet is ironic, as velvet paintings usually connote a kind of kitsch. The words could be seen as an emblem of the ongoing malaise that has swept over the country – a state of ennui within the political climate where some form of “blah blah blah” is disseminated daily. 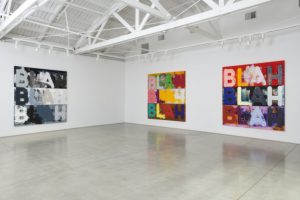 Yet, in the back room, there is laughter. Here, Bochner presents three screen prints entitled HA, HA, HA (all 2017). In varying consistencies, the word “HA” is screened in white numerous times atop a deep blue/black ground. The phrase “language is not transparent” is stenciled in black, becoming a hard-to-read layer between the dark background and the white lettering. 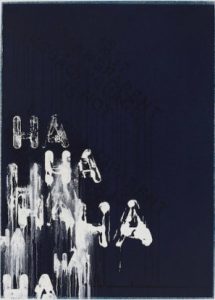 Bochner creates conceptual paintings based on systems. These works exist within a continuum that began in the 1960s when his work was more reductive and minimal. They have followed a rigorous trajectory from then to now. Early works from the 1960s and 1970s explored information, language and measurement, as well as the complex geometry of simple shapes. Over time, his works morphed from strictly analytical to an exploration of painted surfaces, although his fundamental concerns remained the same. His inquiries into language and language as a system led to his bright colored Thesaurus paintings where he’d fill the space across the canvases with synonyms for carefully chosen words. A work such as Contempt (2004) reads in part: contempt, spite, malice, loathing …. hate your guts, on your shit-list, go fuck yourself. 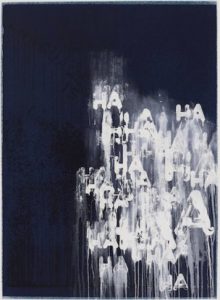 The Thesaurus and Blah paintings are related as one expands upon language, while the other reduces it to a single phrase that signs for both nothing and everything. On an aesthetic level, Bochner’s works are both controlled and spontaneous. While the six Blah Blah Blah paintings all follow the same process of creation, they are also significantly different, just as each utterance of language that purports to communicate the same thing is discretely nuanced. In one, a pink B is followed by a blue L, a green A and a red H. These letters float over a textured application of orange, green and red. In the next row, the B is a darker pink, the L is a plumb color, the A is an orange yellow and the H is close to white. The third row of letters sits atop a brownish background and consists of a deep green B, a yellow L, a red A and a blue-purple H. 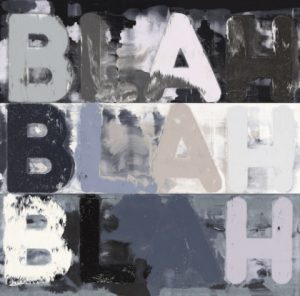 Though known as a conceptual artist, Bochner is a skilled and seasoned painter and is hyper-conscious of the relationship between colors, textures and varying applications of paint. Although the letters are stenciled onto the surfaces, no two appear the same. How they interact with the ground and each other gives these paintings their luscious individuality. Though at first glance, Blah and HA might seem pat and obvious, Bochner continues to surprise as he delves deeper and deeper into what is possible within finite parameters. 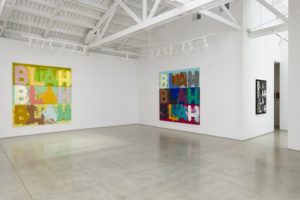