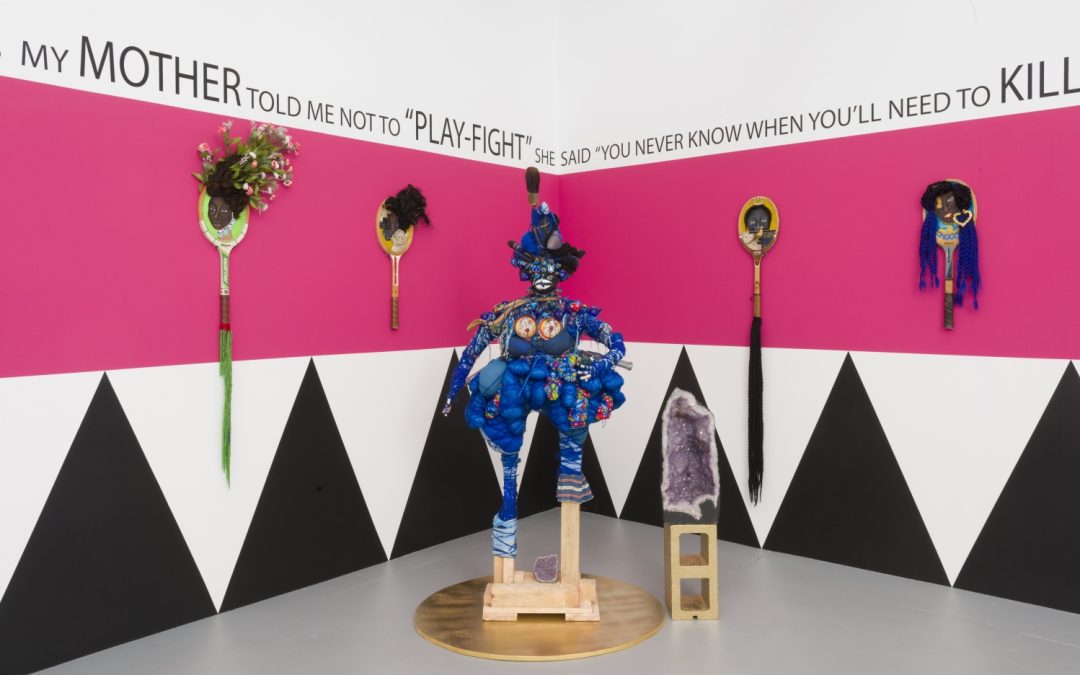 Vanessa German is a Los Angeles-raised, now Pittsburgh-based artist, poet and community activist. Though self-taught, her work is extremely savvy with just the right blend of artistic and political considerations. Her visually engaging and thought provoking installation $lang: Short Language in Soul consists of five large-scale figurative assemblages that German refers to as “Power Figures” or “Tar Babies” and fifteen mixed media portraits made from vintage tennis rackets. They are presented on walls decorated with pink, black and white geometric graphics. 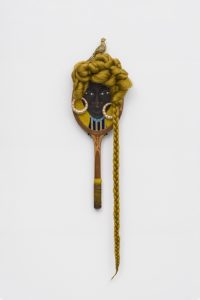 Although German’s works share affinities with Alison and Betye Saar, as well as with Nick Cave as all of these artists create elaborate sculptures with found materials that examine the African diaspora, black identity, race and power, German also examines folk arts’ relationship to spirituality in addition to drawing from personal experiences and observations. 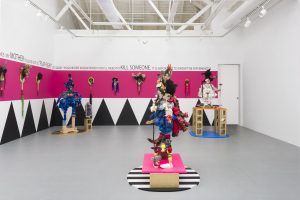 A wide band painted a deep pink encircles the gallery walls like a frieze. Between this stripe and the floor is a symmetrical pattern made of black and white triangles. Above the pink band in capital letters reads the following: BEEN HERE THE WHOLE TIME. I. WASN’T WAITING FOR YOU TO______ ME BEFORE I COULD _________ MYSELF; I HAVE BEEN HERE THE WHOLE TIME. YES MY MOTHER TOLD ME NOT TO “PLAY-FIGHT” SHE SAID “YOU NEVER KNOW WHEN YOU’LL NEED TO KILL SOMEONE. IT IS IMPORTANT TO KNOW THE DIFFERENCE.” Though not a caption, per se, this text, written by German, does function as a rubric that directs the interpretation of the work.

Evenly spaced below the words and within the painted pink band is a series of altered tennis rackets. With their long shafts and rounded frames, these rackets serve as stand-ins for the human body. German has covered the strings, using this space for the heads. Each portrait is titled after the model of the racket (now rendered useless by German’s additions). Valient (all works 2019), for example, is an old wooden Wilson racket with white paint and minimal decoration. It becomes the support for a portrait of a young black woman who stares out intently from the center. Braided black hair surrounds her face and also hangs from the grip down toward the gallery floor. Covering part of her forehead is a large red heart. Blood drips alongside her nose from this incongruously placed body part. 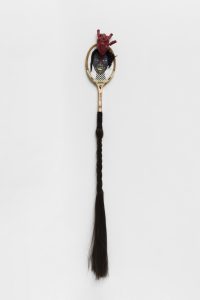 Special depicts a woman with dangling hoop earrings and large folds of golden hair that cascade from the top of her head in a long braid down the side of her face. A golden bird nests in her hair, sitting calmly atop her curls. Stylist is more elaborate. Here, German covers the racket head with glitter and beads that partially obscure the woman’s facial features. Her thick black hair is entangled with a tree branch that crowns her head, extending in various directions. 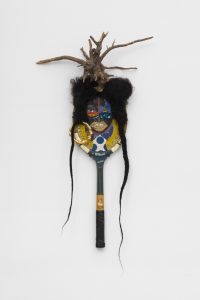 German’s tennis racket portraits are a curious array of women, displaying a range of imagined personalities. It is difficult not to reference German’s use of tennis rackets in relation to the success of African American athletes like Venus and Serena Williams, seeing them as symbols of hope and possibility. 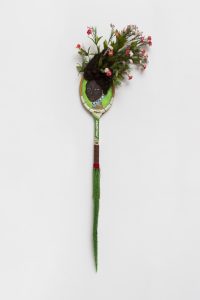 German’s figurative assemblages are sculptures modeled on traditional Congolese Nkisi Power Figures— protectors that fend off evil spirits and punish wrongdoers. These “Tar Babies,” as she refers to them, stand on skateboards mounted on top of concrete blocks. The figures, no more than four feet tall, are created from found materials including bound fabric, thread and shells. Electric and Verbose, rises from a blue base that also extends up the wall like an archway. The head has a mask-like face with one missing eye. The other eye and mouth are made from large cowry shells. The body is a melange of beaded knick-knacks, colored top-like ornaments, and wrapped fabric with floral patterns that becomes the figure’s dress. A hand with glittered as well as blue fingernails extends from the top of her head. 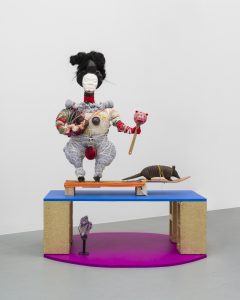 A Physical History of Grace

The figure in A Physical History of Grace holds a small ‘white’ infant doll in one arm and a stick with a pig’s head in the other. A white painted mask serves as her head, which is surrounded by tufts of dark hair. Two ceramic breasts extend from the center of her body which is otherwise clothed in striped and patterned fabrics all bound with white string. A large red light hangs between her legs and a wooden armadillo rests on a skateboard to her left. On her back she wears a sign that reads “no admittance.” 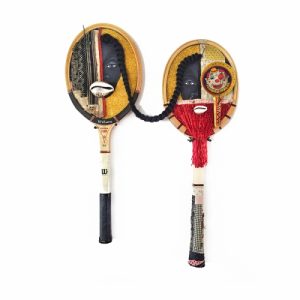 Together the figures become a tribe of women. Although made from discarded material, they are colorful and assertive, standing strong to ward off the evils of contemporary society. German’s powerful works are modern day deities created from the refuse of everyday life. 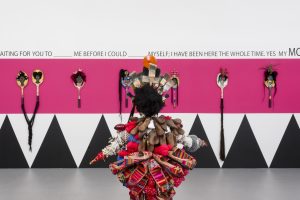