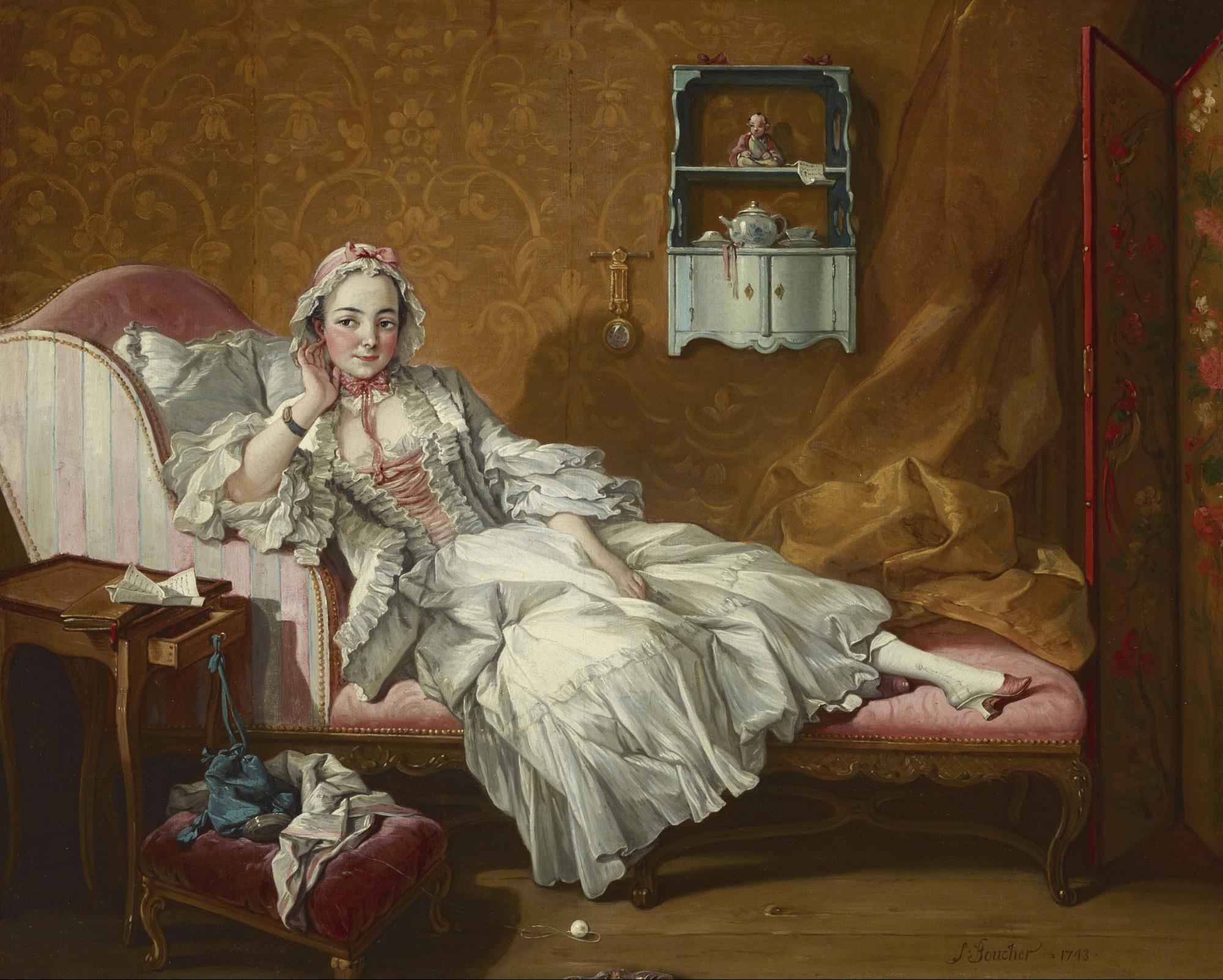 The Norton Simon Museum announces a special installation of three 18th-century French genre paintings from The Frick Collection in New York, part of an ongoing reciprocal exchange program. These artfully constructed visions of contemporary life and fashion, as depicted by François Boucher, Jean-Baptiste Siméon Chardin and Jean-Baptiste Greuze, provide viewers with an intimate look at the lives of middle-class French women of the 1740s and 1750s. The paintings will be installed in the Museum’s 18th-century Rococo gallery among its own works by Chardin and Boucher, as well as paintings by Jean-Antoine Watteau and Jean-Honoré Fragonard. This installation marks the first time that the Boucher and Chardin paintings have been to California and that the three have been on loan together in this manner.

Jules and Edmond de Goncourt, the eminent 19th-century historians of French art and society, baptized the 1700s the “century of women.” Though 18th-century women did make strides in the sciences, literature and the arts, they were most often portrayed in genre scenes as we see them here: pursuing leisurely, quotidian pleasures and tasks. The very nature of genre paintings—recognizable scenes removed from specific identities and places—made works such as these highly collectible in the burgeoning art market. In somewhat of a departure from the idyllic or erotic nature of other genre scenes by these same artists, their compatriots and followers, these three elegant paintings from the Frick should be viewed for what they represent, without attempting to encumber them with moral messages or even simple narratives. While scholars, dealers and collectors have made efforts to identify the sitters in these paintings, the works were most certainly not meant as recognizable portraits.

Boucher’s Lady on Her Day Bed, 1743
François Boucher (French, 1703–1770) was a leading artist of the Rococo style, known for his sumptuous portraits and classical scenes. A Lady on Her Day Bed, the first of three versions, depicts a woman of some status reclining in a pink-and-white taffeta dress and matching mules, one of them extending saucily from beneath her gown. She is surrounded by an array of linens, a wayward ball of yarn, a lacquered screen, an opened letter, and a variety of objects that sit on the little cupboard against the brocade wall. Boucher was a collector of shells and porcelains from East Asia, and his love for these objects, shown here on the shelf, is reflected in the list of household effects compiled after his death. This picture owes its charm to its insouciant sitter, long thought to be Boucher’s wife, Marie-Jeanne Buzeau. That myth was dispelled at least two decades ago. The identity of the model in her untidy chamber remains a mystery.

Chardin’s Lady with a Bird-Organ, 1753 (?)
Jean-Siméon Chardin (French, 1699−1779), known for his still-life paintings, focused for about 15 years of his career on genre subjects like the Frick’s beautiful Lady with a Bird-Organ. He repeated this scene in at least two versions, now at the Louvre and the David Owsley Museum of Art at Ball State University in Muncie, Indiana. The composition would be the last genre scene painted by Chardin, who returned to painting still life for the remainder of his career (with the exception of some pastel portraits). The painter Charles-Antoine Coypel helped him obtain this, his first royal commission (and the highest amount he ever received for a painting). Perhaps as a note of thanks, in the shadows of the back wall in all three versions, Chardin re-creates a print by Bernard-François Lépicié after Coypel’s painting of Thalia (the muse of comedy and lyric poetry) being rejected by Painting. In this quiet interior, the artist probably employed as his model his second wife, Françoise-Marguerite Pouget, to depict a typical middle-class lady who stops her embroidery to teach a caged bird specific melodies using a hand-cranked organ.

Greuze’s Wool Winder, ca. 1759
Jean-Baptiste Greuze (French, 1725−1805) was renowned for his portraits and genre paintings. In this painting, a young wool winder carries on with her work despite the distraction and entreaties of a nearby cat. The only hint at her identity is seen on the chair she sits upon, where the initial “B” is carved into its top slat. Perhaps this is in recognition of the artist’s wife’s family name, Babuti (or might it stand for the first owner of the painting, the Marquis de Bandol?). Greuze painted several portraits of members of his wife’s family, shown at the Salons of 1759 and 1761. This sweet rendering of The Wool Winder from around 1759 was thought to have been modeled by his wife, Anne-Gabrielle Babuti, although it is now believed to be Anne-Gabrielle’s sister. Whoever the sitter was, this genuinely fresh and pure depiction of a young servant serves to suggest the disparity between the real and the imagined, the biographical portrait and the gauziness of genre painting.

This generous loan from the Frick Collection will be installed in the Norton Simon Museum’s 18th-century galleries among related works from its permanent collection. This installation is organized by Senior Curator Carol Togneri with Curator Gloria Williams Sander and will include a series of special events.