Alexandra Bell: ‘Counternarratives’
Questioning How A News Story Is Framed 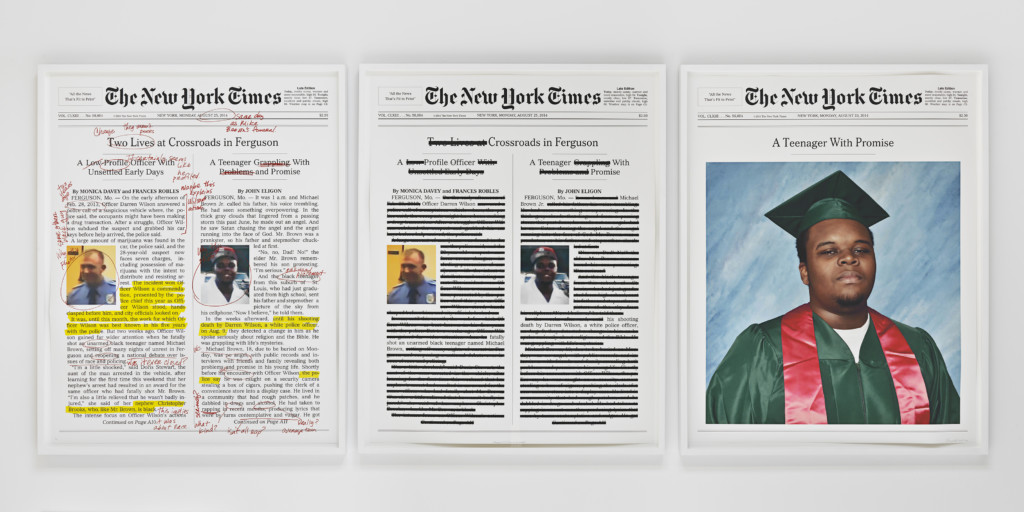 In 2017, large-scale printouts of articles from the New York Times focusing on issues of race started appearing on walls around New York City. This public intervention was created by artist/journalist Alexandra Bell, who conceived these pieces to point out and challenge the way race was portrayed in the paper of record. By anonymously (at first they were uncredited) placing these powerful rewrites at mural-scale in public spaces, Bell presented a counter interpretation of how news stories could have been told, boldly calling attention to journalism’s biases. In these pieces, she marked-up original articles, changing and redacting words and image-text relationships. 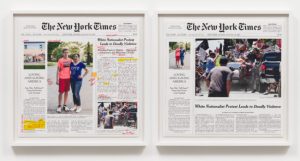 Called, Counternarratives, these works included the triptych, A Teenager with Promise ( 2017-2018), a redesigned front page of the New York Times from Monday, August 25, 2014, in which side-by-side articles under the heading “Two Lives at Crossroads in Ferguson” were printed. In the original newspaper, these articles fall below the fold and contain stamp-size photographs of Officer Darren Wilson and Michael Brown, Jr. In Bell’s triptych she includes an enlargement of the original articles, now positioned directly below the masthead and marked-up with red pen, along with a heavily redacted version, as well as a new configuration that leaves out Darren Wilson’s image and replaces Brown’s photograph with a double column width graduation portrait below the headline, “A Teenager With Promise.” 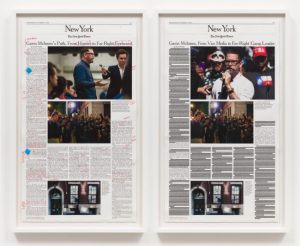 For those who did not encounter Bell’s work in situ, smaller versions cam be seen at Charlie James Gallery. On view are six impactful works: A Teenager with Promise, Olympic Threat, Charlottesville, Tulsa Hate Crime, Venus Williams, Gang Leader. When not redacting the text with a black marker, Bell copyedits the article using a red pen and yellow highlighter, annotating and commenting on the journalist’s choice of words, suggesting ways to change what was written to better communicate “the truth.” For example, in Olympic Threat (2019) the original article that appeared on August 19, 2016, the bottom half of the front page now occupies the full space below the masthead. In the original, the headline: “Accused of Fabricating Robbery, Swimmers Fuel Tension in Brazil” is paired with a photograph of Usain Bolt, who won the 100- and 200-meter race for three consecutive years.

Bell points out that this photograph of the Jamaican athlete has nothing to do with the robbery story. In her revision most of the original text has been obliterated by a black line, except for one paragraph that states: “… privilege…  in a society where many Brazilians themselves often lament their exposure to alarming levels of violent crime and police corruption.” She changes the photograph to an image of the American swimmer Ryan Lochte underneath the text: “Rio Gas Station Footage Reveals White-American Swimmers Were Offenders.” The caption now reads: “Olympic Threat: CCT footage taken from a Shell Station outside Olympic park proves Ryan Lochte’s (above) robbery claim to be false.” In this 2016 scandal known as Lochtegate, members of the American swim team fabricated a story about being robbed at gunpoint.

Bell’s choice of newspaper and articles is not arbitrary. Her work suggests that these pieces of writing and their accompanying images are misleading, racially biased and not necessarily ‘objective.’ She states, “I’m creating a narrative that goes against the dominant narrative put forth by the news.” The work investigates the “complexities of narrative, information, consumption and perception.” While fake news has proliferated in the age of social media, Bell’s project is not to question truth, rather she is interested in pointing out what is missing, what a journalist might leave out and how that might be interpreted, specifically with respect to race. 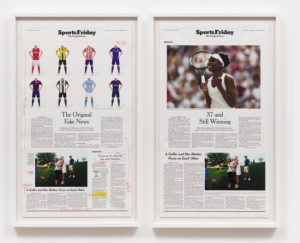 In Tulsa Hate Crime, for example, she changes the headline from “Tulsa Man, Accused of Harassing Lebanese Family, Is Charged With Murder” to “After Years of Racism Toward Neighbors, White-American Man Charged With Murder.” This subtle change redirects the issue. Rather than focus on the fact that the family was Lebanese, Bell articulates the white man’s history of racism. 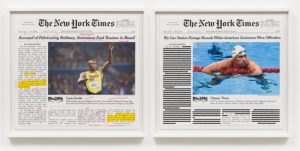 Bell’s Counternarratives exposes the New York Times‘ editorial bias by pointing out issues of racism, and offers suggestions and alternatives to direct viewers to a different narrative. She wants her audiences to question how a news story is framed and for them to begin to see other less racially imbalanced truths.