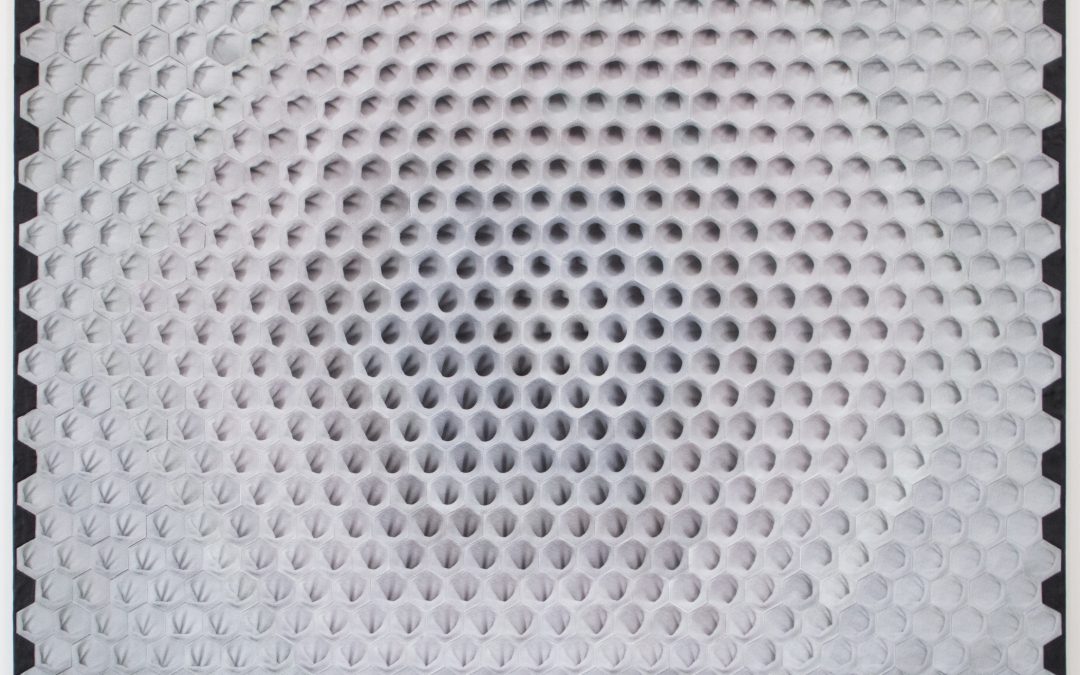 Tim Hawkinson’s much anticipated exhibition at Denk Gallery is a major coup for a small, two-year old gallery. The acclaimed L.A.-based artist (represented by Pace Gallery in New York) has not had a solo gallery show in his hometown for ten years. 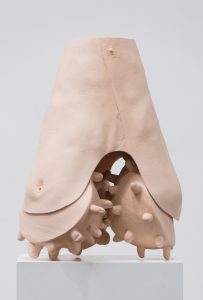 This exhibition is like an intellectual funhouse for adults who enjoy whacky whimsicality. Hawkinson is a bricoleur who tinkers with everyday materials to make quirky gizmos, quasi-anatomical constructions and ingenuous mechanical contraptions that are so baffling, the viewer is left wondering how and why they function and what they mean. But beneath the absurdist humor in Hawkinson’s idiosyncratic multi-medium work lurks an underlying philosophic inquiry into our perception of physical processes – something he conveys through an infectious sense of bewilderment. 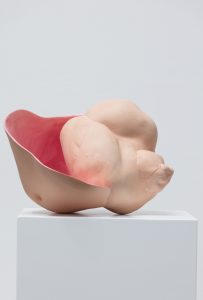 Using a low tech, handcrafted approach and his own handmade toolset, Hawkinson transforms the detritus of the physical world around him – and even his own body parts – into witty, conceptual artworks that explore incongruous possibilities. He uses paper egg cartons, eggshells, grocery bags, mirrored Mylar, old clothes, urethane foam, umbrella frames, steel cans, and even plaster casts of his knees and torso to explore the passage of time in unpredictable ways that makes us marvel at everyday things we take for granted. 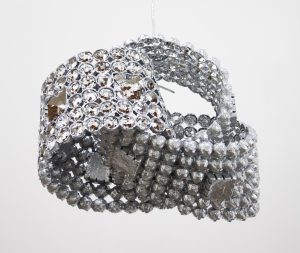 Hawkinson belongs to a lineage of acclaimed L.A artists who are obsessive tinkerers. Like Chris Burden, Mike Kelly, Charles Ray, Jim Shaw and Paul McCarthy, he is an alchemist who mutates mundane junk into complex funk art. But like Bruce Nauman, he also uses his own body as a raw material – making his work more self-referential. Hawkinson, by treating his body like a strange “other,” proves as perplexing to him personally as the world around him. In a fresh riff on self-portraiture, Hawkinson explores his own vulnerability as a physical being who is part of a larger, incomprehensible evolutionary process in a cosmic comedy. 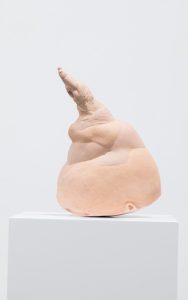 In Butt Head, Personal Shell and Tapered Self portrait, Hawkinson combines urethane casts of various body parts – fingers, toes, knees, uvula, stomach – with outer skin re-imagined as a mollusk-like protective layer with human qualities. In Sock Drawer, he stretches his colonoscopy sock in different angles on a hexagonal wire frame to take photographs that peer inside and have been assembled into a bee-like honeycomb pattern. In Eggshell Torso, the artist compresses chicken eggshell impressions into plaster in something resembling a cross-species anatomy.

Hawkinson is an obsessive problem-solver who invents his own tools as simple solutions to complex problems and sometimes as complex solutions to simple problems – recalling Rube Goldberg machines. To make the dazzling Diamonds (Belt) and Diamonds (Knife) as bejeweled fashion adornments, Hawkinson invented a handmade clamping tool that resembles a cookie cutter, stamping faceted diamond impressions into common Mylar. In Pillar of Fire, Hawkinson fills plastic cartons with the diamond-shaped Mylar to suggest a looming presence that resembles a stadium light. 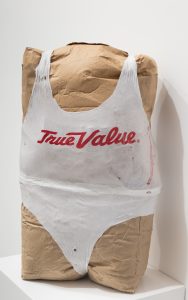 Hawkinson also reconstructed a stapler to make loops from thin strips of Mylar to create an Invisibility Cloak that is suspended from the ceiling like a lavish decorative disguise for a ghost. To make Hybrid (drips) – an ink drawing of a fantastical structure with three axes of rotation that is simultaneously a lighthouse, windmill and water wheel –  Hawkinson invented  an ink gun using a hypodermic needle attached to a garden irrigation valve to drip cross-hatch lines on paper he mounted on a Lazy Susan. 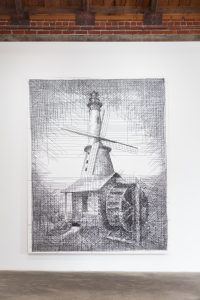 The works in this exhibition also play with scale, ranging in size from the monumental centerpiece Orrery, a motorized Madonna holding a newborn child inside rotating, over-sized hands – with an accompanying gentle sound component from chimes – staged against a sky-blue backdrop made of trashy plastic tarp. Throughout this exhibition, the viewer is startled by unpredictable physical conundrums – rather like entering a conceptual playground for making fun of habitual modes of perception. 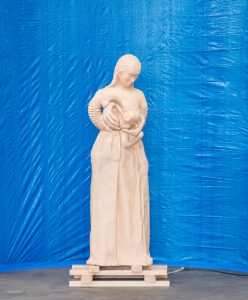 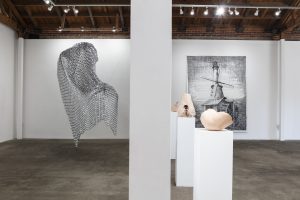