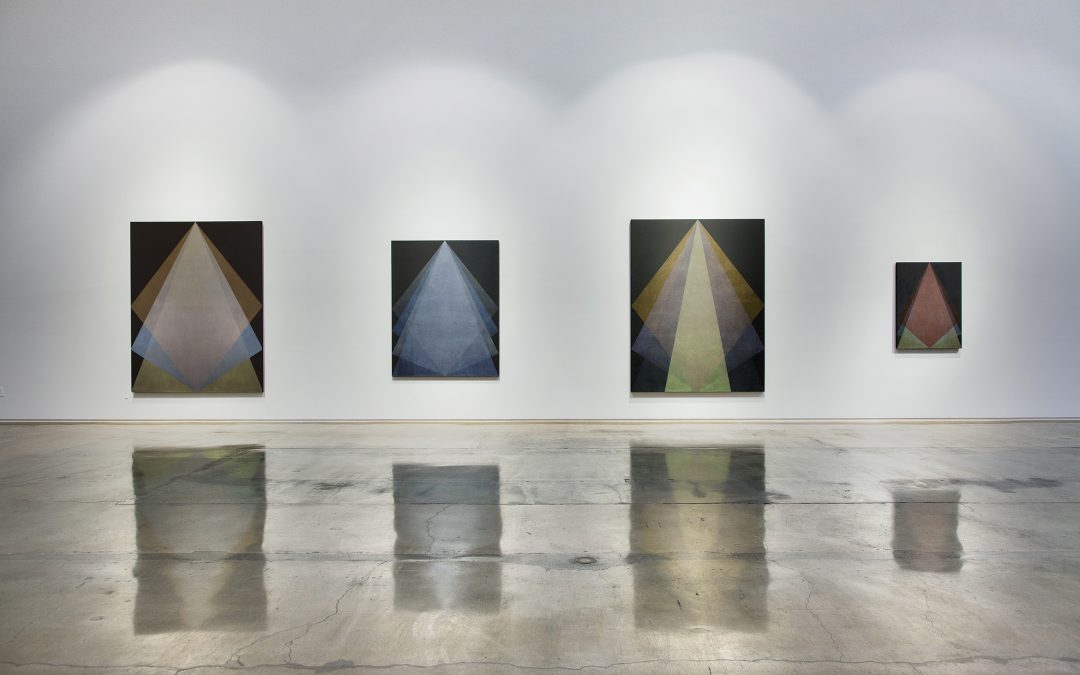 Gonzalo Lebrija’s hypnotic paintings, sculpture and video suspend the passage of time in ephemeral moments that have a mysteriously sublime quality. In his first exhibition at Kohn Gallery, the acclaimed Mexican multi-media artist explores different ways of transforming unassuming commonplace objects into haunting, exalted images that draw the viewer into a contemplative state. 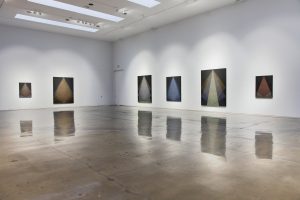 In the main gallery, a series of seven magnificent large scale geometric paintings on linen titled, Veladuras Nocturnas (Night Glazings) use an old master’s technique of progressive glazes to create a sacred aura we associate with religious Renaissance paintings. But instead of using religious narrative or iconography, Lebrija’s minimalist paintings are triangular patterns based on folded paper airplanes he played with in his youth. Like an Origami master using the activity of folding paper to develop attention skills in a meditative practice, Lebrija uses the geometric forms of folded paper to create ethereal paintings that stop time in a dynamic stasis. 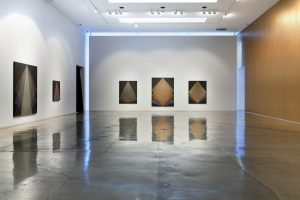 These labor-intensive paintings are made in a devotional way – devoid of pomp and pretense. Lebrija creates spatial depth by using glazes of very thin layers of iridescent paint that make the lower layers of color transparent. Instead of rendered light, Lebrija’s paintings are illuminated by reflected light glowing through overlapping areas of color that create a timeless moment of radiance. These pristine paintings have a kinetic quality when the viewer moves around them and the refraction of light subtly changes the perception of color. Lebrija uses the metaphor of unfolding veils of color to suggest a spiritual revelation – reminiscent of James Joyce’s idea of “aesthetic arrest.” Joseph Campbell developed Joyce’s idea into his famous dictum that, “the function of art” is to create an experience of “radiance held in aesthetic arrest.” 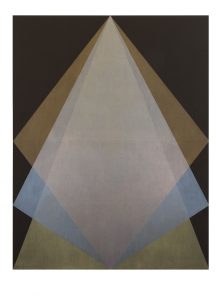 Thus does the radiant quality of these paintings change the aesthetic atmosphere of the gallery into a space of adoration. But the exhibition is also a playful twist on religiosity, because Lebrija uses commonplace things to evoke spiritual emotions that are too vast to comprehend. In a side gallery he places a replica of a cheap Bic lighter on a single plinth to create a tiny flame that remains lit throughout the duration of the exhibition. Ironically, this installation of a humorous shrine is called Eternal Flame. In another gallery, a video of cigar smokers blowing clouds of smoke in a dark room is called, Via Lactea (Milky Way). The celestial quality of the clouds is undercut by the witty reference to the political incorrectness of smoking. 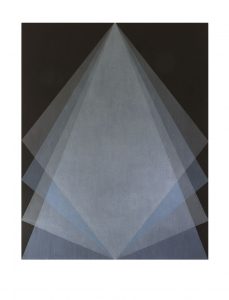 Lebrija explores light, space and time that changes the emotional mood of the gallery’s architecture by transporting the viewer into a devotional state of mind we associate with cathedral architecture. He pays homage to Luis Barragan’s famous ideas about emotional architecture and spaces of adoration by installing the paintings like an altar. Whether he is using geometric patterns from folded paper, a flame from a common lighter, or clouds from cigar smoke, Lebrija plays with poetic paradox to evoke aesthetic emotions. In this conceptually complex exhibition, Lebrija uses different mediums as aesthetic vehicles for making us question what we see – and how we feel about what we see. Lebrija creates extraordinary beauty from ordinary things, holding us in the suspense of a timeless instance of aesthetic wonderment. 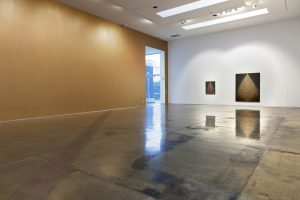 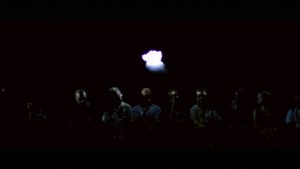