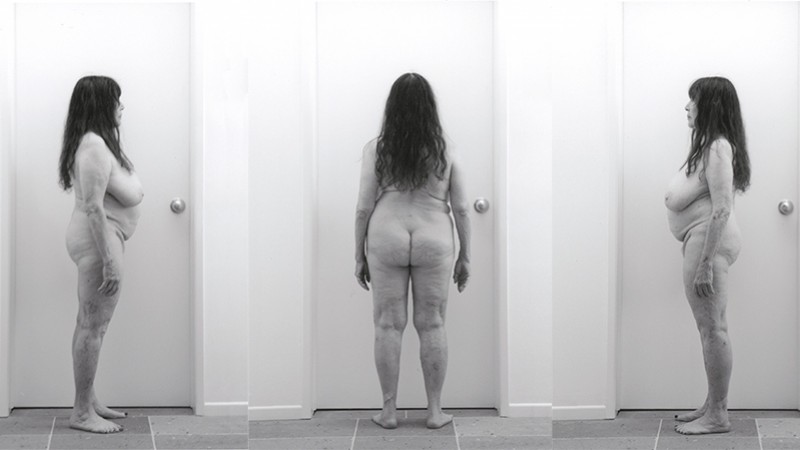 The Los Angeles County Museum of Art is now presenting Eleanor Antin: Time’s Arrow, an exhibition debuting two new works by the artist. One of the most important artists of her generation and a pioneer of performance and conceptual art in Southern California, Eleanor Antin (b. 1935) challenged definitions of sculpture, performance, self-portraiture, and documentation with her 1972 work CARVING: A Traditional Sculpture. Consisting of 148 black-and-white photographs, CARVING shows the transformation of Antin’s body as she lost 10 pounds over 37 days. In 2017, Antin restaged her landmark performance. In CARVING: 45 Years Later, the artist again documented herself as she “carved” her body, producing 500 black-and-white photographs over the course of 100 days.

“For 50 years, Eleanor Antin has been a pioneering voice in contemporary art—one of the progenitors of performance and conceptual art in Southern California,” said Dhyandra Lawson, curatorial assistant in the Wallis Annenberg Photography Department at LACMA. “We are excited to debut Antin’s new work CARVING: 45 Years Later, a monumental, intensive restaging of her classic piece.”

“LACMA has been a longstanding champion of Antin’s work,” said LACMA CEO and Wallis Annenberg Director Michael Govan. “In 1999, LACMA organized Eleanor Antin, a major 30-year survey of her career, and more recently in 2009, presented Classical Frieze: Eleanor Antin. We’re also fortunate to host some of Eleanor’s most iconic artworks in our collection, including 100 Boots (1973) and Recollections of My Life with Diaghilev, 1919–1925 (1977–80), and several of her seminal video works such as Representational Painting (1971), The King (1972), The Ballerina and the Bum (1974), and The Angel of Mercy (1977–81).”

A key conceptual artist of the 1970s, Eleanor Antin is known for a groundbreaking practice that spans five decades and has covered themes surrounding identity, gender, autobiography, class, and social structures. Antin’s multidisciplinary approach includes installation, painting, drawing, writing, and, most notably, photography and performance. Rearticulating historical narratives, both real and fictitious, she explores the tropes of feminist and conceptual art. She remains one of the world’s leading feminist artists.

As a performance artist, Antin has appeared in venues all around the world, including the 37th International Art Exhibition at the Venice Biennale, Italy (2005), and the Sydney Opera House, Australia (2002). Her work is included in many other important public collections such as the Art Institute of Chicago; Whitney Museum of American Art; Museum of Modern Art (MoMA); Jewish Museum; and San Francisco Museum of Modern Art, among others.