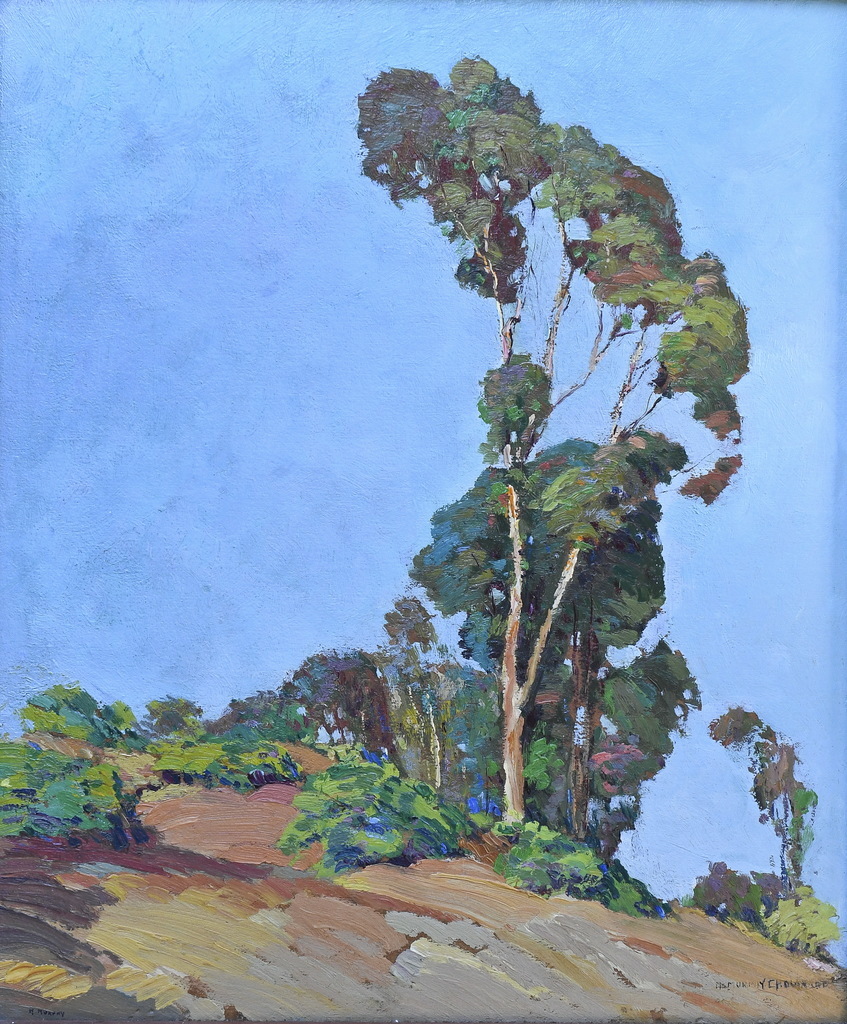 Pasadena Museum of History has announced the gift of five recently rediscovered works of art by the noted artist and educator Nelbert Chouinard (1879-1969). In addition to original works by Chouinard, the gift also includes family memorabilia and photographs from the Chouinard family. A total of three landscape paintings, two preparatory sketches, and the additional materials will become part of the permanent collection at PMH thanks to the generosity of the Chouinard family and the efforts of art historians and curators Maurine St. Gaudens and Joseph Morsman.

The paintings and sketches are currently on view in the museum’s nationally-acclaimed exhibition, Something Revealed; California Women Artists Emerge, 1860–1960, which runs now through March 31, 2019. “It seems like kismet that led Nelbert’s paintings to this particular Museum,” enthused the artist’s niece, Karen Laurence. “Aunt Nelbert would be so pleased to see her work on the wall in that lovely museum where they seem perfectly at home.”

Nelbert Chouinard (born Nelbertina Murphy) played a leading role in the arts community in the development of arts education in Los Angeles; educating a who’s who list of artists, animators, and designers whose work has contributed to and influenced twentieth century. After moving to Pasadena from the East Coast at the age of thirty, she taught at the Polytechnic Institute (now Caltech) under Ernest Batchelder, at the Batchelder School of Design, and at Pasadena’s Polytechnic Elementary School. The artwork she created prior to settling in California and later in her South Pasadena Studio was exhibited nationally, with her first solo exhibition taking place in Pasadena in 1916. Following her marriage to Horace Chouinard in 1916, Nelbert relocated first to Texas and then to Washington, D.C., only to suffer the tragic loss of her husband just two years later.

Returning to California, Nelbert was recruited to teach at the Otis Art Institute, Los Angeles. In 1921 she founded the Chouinard Art Institute, which she oversaw until the 1960s. With the establishment of the institute, Chouinard devoted her life to the education and scholarship of generations of artists.

Nelbert Chouinard passed away in Pasadena on July 9, 1969; the Chouinard Art Institute was merged with the Los Angeles Conservatory of Music under the auspices of Walt and Roy Disney in 1961 to become the California Institute for the Arts (CalArts), which to this day is recognized as one of the leading art schools in the nation.

“We are thrilled to add artwork by Nelbert Chouinard to the Museum’s fine art collection,” notes PMH Executive Director Jeannette O’Malley. “As a significant contributor to the development of arts education in California, Nelbert is the epitome of what Something Revealed represents, and we look forward to sharing her art and legacy in the future.”