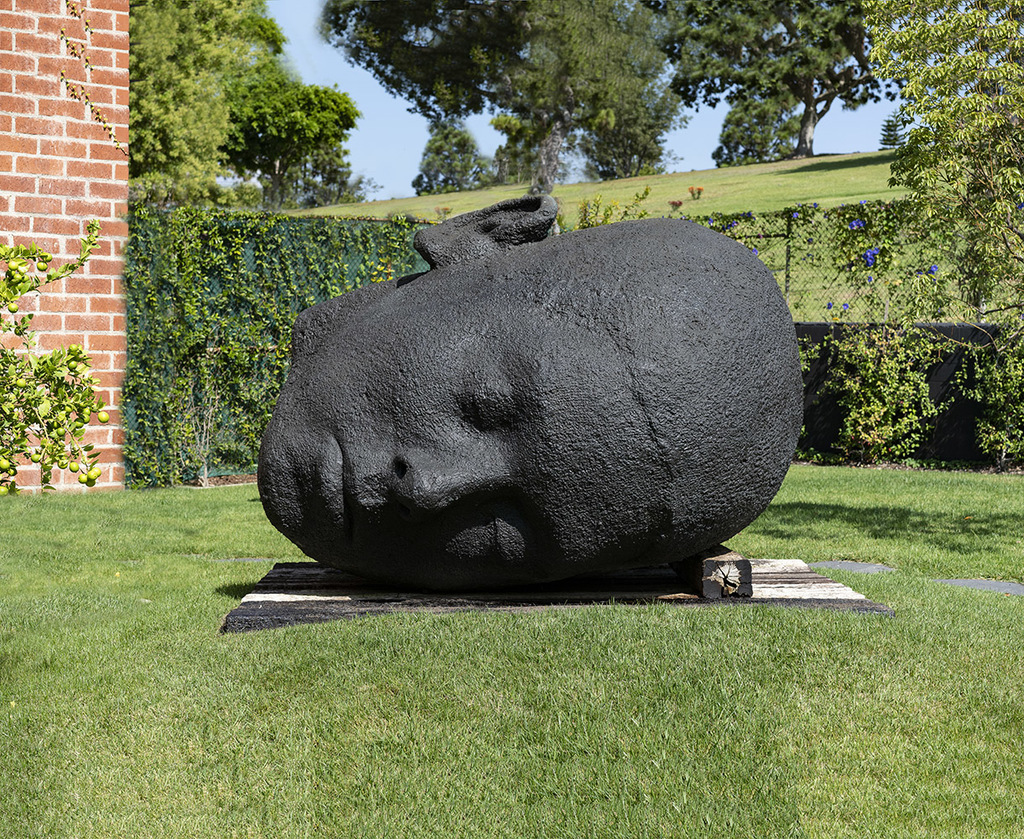 Two bronze sculptures and a painting by contemporary Cuban-American artist Enrique Martínez Celaya (b. 1964) will be installed at The Huntington Library, Art Collections, and Botanical Gardens this month. All three works are on loan to The Huntington and mark the start of a multiyear visual arts partnership with Martínez Celaya. The sculptures, The Gambler (a life-size depiction of a boy on crutches carrying a house on his shoulders) and The Landmark (a six-foot-high human head positioned on its side) will join other bronzes in a garden adjacent to the Virginia Steele Scott Galleries of American Art on January 30. The painting, The Crown, a fairy tale-like image of a boy in a forest, was installed in the Huntington Art Gallery on January 23.

As a visual arts fellow, Martínez Celaya—who is also an author, poet, philosopher, physicist, and Provost Professor of Humanities and Arts at USC—will work among The Huntington’s vast history, literary, art, and botanical collections to produce a new work or program for visitors.

“I am thrilled to be able to welcome Enrique and his works to The Huntington,” said Christina Nielsen, Hannah and Russel Kully Director of the Art Collections. “Working simultaneously as an artist and a scholar, Martínez Celaya is ideally suited to collaborate with us here—a place that features galleries of important works of art, sponsors humanities research, and whose collections speak to such topics as identity, history, memory, and nature that resonate with his work.”

Martínez Celaya was born in Cuba and raised in Spain and Puerto Rico. He began his formal training at the age of 12 as an apprentice to a painter and developed what was to become an enduring interest in writing and philosophy in the turbulent Puerto Rican cultural and political environment of the 1970s. He studied physics at Cornell University and received his master’s degree in quantum electronics from the University of California, Berkeley. “My artistic practice incorporates literature, philosophy, and science as well as art theory and history,” he said. “So, of course I love The Huntington. I’m honored and delighted to have been given the opportunity to work with the collections there.”

Catherine Hess, The Huntington’s chief curator of European art, who coordinated the arrangement with Martínez Celaya, said, “The content of Enrique’s figural work is moving and poetic. I think the three extraordinary works coming here will present imagery and messages that will be accessible in new ways to our audiences. I can’t wait to see what he produces during his time here.”

Martínez Celaya has said his work is concerned with the “existential condition of belonging.” With The Gambler, he portrays a young boy carrying the idea of home and identity with him, committed to bringing it with him into the future. The weight of the sense of home appears significant—the boy stoops to carry it with the support of crutches—but he also shows the necessary conviction and resolve to keep it with him and carry it forward. “The memory of ‘home’ and the idea of ‘belonging’ is something we all endeavor to carry with us,” Hess said. “The elements of this sculpture—schoolboy clothing and home—are meant to be non-specific in terms of place and time, and so, are universal.”

According to the artist, the title “refers to the wager we make as we take on our journey. It is a gamble, a trust that there is something ahead, as well as a conviction that what we have been must be accounted for, regardless of its burden.”

Surprising for its large scale and sideways position, The Landmark literally turns Western sculptural tradition—which is represented on The Huntington’s grounds by a significant collection of 17th- and 18th-century European works—on its ear. Although the artist’s son served as the model, the head evokes both universality and monumentality. The closed eyes of the enormous head suggest the process of reminiscing and imagining. “When you think about it, everything we see that surrounds it as we pass by soon becomes a memory,” said Hess. The title refers to the sculpture as a “marker” on the landscape, pointing out how the natural setting around the work is important and specific, an active participant in its content.

In the Huntington Art Gallery, the historic residence of founders Henry and Arabella Huntington, where masterpieces of European art from the Renaissance to the early 20th century are displayed, The Crown will be eye-catching and thought-provoking to visitors, says Hess. In the work, a young boy stands alone in a snowy forest; a glow, perhaps of the moon, in the distance enhances both the beauty of the scene and the solitude of the landscape. “Is this image from a fable or fairy tale?” Hess asks. The play between the allegorical and the factual—between the symbolic crown and the boy and birch glen—produces a sense of surprise as well as of deep recognition and nostalgia. “This is a portrait with many traditional compositional elements, too,” she said. “It is clearly made in the present time, but is also of the past, perhaps of our collective memory.”