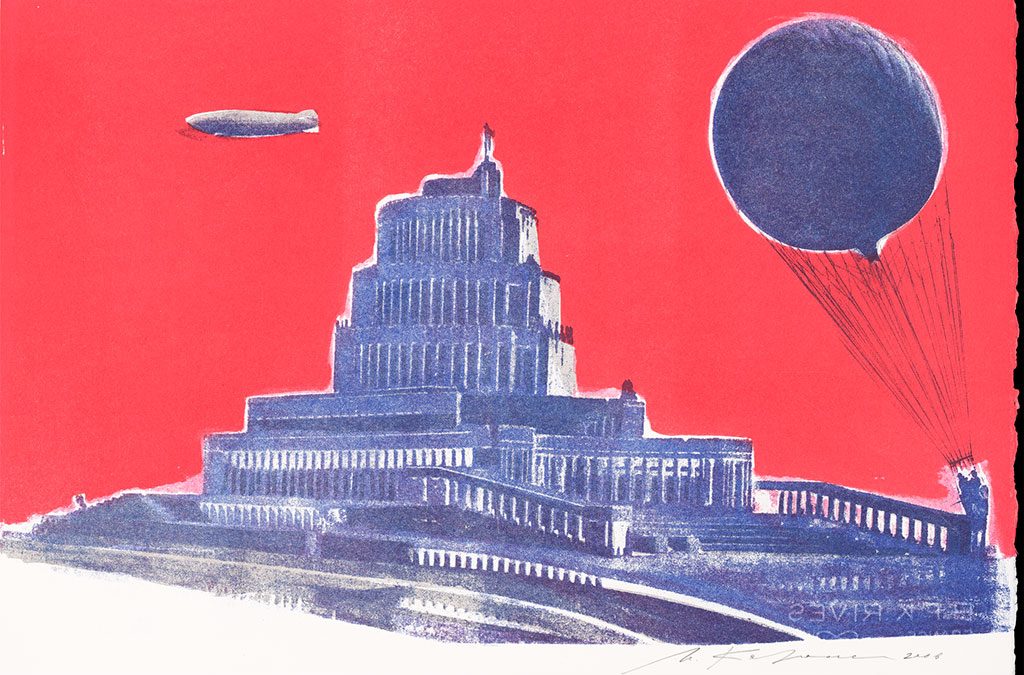 As the role and meaning of monuments in contemporary culture takes on new urgency, the Getty Research Institute (GRI) is presenting an exhibition that connects these contemporary concerns to the past. MONUMENTality, on view at the Getty Center from December 4, 2018 through April 21, 2019, invites viewers to consider how the meanings of monuments can change over time and why some monuments endure while others fall.

“In organizing both this extraordinary exhibition and the current scholar year theme, the Getty Research Institute has focused on an especially timely subject – monuments and monumentality. Here, art history has very contemporary implications as many people, especially in the U.S., are passionately debating and re-examining the roles that monuments play in our communities and cities,” said Andrew Perchuk, acting director of the Getty Research Institute. “The GRI’s special collections are a rich    source of archival material that makes it possible to take a broad view of both the varied life of monuments and the concept of the monumental from the classical to the contemporary.”

The exhibition investigates various paradigms of monumentality generated through systems of belief and structures of power, presenting historical rare books, political ephemera, photographs and contemporary art about or inspired by monuments from antiquity to present day.

Objects in the exhibition date back to the 16th century, depicting early modern as well as classical monuments. For example, the renowned 18th-century printmaker Giovanni Battista Piranesi created grandiose reconstructions of Ancient Rome and a detailed scrolling engraving of Trajan’s column, erected in 113 CE. Rare 19th-century photographs document rebelling citizens during the 1871 Paris commune surrounding the toppled statue of Napoleon Bonaparte in the Place Vendôme, illustrating how the erection and destruction of monuments has been a recurring theme from antiquity to the present.

Among the oldest monuments explored in the exhibition are the Nazca lines, hundreds of ancient geoglyphs drawn into the southern desert of Peru by the Nazca people between 200 BCE and 500 CE. Recorded by photographers in the 20th century these enigmatic monuments are subject to plentiful theories about their meaning and purpose. In the exhibition, they are represented through photographs by Edward Ranney (American, b. 1942) who visited the sites repeatedly throughout the last half of the 20th century.

Juxtaposed with the Nazca images are photographs of earthworks created in the 1960s and 1970s by American artists who drew inspiration from these ancient monuments.

“Just as size and scale have been important in human efforts to mark cosmic and geological time, they are used by artists to invoke the monument and locate meaning. The phenomenology of the monument, the power structures behind monuments, and the meanings of monument, even when lost, are compelling subjects for contemporary artists,” said Frances Terpak exhibition co-curator and curator of photography at the Getty Research Institute. “Monuments are often made by artists but artists also take on the monument as a subject for exploring, deconstructing, and challenging.”

One of the newest objects in the exhibition is a deconstructed monument by Theaster Gates who is currently the artist in residence at the Getty Research Institute. For this exhibition Gates has toppled his own monumental piece Dancing Minstrel, 2016/18. Originally exhibited in 2016 as a larger-than-life bobble head depiction of the racist trope of the black minstrel, the installation at the Getty features the oversized parts of the figure scattered across the floor, a dramatic dismantling of a racist stereotype.

The exhibition also considers monumentality in relation to cities, both real and imagined. Design proposals and plans for the never-built Palace of the Soviets submitted during and after a major international competition in 1931-1933 placed alongside a utopian plan to connect East and West Berlin at the height of the Cold War reveal how power is envisioned through the construction of the city and its monuments. The connection between monuments and the built environment is further explored through printed material, photographs, and ephemera. The impulse to document Los Angeles, for example, has spawned projects of enormous scope – such as Ed Ruscha’s extensive photo-documentations of Los Angeles Every Building on the Sunset Strip, 1966 and Hollywood Blvd, 1973 and 2002 and Lane Barden’s Linear City, a monumental tool for envisioning the city at the start of the 21st century by mapping its main arteries: water, rail, and automotive.

“Monuments, though often meant to stand for eternity, can physically change over time – from erosion, looting, war, or iconoclasm – or they can stay intact but change in their meaning, losing context or relevance, or becoming integrated with daily life in new ways. And monuments can form organically, through the ways that people interact with the built environment,” said Maristella Casciato, exhibition co-curator and curator of architecture at the Getty Research Institute. “MONUMENTality investigates the ways that monuments are necessarily dynamic, ultimately reflecting, through their endurance or failure, the world around them.”

Stas Orlovski: ‘The running man has nowhere to go’