Max Hooper Schneider: ‘Tryouts For The Human Race’
Worlds of Chaos and Excess 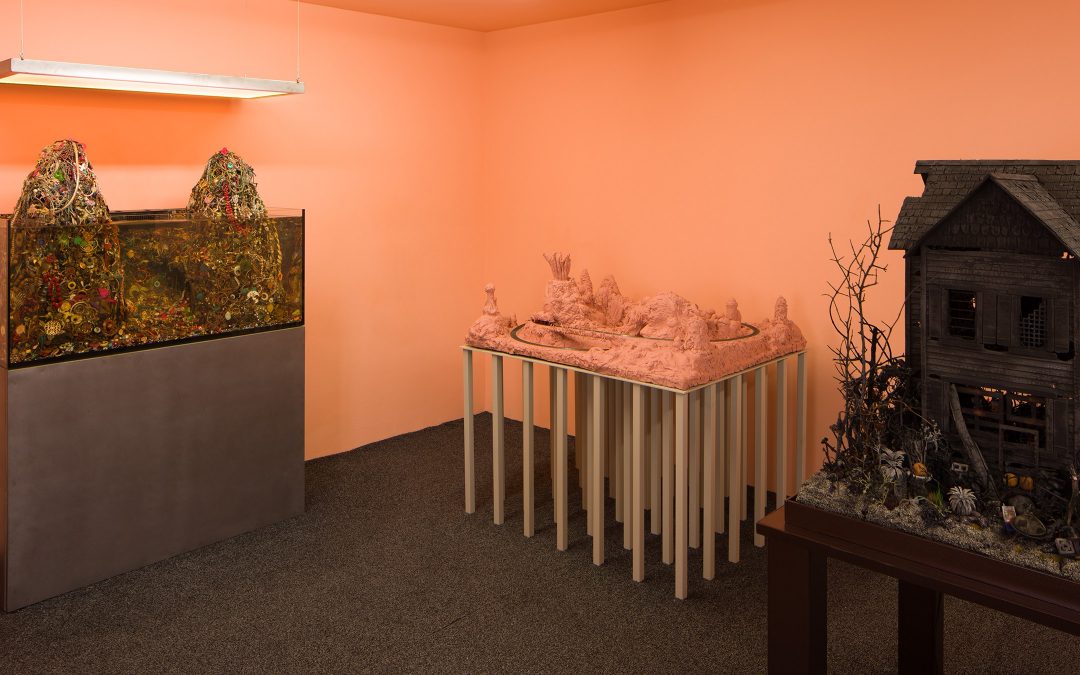 Tryouts For The Human Race

In his exhibition, Tryouts For The Human Race, Max Hooper Schneider constructs four different worlds. Each sculpture is a table-top diorama filled to the brim with a wide range of objects and creatures. In talking about his practice, Hooper Schneider who studied biology and urban design and has a master’s degree in landscape architecture, states, “at the forefront of my practice is the question: ‘What is containment?'” 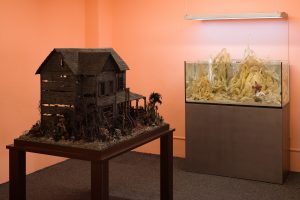 The four floor-based works presented in Jenny‘s small gallery space are seen in relation to off-putting pinkish, orange toned walls. Two of the four pieces are functioning aquariums; one a live marine ecosystem, the other using freshwater. Both are filled with fish as well as mountains of “stuff.” In Genesis (all works 2018) the glass container overflows with plastic and metal detritus — colored necklaces, pendants, beads and earrings that become two heaping mounds towering above the top of the fish tank. Placed underneath a custom LED panel, this apocalyptic landscape glows in the light. It is reminiscent of a trash heap or a sci-fi landfill. Within this murky world swim iridescent fish: genetically modified Danios scurrying amongst the debris. 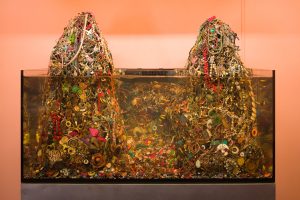 Across the room sits Lady Marlene, a similarly configured aquarium, though Marlene is filled with sea water rather than fresh water. In addition to fish, it also contains a weird assortment of invertebrates — colorful crabs and oddly shaped star fish. These creatures crawl across off-white toned, plastinated lingerie — weathered lace tops, bottoms and other once sexy accoutrements that have lost their seductive appeal. 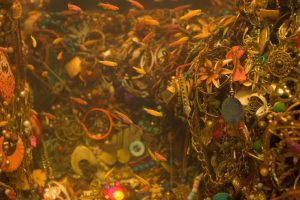 Utopia is a dystopic paradise through which loops a toy train. The fabricated environment is a wasteland of protheses — disparate body parts submerged in a pink, clay-colored muck. The dilapidated house in Mommy & Me is in ruins. Its walls have eroded and its floors and surroundings are littered with miniature refuse— statues, dollhouse furnishings, representations of the natural world: trees, plants and animals in nonsensical relationships, as well as the aftermath of scenes of violence — suicide by hanging and a bloodied guillotine. Is this a place where a runaway seeks shelter? Or is it an amalgamation of the settings of numerous horror films? This house of chaos and excess is as fascinating as it is uninviting. 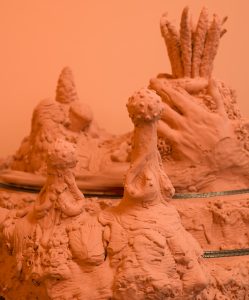 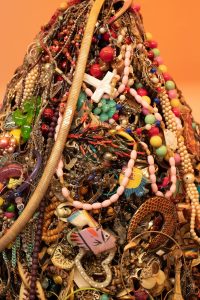 While each sculpture is a self-contained world, Hooper Schneider understands that there are set boundaries and parameters that need to be upheld. For example, the fish need to be fed, the water cleaned, the train powered. As dynamic cabinets of wonder, filled with life, Hooper Schneider’s containers are like stage sets where controlled as well as unexpected events transpire. The works are open to interpretation and are not prescriptive. Rather, they are fluid, unending narratives about over abundance, consumer culture, waste and excess. In his sculptures, Hooper Schneider has manifested dependent living systems to investigate the potential clash between humans and the natural environment. 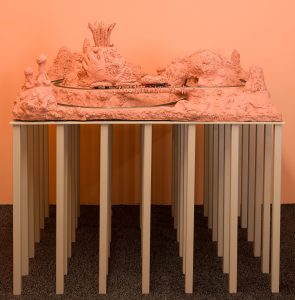 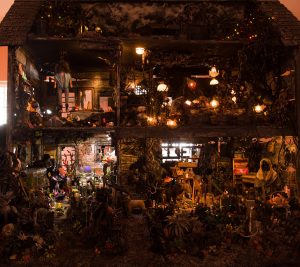 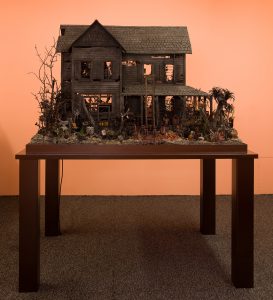